The proteins behind fuzz removal

Often industrial cellulases used in textile processing are random multi-component enzyme systems containing variety of different activities, many of which could be redundant for a particular application. Epygen scientists have initiated enzyme protein research paired with study of properties and morphology of textile fibre to identify the best synergy responsible for Efficient Fuzz Removal in cotton knitted single jersey scoured and peroxide bleached fabric.

It is believed that, in a typical bio-finishing application, while enzyme reaction proceeds on the fibre, intensive mechanical contact, generated by the equipment (a Jet Dyer or Soft Flow machine) results in breaking off the fibre ends, already weakened by enzyme treatment. At uncontrolled enzyme hydrolysis, significant weight and strength losses can occur, surpassing the benefits of the desired finish. To study this balance, multicomponent acid cellulases are compared against monocomponent and endo-enriched cellulase on cotton single jersey knitted fabric in Pilot scale soft over-flow machine. Enzyme dosage were ascertained on equivalent standards of specific cellulase activities.

Structurally, individual polysaccharide chains adhere to each other along lengths by hydrogen bonding and Vander Waals forces. The physical properties of the cotton fibre as a textile material, as well as its chemical behaviour and reactivity, are determined by arrangements of the cellulose molecules with respect to each other, to the fibre axis and their accessibility.

Naturally, wood degrading fungal and bacterial cellulolytic (whole) enzymes consist of several enzymes acting at the ends (exoglucanases, also called cellobiohydrolases) or in the middle (endoglucanases) of the cellulose chains. Trichoderma reesei is one of the highly exploited strains for cellulase production, whose cellulolytic enzymes are supposed to be primarily composed of two cellobiohydrolases (CBHI and CBHII) and at least six endoglucanases (EGI, EGIl, EGIII, EGIV, EGV and EGVI) and two - glucosidases.

It is known that, while the endoglucanases mainly hydrolyse internal bonds in the cellulose polymer producing new chain ends and thereby causing a considerable decrease in cellulose DP, Exoglucanases initiate the hydrolysis at the chain ends, and do not produce significant amounts of new chain ends on the cellulose surface. While CBHII splits cellobiose from the non-reducing and CBH I from the reducing ends of the cellulose chain, Cellobiohydrolases can also act on crystalline cellulose without the aid of endoglucanases. -glucosidases complete the hydrolysis process by catalyzing the hydrolysis of cellobiose to glucose. However, through several experiments, scientists have realised that an efficient overall hydrolysis of crystalline cellulose can only be obtained by a synergistic action of both EGs and CBHs. The challenge had been to identify the right mix of enzymes to obtain the textile effects one is looking for.

Though with often changing fashion moods, the scientific targets in this discipline underwent shifting priorities, over last several months, our scientists are trying to nail down the mystery behind Fuzz Removal and this presentation is a part of that progress.

Usually fungal cellulases consist of two domains, i.e. a larger catalytic domain and a smaller cellulose binding domain (CBD). These domains are joined by a glycosylated linker peptide. Amongst the researched T. reesei cellulases only EGIII goes with catalytic domain alone and lacks the CBD and linker region. It is postulated that the Catalytic domain contains an active site with the shape of a tunnel (to chew off the reducing ends in CBH) and an open cleft (to dig in the internal bonds in EGs). The diameter of the catalytic cores of CBHs being 60 to 64 A and the length of the whole enzyme is about 180 A for CBHI and 210 A for CBHII. It has been observed that the presence of CBD is essential to the degradation of solid crystalline cellulose, an important consideration of our biofinishing or fuzz removal application. 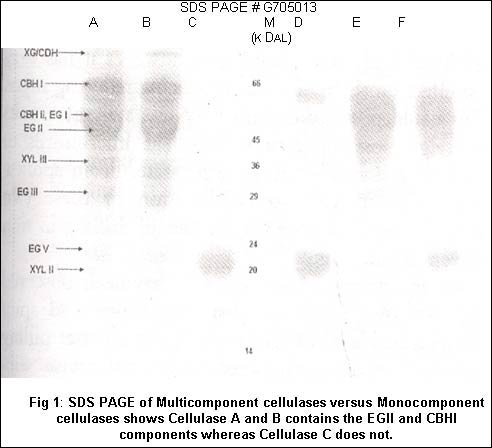 Specific Enzyme Activities were assayed by estimation of reducing sugars by the action of a cellulase on a standard cellulosic substrate, where one unit of activity liberates 1 micro mole of reducing sugar (expressed as glucose equivalents) in one minute under the conditions described. The sample activity is then related to a standard with a stated CMC DNS activity

The Filter Paper Assay was based on protocol developed by Dr. Ghose in 1984, which uses the Dinitrosalicylic acid (DNS) method to determine reducing sugars released from 50 mg of Whatman # 1 filter paper by a complex cellulase mixture.

Polyacrylamide Gel Electrophoresis Technique (SDS PAGE) was used to separate protein molecules in the cellulase based on size, shape and isoelectric point. The gel is a cross linked polymer matrix used to support and separate the protein molecules, by applying an electric current to the gel and allowing the proteins to migrate though the matrix pulled by the sodium dodecyle sulfate. 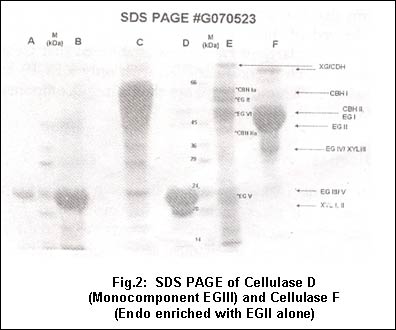 SDS page columns were loaded with enzyme samples at equivalent specific activity based on the reducing sugar values, to compare the enzymatic components and distribution of cellulase A to C and D to F. Fig. 1 shows that Cellulases A exhibits a combination of EGII and CBHI and Cellulase C exhibits the bands for a EG Monocomponent protein. Fig. 2 shows the second set of cellulases where Cellulase D exhibits a EGIII monocomponent (without CBD) and the Cellulase F shows a EGII enriched profile.

Cotton single jersey knitted fabric pieces were treated with the enzymes compared in SDS PAGE and it was observed that (Fig. 3) cellulase with a synergy of EGII and CBHI (Cellulase A) demonstrates much better fuzz removal compared to a monocomponent EGIII (Cellulase C). This also confirms that the property of Trichoderma EGIII, that it is derived of the CBD, heavily affects its hydrolytic ability. Similarly in Fig. 4, it is established that Cellulase F (which is endo enriched with only a EGII) has a better fuzz removal capacity than a monocomponent EGIII (Cellulase D). 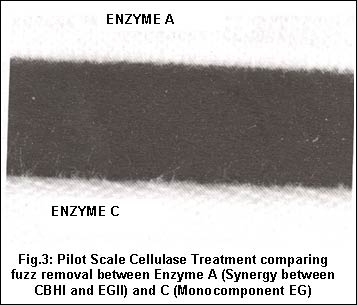 It is understood that effect of the endocellulases in cellulase mixtures increases with mechanical agitation, whereas the relative exo-activity is reduced. Factors that affect mechanical action being equipment type and design, process time, load size, liquor ratio and rotation speed. Therefore, for a dynamic process like Jet or Soft Flow, an Endo Cellulases would bear more impact. 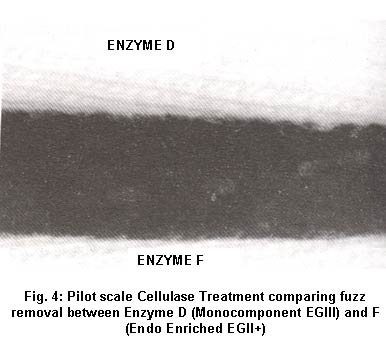 Confirming the lines of past research, it is proved from these experiments that a standalone EGII can have positive effect on pilling properties of knitted fabric. Though purified components of CBHI and CBHII has not been reported to improve pilling properties, the interesting observation is that a synergistic combination of CBHI and EGII has been observed to have more pronounced effect on pilling, even more than the standalone EGII

Though an aggressive EGII attack may cause development of cracks on the fibre surface resulting in increased fibril generation, it is possibly the lack of crystallinity in each microfibril generated, which results in their shedding off and seems to nearly shave off the fabric surface at the end of the application.

Looking at other possible synergies, it is estimated that a EGI - CBHII couple could also potentially result in significant weight loss; however it has very less effect on the hydrolysis producing reducing sugar. This could possibly explain why this synergy results in weight loss but cannot cause the micro fibrils to shed off and finally totally degenerate. From application point of view, a combination of these two proteins could increase the menace of dusting in non woven bio-finishing.

As an ending consideration, it has been observed that for some type of fabric (e.g. open end spun fabric) a standalone EGII could exhibit a better pilling removal tendency compared to the otherwise winning combination of a EGII and CBHI, indicating that the type of fabric still has a role to play in determining the best candidate to ultimate FUZZ removal. But till this point, EGII appears to be the uncontested winner.