Utilization of natural substances as sedimentation aids for clarifying effluents in the textile industry long predates written history. The first specific mention of lime and aluminus earth for this purpose appeared in the latter part of the first century AD. Use of such aids in large industrial plants appears to have started in the first part of the nineteenth century. In 1951, ushered a new era in solid liquid separations by chemical reagents. They were the first of a wide range of flocculants tailored to meet many needs such as clarification of water, treatment of municipal sewage and industrial wastes, textile, pulp and paper mills effluents etc.

In the market place, selection of a flocculants depends on optimizing the cost to performance ratio that is achieving desired performance at a minimum cost. Although a systems point of view predominates {including flocculant availability, reproducibility, handling, storage, tolerance to fluctuations in treatment plant loading, while meeting out put specifications, equipment in place and necessary modifications etc }, the delivered cost per unit weight of individual flocculants always enters as one factor. Consequently, a relatively few monomers suitable for incorporation in to water soluble polymers and produced on a sufficiently larger scale to have low cost, are the major building blocks for commercially important synthetic polymeric flocculants. In the absence of flocculating agent, the energy of interaction between a pair of particles { a factor in formation of aggregates } traditionally is formulated as arising from two components, a term a rising from overlap of double layers leading to repulsion, which leads to van der Walls attraction. Since dispersion forces are short range, the particles must be close together before a significant attractive force develops. The distance of closest approach for colloidal particles is strongly influenced by the magnitude of the double layer, which therefore, influences the stability of a suspension. Flocculating agents enhance aggregation either by modifying these energy terms or by introducing new interaction terms, there by destabilizing the suspension and effective solids liquids separation. Emphasis on electrostatic stabilization of suspended particles in an aqueous substrate does not imply the absence of other kinds stabilization. The surface characteristics of particles range from hydrophobic to hydrophilic. Suspensions of hydrophobic particles such as minerals, tend to be stabilized primarily by surface charge.Hydrophylic particles, such as sewage sludes are stabilized by solvation as well as charge. For example, the hydrophilic surface may result from a coating of firmly anchored polysaccharide or similar polymeric species with loops of the polymer extending out from the particle surface in to the aqueous phase. When two particles approach one another and the polymer 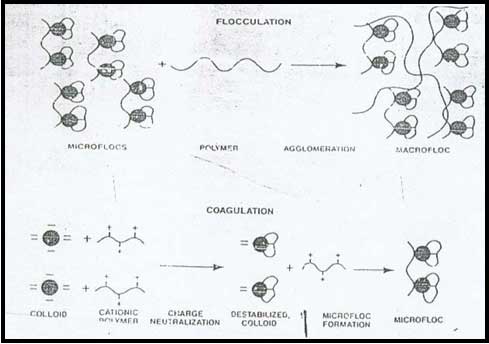 segments interpenetrate . Solvent molecules are forced out of interpenetration volume. There is free energy associated with the solvent exclusion called steric stabilization, which provides the thermodynamic barrier to close approach of particles. The flocculants currently in commercial use can be conveniently classified as inorganic, synthetic organic and those derived from natural products { naturally occurring organic polymers which may have been modified chemically. These flocculants, polyelectrolytes are they are called, have very high molecular weights and are fully soluble in water. They have the ability to bridge between suspended particles.

There appears to be five general modes by which flocculating agents bring about destabilization of aqueous suspensions, double layer compression, specific ion adsorption, sweep flocculation- enmeshment, polymer charge patch and polymer bridging. More than one mode of action may be involved at the same time in any real flocculating system. Flocculation would be spontaneous if not for factors which impart stability to suspensions. All particles exert mutual attraction forces effective only at short distances. This results in overall attraction and natural coagulation takes place. However, suspensions are rendered stable by repulsion forces, which prevents particles from coming close enough for these attraction forces to take effect.

There are two main sources of these repulsion forces.

1:Water is adsorbed from the surroundings on to the surface of the particles forming solvation layers, which repel one another.