To produce PTA oxidation of Paraxylene accomplished in Acetic Acid in presence of metal catalyst like (Mn+2), Initially (CTA) crude Terephthalic Acid was obtained and then purified. Thats why its called Purified Terephthalic Acid. In manufacturing technology wise there would be change but general outline is same for all the technology providers. The reactions of importance are shown in the following chemical equations (the two moles of water formed by the selective oxidation of Paraxylene is not shown): 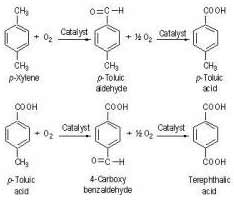 Purification of Crude Terephthalic Acid requires at least one chemical step in addition to the physical procedures (e.g. crystallization, washing).  One of the major impurities, 4-carboxybenzaldehyde (4-CBA), is quite difficult to remove by physical means but can be converted to para-toluic acid by catalytic hydrogenation in an aqueous solution as shown in the following equation:

The technology consists of the following major processing steps:

In the process Paraxylene is catalytically oxidized to Terephthalic acid in one step. The catalysts (cobalt and manganese acetates and a source of bromide) and some recycled acetic acid solvent are pumped to the oxidation reactors.  Titanium reactors are needed because of the corrosive environment posed by the acetic acid and bromide solution.  The amount of catalyst and solvent used and operating conditions must be tailored for optimum yields and product quality.   The weight ratio of solvent to hydrocarbon in the oxidation reactor may range from 3 to 5.   The catalyst is usually 0.1 to 0.2 weight percent of the solvent used.  The ratio of bromide promoter to catalyst may vary widely from 1/10 to 10/1 atoms of catalyst per atom of bromine.   When the first methyl group of Paraxylene is oxidized, the rate of reaction is greatly diminished due to the electronic deactivation of the ring.   The de-carboxylation of acetic acid and aromatic acids by cobalt at elevated temperature is overcome by the presence of bromide and manganese in the catalyst system.   Each of these components effects rapid electron transfer away from the cobalt component and thus decreases de-carboxylation reactions.

Modern plants use continuous oxidizers with air sparged through agitated vessels.  The heat of reaction is removed by condensing, usually by raising steam, and refluxing solvent, Paraxylene, and water vapors.   Temperature and pressure in the reactor are typically between 185 and 204C and 12 and 17.2 bar.   Residence time is typically less than one hour for nearly complete conversion of Paraxylene, and the yield from this step is about 98 mole percent. Oxygen, usually from air, although oxygen-enriched air can be used, must be supplied to the reaction zone in excess of the stoichiometric requirements; it is normally maintained at 2 to 4 mole percent (volatile-free basis) in the vapor space above the reaction zone.  Some acetic acid is destroyed by oxidation.   The off gas from reaction is processed in a number of ways before discharging to atmosphere to meet environmental standards. The reactor products are continuously discharged from the reactor as a hot slurry of CTA in acetic acid into a crystallizer where cooling takes place by flashing off part of the acetic acid, small amounts of unreacted   Paraxylene, and reaction water.   Air can be supplied to this crystallizer to facilitate further reaction of Paraxylene and intermediates.   The crude Terephthalic acid is crystallized, centrifuged or filtered, and dried before further purification to fiber grade PTA.

Hydrogenation is used to remove impurities from the PTA that would result in discoloration of the eventual polyester. The major impurity, 4-carboxybenzaldehyde (4-CBA), is hydrogenated (typically over a palladium-on-charcoal fixed bed catalyst) to para-toluic acid, which is more soluble in water and thus readily separated from Terephthalic acid.  Crude Terephthalic acid is fed to a slurry vessel where it is contacted with hot water, heated, and fed to the reactor.  The aqueous solution of CTA containing impurities is contacted with hydrogen in the hydrogenation reactor. The reactor effluent is sent to a series of crystallizers.  PTA recovery is typically done in two steps: high pressure centrifuging followed by atmospheric centrifuging or vacuum filtration.   The mother liquor, which contains the impurities, can be processed to recover Terephthalic acid and intermediates prior to being sent to disposal. After a wash with hot water (re-slurry stage between the two recovery steps), the wet crystals are dried and the final fiber grade PTA is conveyed to storage.

Given the corrosive media and high temperatures used, expensive construction materials, mainly titanium and some Hastelloy C, are used in those parts of the plant exposed to the acetic acid and halide solutions.  The remainder is largely 316 or 304 stainless steels.

As shown in Table, the cost of Paraxylene is by far the most important determinant of PTA production costs, making up 85 percent of total cost.  The next two most important cash cost contributors are the utilities and acetic acid make-up. But these two items contribute only 4 percent and 3 percent of total costs, respectively. Owing to this extreme importance of Paraxylene cost to the economics of PTA production, most of the worlds top PTA producers are back integrated into Paraxylene. The plant has a capacity of 750 thousand metric tons per year (1,654 million pounds per year) as a single-line plant. The cost of production estimate represent U.S. Gulf Coast green-field construction and costs are for 2006, Q2.

The PTA market is been grown due to expansion of the PET industry and as substitution of DMT. PTA is in solid form and its transportation is more expensive than Paraxylene, hence production of PTA favors for close consumers only. In Asia there are establishment of very large production houses also e.g. CAPCO, Reliance, Pakistan PTA Ltd, etc A profit margin in PTA is healthy and stable compare to Paraxylene, hence its preferable to go for forward integration, despite of logistic disadvantage. In past PTA production technology was not readily available in market through license, but now situation is been changed and technology is readily available from several sources.

BP holds a major global market share, mainly under fully owned plants and with joint ventures at different locations in Asia. Many new plants are under development in China by fresh entrants in the market. In Asian PTA market price is following high volatile trend than in N America and W Europe. As more number of large scale plants are in Asian region PTA pricing in W European and N American market is highly influenced by the price of Paraxylene and Asian PTA price.

BP and Reliance Industries have a greater degree of PX/PTA integration than most other producers.  Other major Paraxylene producers are not involved in PTA, and instead supply the numerous other non-integrated PTA producers and PTA/PET producers such as Voridian and Advansa.

PTA is the one of the major feedstock material for producing PET (polyester) resin and fibers. Other PTA applications are there in hot-melt adhesives, coatings and composite materials and based on unsaturated polyester resins. PTA Demand growth is been driven directly with demand to the PET melt phase, but PTA demand growth is slightly lower than PET demand growth in actually, due to the escalating usage of recycled PET. Growth rates of PTA productions are highest in Central Europe, Eastern Europe and Africa. Now a days due to step-changes in demand the PTA based PET facilities are commissioned only.  Majority demand is from Asia Pacifics, hold stacks of 75% of the global total, reflecting the regions dominant share of the global PET fiber market. By the 2020, growth in Asia Pacific will account for more than 50% of the global total of PTA consumption, although the growth rate will be lower than in most other regions, due to the bias towards the slower growing fibers sector.

Capacity development is highly depends on the new Chinese plants, where capacity is expanding to feed the rapid growth of PET production and to reduce of supply chain.  Other countries such as Taiwan and South Korea, which have already a large capacity excess for export, will invest most slowly where other regions are developing capacity in line with demand for PET bottle grade production.

Generally Fiber-grade TPA is recovered by crystallization process made by BP. In this process yield is 95% of theoretical. Another process was developed by Invista, Dow Inca, Mitsubishi Chemical, Interquisa and Mitsui. In all the technologies developed by other than BP do not have product purity as same as BP process.

KoSa manufactures Terephthalic acid by hydrolyzing DMT manufactured by the Witten process. Several processes have been developed to produce TPA from toluene, but the processes are very complex and it is unlikely that any will be commercialized.

As per the current global scenario 60% of world capacity is in account of top 10 PTA producers. As shown in the graph below with their respective capacity. The first two producers BP Group and Samsung together control more than 20% of global ethylene capacity. As per the global mechanism of demand/supply for Paraxylene and PTA, Asian region is expected to keep expanding. Demand of PTA is increasing at approx 3.1% per year, from its current level of 262 million ton. Demand from Asian region is roughly at 70% compare to global consumption.

Confirmed expansions of Paraxylene plants are expected to increasing demand PTA. Given that capacity utilization rates are expected to equal their effective capacity of 92% by 2006. By the year 2010 Import of PTA raw material (PX) will rise to 3.3 million ton and majority imports will go to China.

The Current Global Scenario and View of PX-PTA Manufacturer

While speaking to company officials of major Paraxylene producer of Thailand PTTAR said they are going to expand their capacity in near future. To compete with high price of Crude Oil Company is to invest in higher value products, For PTTAR, synergy with Refinery will be able to increase our competition and reduce production cost by product exchange from Refinery and Aromatics complex. Construction of Aromatics Complex II is expected to be completed by August 2008.

Another major producer of PTA in Asian region expressed their view as they are well aware of increasing demand of PTA but some how they are not expanding their production capacity due to strategically decision and due to stagnant domestic market.

While speaking to another major producer of PX and PTA said they are also aware of growing demand in the market and to they are coming up with two new facility of production, each PX and PTA for one. This company is also planning to cut down its cost with higher value products/technology.

BP does not produce polyester fiber at all; it sells PTA feedstock to the companies that manufacturer Polyester. BP has all the proprietary technology and processes for high quality PTA production at minimum cost. Global PTA capacity is approx 43 million ton by the end of the last year. It was forecasted that demand for polyester will increase at 6.5% per year for next 5 year.

While Polyester demand development group of the company is aimed to create new and better market for polyester so that BP can provide better PX and PTA, as BP dont make PET but made enablers that can expand the properties so that PET could made more useful for other applications.

Feedstock shortage is expected to prompt further due to more Paraxylene capacity investments and as per current scenario Middle East Asia and China would win the race. For that they have to face the challenges like insufficient Naphtha or expansion of PX facilities by their competitors.