Bluer than blue: the revival of Philippine indigo

Philippine indigo (Indigofera tinctoria) is one of the oldest dyes in civilization and one of the most widely used natural dyes in the whole world due to its excellent colorfastness properties. In the Philippines, indigo was once extensively used in the weaving industry including the abel of llocos and the Abrenian fabrics.

The Philippine indigo has been part of the Galleon and Chinese trade in northern Philippines, centuries ago; however, the successful production of cheaper synthetic indigo eased it out of the market and caused its rapid decline not only in the Philippines but also all over the world. 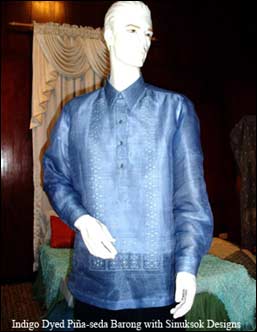 In the Philippines, the former First Lady Amelia "Ming" Ramos initiated the effort to revive indigo dyeing. She became the Patroness of natural dyes and spearheaded the Katutubong Kulay Project of the Katutubong Filipino Foundation in the early 1990's. The transfer and commercialization of the Philippine Textile Research Institute (PTRI) developed technology on indigo in Abra revived and upgraded the age long tradition of using tayum, the local name of indigo in Abra. In fact, a town in Abra was aptly named Tayum, reportedly because of the abundance of naturally growing indigo in the place. Tayum is where Abra's Natural Dye Center is located.

Among the PTRI technologies on natural dyes, indigo is most commonly requested for dyeing services and prototyping by interested clients. Indigo in textile silkscreen printing has likewise broadened the horizon for the developed indigo powder. The versatility of indigo as a dye and as a pigment for printing provides the impetus for the continued advocacy in popularizing Philippine indigo in both local and international textile scene.

Indigo is among the four priority natural dye sources included in the Philippine Council for Agriculture, Forestry and Natural Resources Research and Development (PCAARD) assisted project of the Aklan State University (ASU). An area which is in the school campus yields sufficient fresh indigo plant, which can beused as a crude liquid dye. Its powder form counterpart, however, yields even deeper and darker shades. PTRI is continuously undertaking process improvement in the production of indigo powder not only for dyeing but also for textile printing. This project also enables PTRI to help identify cultural management practices suitable for indigo growing through the assessment of the indigo ppowder and the evaluation of the dyed materials.

In addition to the Natural Dye Common Service Facility in ASU, Soumak Collection which is currently operating PTRl's Natural Dye Center in a Technology Business Incubation (TBI) arrangement is another recipient of the Institute's indigo technologies. The growing demand of Soumak Collection for indigo prompted ASU to seriously consider planting an initial one-hectare area inside ASU's Banga Campus. To date, seedlings have already germinated and will be ready for transplanting very soon. With this business arrangement being made between the two, the commercial revival of indigo dyeing is bound to stir the market.

Fil-Am Fashion designer Anthony Cruz Legarda and his Arkiteknik Collection has also included blue in his Fall 2008 Collection. It will feature the splendor of Philippine fabrics like pina-seda and pina in one 01 the fashion capitals of the world-New York, with Philippine indigo and other natural dyes, in collaboration with PTRI. The blue from indigo has high colorfastness ratings on pina, pina-silk, abaca, Philippine silk, cotton to name a few. Later, conquering Europe is inevitable since the quality of Philippine indigo is at par with, if not even better than the indigo from Japan, Korea, and India among many countries with local indigo traditions.

Research on Natural Dyes at PTRI

The PTRI's relentless R&D efforts in reviving natural dyes in a more scientific approach stirred the interest of the local hand-weavers, high end enterprises and fashion designers which opened doors, showcasing and revealing the majestic and wide ranges of blue color from Philippine indigo and rightfully become the crowning glory of Philippine natural dyes hoping it would catalyze the emergence and spectral rise of the natural dye industry in the Philippines.

According to Leano, PTRI initially developed basic colors such as muted red, blue, yellow, orange, green, violet, brown, and black. "But lately, designers were requesting new colors such as corral orange, bloody red, and others"

"It is really amusing because artists and technologists have different perspectives and appreciation of color. When designers request for a specific color, we really have to sit down together because we textile technologists have a different idea from what they are thinking of. Further, we have to consider a lot of factors in the preparation," he chuckles. He admits that currently, PTRI responds to a demand-driven clientele from the textile, garments, and fashion industry who are closely in touch with color trends.

But Leaňo acknowledges that naturally dyed products cost about thrice compared with synthetic counter parts. So why would PTRI embark on this kind of project?

Apparently, natural dyes are far more ecologically friendly than synthetic ones. According to Leaňo chemical dyes have been banned in Europe because these are found to be toxic or carcinogenic. Synthetic dyes, when produced in an industrial scale, cause serious environmental pollution.

''The Abra facility for some reasons became non-operational. But now we are trying to reestablish it to meet the growing market demands. We have a plantation in Tayum, Abra that could supply materials for dye production," says Leaňo. He also said that thE: facility was envisioned to provide livelihood to Tingguian beneficiaries, in addition to providing a standardized and more cost effective dyeing technology.

Meanwhile, the three-year old Aklan CSF was established in collaboration with Aklan State University (ASU) and with funding assistance from DOST's Technology Incubation and Commercialization Program (TECHNICOM). DOST's Philippine Council for Agriculture, Forestry and Natural Resources Research and Development supervises the project and gives assistance in the establishment of nursery and plantation undertaken by ASU.

Backward integration through a nursery and small-scale plantation ensures the sustainability of raw materials supply for the CSF's four natural dye sources such as sappan, indigo, achuete, and yellow ginger, Leano explained.

PTRI and the Rural Development Administration (RDA) of Korea, through the Philippine RDA Alumni Association, are collaborating in a three-year project called Technology Demonstration Farm of Korean Natural Dyes Technology to improve the capabilities of the Aklan CSF. The project aims to establish a small scale demonstration plantation of selected dye sources; improve manpower and natural dyeing facilities; and adopt, transfer and verify Korean natural dye technologies for local use.

Natural dyes are expected to splash premium value to the country's export quality fiber-based products and handicrafts intended for the "go natural" market. "We are now into hand painting and silk screen using our very own developed natural dye powders," Leallo disclosed.