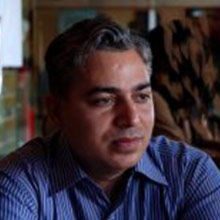 The verb singe literally means to burn superficially. Technically, singeing refers to the burning-off of:

Textiles materials are most commonly singed in woven or knitted fabric form or in yarn form.

There are three main types of singeing machines:

The Author is thankful to all singeing machinery manufacturers whose websites and technical literature have been consulted and whose figures have been used in this report.

Common problems in GAS singeing and their causes

B. Uneven Singeing Across the Fabric Width

The most common causes of widthways uneven singeing are as follows:

The most common causes of horizontal singeing stripes are as follows:

This may be caused by:

F. Over-singing or Thermal Damage of the Fabric

The most common causes of over-singeing or thermal damage of the fabric are as follows:

This may be cause by:

In this type of singeing machine, the cloth passes over and in contact with a heated rotary cylinder made of copper or cast iron. The rotary cylinder has internal firing and revolves slowly so that constantly a fresh surface of the roller comes in contact with the cloth. The direction of rotation of the cylinder is opposite to the direction of the fabric so that the protruding fibres or nap of the fabric is raised.

This type of machine is particularly suitable for the singeing of velvets and other pile fabrics.

If the singeing of both sides of the fabric is required, then two cylinder are employed, one for each side of the fabric.

In this type of singeing machine, the fabric passes over a burning gas flame at such a speed that only the protruding fibres burn and the main body of the fabric is not damaged by the flame. This is the most common type of machine used for singeing fabrics as well yarns (Fig.3).

The main purpose of singeing is to burn the protruding fibres from the yarn and/or fabric surface. In order to burn the protruding fibres, energy must be supplied. The supplied energy must be just enough to burn only the protruding fibres, while keeping the firmly bound fibres in tact. This is achieved by allowing time of contact between the singeing flame and the fabric to practically a fraction of a second. As the temperature of the flame is too high (around 1300C), any regulation of this temperature is out of the question. However, metering and control of thermal energy of the flame is essential for the safe but effective burning off process.

Burning Behaviour of Cotton and Polyester

Cotton has an exothermic pyrolysis as once it has been ignited it continues to burn by virtue of its own energy which is being released. Polyester has an endothermic pyrolysis as it requires a steady supply of energy to allow the burning process to continue. Polyester ignites at a temperature of 480-500 C, while it starts melting at 250-260 C.

For the singeing of polyester fabric or yarns, thermal energy must be supplied in a shock form, and the pyrolysis must be like an explosion, so that the polyester protruding fibres ignite rather than melting. Otherwise, molten beads of polyester may be formed.

Fig. 4 illustrates main components of a gas singeing machine. The dotted line, in the fig., represents the movement of fabric from the left to the right.

At the start, the fabric passes through a tension unit with guide rollers and bars, which ensure crease-free entry of the fabric into the machine. Then, there are (optional) pre-drying cylinders which even out any variations in the fabric moisture-content and temperature.

Next, the fabric passes through pre-brushing unit which, in addition to removing dirt/dust, lint and loose fibres from the fabric, causes the fibres sticking to the fabric surface to stand out for easy subsequent burning. A dust collection system, provided just below the brush rollers, is connected to a powerful suction unit.

After pre-brushing, the fabric enters into the singeing chamber, where it passes over the burning flames, which are positioned on both sides of the fabric. The cloth can be threaded so as to allow singeing of either one or both sides of the fabric. Burner body is specially designed to provide gas flow at uniform pressure/velocity throughout the fabric width. Burner is termed as the heart of singeing and should generate homogenous, stable, uniform and highly concentrated flame rich in energy by ideal combustion of the gas:air mixture. Good singeing machines offer adjustable flame intensity, flame width and distance between the flame and the fabric.

Gas outlet section of the burner is provided with water jacket to keep the burner cool. Adjustable water-cooled rollers are used to obtain different fabric/flame positions, which permit desired degree of singeing effect on different quality of fabrics by adjusting the guide roller position with respect to the flame. A Carburettor or air/gas mixer allows automatic mixing of gas with air to control the intensity of the singeing flame.

After passing over the flames, the fabric passes through (optional) steam quenching unit to put off any sparks and/or through post-brushing section for clean-up/removal of burnt fibres. The after-brushing keeps the subsequent impregnation-liquor cleaner and reduces the amount of dust entering in the following process steps. Then, the fabric passes though a saturator, which contains the desizing agent along with the auxiliary chemicals. After saturation with the desizing liquor, the fabric is squeezed by squeezing mangles and is wound on a batcher.

Singeing machines from some leading suppliers are depicted in Fig. 6-9. 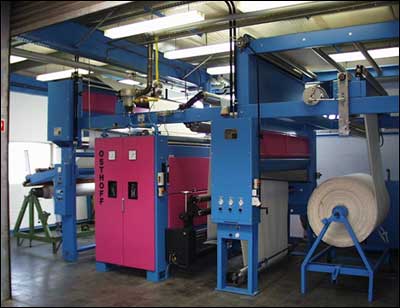 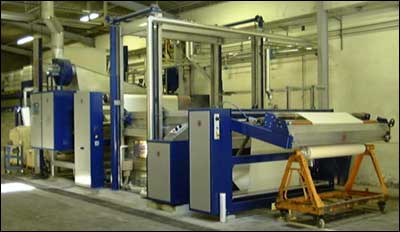 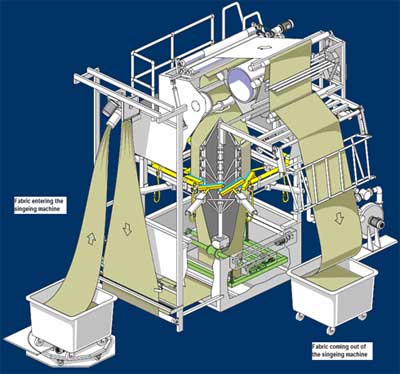 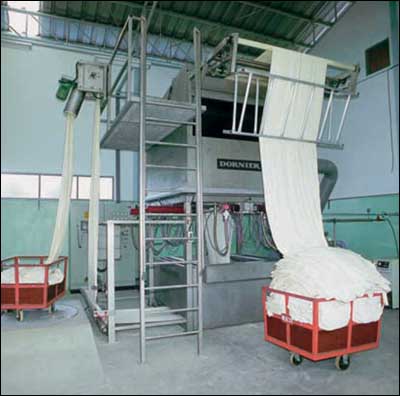 Together with the supply and control units for gas-air mixture, burners comprise the most important part of any singeing machine. The flame intensity of the singeing burners is based on the amount and the outlet speed of the gas-air mixture leaving the burner slots. Besides having high thermal energy, flame also has considerable mechanical energy. All the thermal and mechanical energy of the flame is directed onto the fabric during singeing. The temperature of the flame at the mouth of the burner is in the range of 1250 to 1300C. The speed of the flame at the burner outlet may be between 15 and 35 meter per second. The flame intensity usually lies between 5 and 20 mbars.

The fabric speed in the singeing machine is usually in the range of 50-160 m/min depending on fabric (gram per square meter) weight and fibre blend. For heavier fabrics, the speed is kept slower as compared to lighter weight fabrics.

This is the most intensive singeing position with highest efficiency. In this position, the flame bounces onto the free-guided fabric at right angles. This position is usually recommended for singeing of fabrics with all natural fibres (e.g. cotton), regenerated fibres and blended fabrics, which have been tightly woven and have weights over 125 g/m2. (See Fig. 10).

In this position, the singeing flame falls on the fabric tangentially. The flame touches only the protruding fibres without having any significant contact with the main fabric body. This position is usually recommended for very light weight and sensitive fabrics as well as fabrics with broken filaments. (See Fig. 12).

As the energy content of the flame is lower the farther it is from the burner, the singeing efficiency is consequently decreased by increasing the burner-fabric distance. The distance between the burner and the fabric is usually in the range of 6-8mm but it can be adjusted in a range from 6-20mm.

All good singeing machines come with a provision of flame width adjustment according to the width of the fabric. This is essential to optimize the gas economy.

Hairiness Tester provides another possibility to control the singeing effect objectively. The fabric surface is monitored by means of a laser beam and the hairiness of the fabric is displayed on a computer screen. The measured information can be used as a set value for the control of the singer in order to achieve the programmed effect.

The effectiveness of singeing process can be checked by one or more of the following: