Modern society expects bio-auxiliary to be the answer for many worldwide problems like depletion of energy sources, incurable illnesses and pollution, among other problems. Industrial use of biotechnology, known as white biotechnology, is bringing about new products and processes aimed at the use of renewable resources, as well as the application of green technologies with low energy consumption and environmentally healthy practices.

Textile processing is a growing industry that traditionally has used a lot of water, energy and harsh chemicals-starting from pesticides for cotton-growing to high amounts of wash waters that result in waste streams causing high environmental burdens.

As textile fibers are polymers, the majority being of natural origin, it is reasonable to expect there would be a lot of opportunities for the application of bio-auxiliary to textile processing.

Enzymes - nature's catalysts and bio-auxiliaries - are the logical tools for development of new biotechnology-based solutions for textile wet processing.

What Indian dyestuff and Textile auxiliary manufacturer need to do?

Use of Sugar polymers:

The present invention relates to water-soluble, acid-groups-containing graft copolymers which are at least partially biodegradable and are based on sugars and monoethylenically unsaturated carboxylic and sulfonic acids as well as optional further monomers.

This inhibits the negative effects of the water hardness and high fe3+-dispersing capacity, the dispersive action on pigments, the use in washing liquors and dye baths, as well as the use as auxiliary agents in the manufacture of paper and leather.

In these applications of the water-soluble polymers it is important that multivalent metal ions are complexed, hardness elements of the-water are prevented from precipitating or that pigments are dispersed in a high concentration at a low viscosity.

Pretreatment of cotton with a multifunctional sugar-co-polymer and a special wetting/washing agent in acid medium.

The use of the polymers according to the present invention is described with reference to a discontinuous washing of a cotton fabric which had been subjected to reactive dyeing.

At first, the dyeing liquor is drained off followed by:

The cotton fabric has an intensive color, shows no bleeding and exhibits good wash fastness.

The above-mentioned periods of time, temperatures and sequences are intended to be illustrative. The polymers according to the present invention can also be used under other washing conditions.

The findings of the various Research Institutes of Europe who were engaged in the field of Textile research, that some of these dyes are potentially carcinogenic.

This high molecular weight linear polyester has good thermoplastic properties (melting point 180C) and can be melt spun into fibres. Biocompatibility and biodegradability makes PHB fibres ideally suited for surgical use; sutures made from PHB are slowly degraded by the body's enzymes. Zeneca is currently using Biopol in conventional plastics applications such as shampoo bottles.

The price of the polymer is still considered too high for many fibre applications and ultimately Biopol might be produced by plants. Zeneca seeds are experimenting with a genetically engineered variety of grape which can synthesise Biopol.

Other biopolymers currently of particular interest in wound-healing applications include the polysaccharides chitin, alginate, dextran and hyaluronic acid. Chitin and its derivative chitosan are important components of fungal cell walls although these polymers are, at present manufactured from sea food (shellfish) wastes. Patents taken out by the Japanese company Unitika cite the use of fibres made out of chitin in wound dressings.

At BTTG, research has been directed towards the use of intact fungal filaments as a direct source of chitin or chitosan fibre to produce inexpensive wound dressings and other novel materials.

Wound dressings based on calcium alginate fibres have already been developed by Courtaulds and are marketed under the trade name 'Sorbsan'. Present supplies of this polysaccharide rely on its extraction from brown seaweed's. However, a polymer of similar structure can also be produced by fermentation from certain species of bacteria.

Dextran, which is manufactured by the fermentation of sucrose by Leuconostoc mesenteroides or related species of bacteria, is also being developed as a fibrous non-woven for speciality end-uses such as wound dressings.

Bio-auxiliary in dyes and pigments

Manufacturing of natural dyes from different wood berk, leaves, fruits, tea extraction becomes a novel approach towards the use of biomaterial in dyeing. Textile auxiliaries such as dyes could be produced by fermentation or from plants in the future (note: before the invention of synthetic dyes in the nineteenth century many of the colours used to dye textiles came from plants. e.g. woad, indigo and madder).

Many micro-organisms produce pigments during their growth which are substantive as indicated by the permanent staining that is often associated with mildew growth on textiles and plastics. It is not unusual for some species to produce up to 30% of their dry weight as pigment.

Several of these microbial pigments have been shown to be benzoquinone, naphthoquinone, anthraquinone, perinaphthenone and benzofluoranthenequinone derivatives, resembling in some instances the important group of vat dyes.

The production and evaluation of microbial pigments as textile colorants is currently being investigated at BTTG.

Biotechnology can be used in new production processes that are themselves less polluting than the traditional processes and microbes or their enzymes are already being used to degrade toxic wastes. Waste treatment is probably the biggest industrial application of biotechnology. Specific problems pertaining to the textile industry include colour removal from dyehouse effluent, toxic heavy metal compounds and pentachlorophenol used overseas as a rot-proofing treatment of cotton fabrics but washed out during subsequent processing.

Currently much research is being carried out to resolve these problems and biotechnology would appear to offer the most effective solutions. Biological treatment of effluent is termed as secondary treatment. The objective of treatment is to achieve bio-flocculation.

The micro-organisms convert the colloidal and dissolved carbonaceous matter into various gases and cell tissues. The cell tissues have a specific gravity slightly higher than that of water and hence can be removed by gravity settling. Bacterium 'shewanella sp' can couple growth to the biodegradation of reactive azo dyes.

It is thought that colour removal process involves transfer of electrons from the cell to the dye molecule, via a dye reductase, this results in reduction of the chromophore i.e., the azo bonds, to produce a significantly less coloured solution that contains amines.

Lignin peroxidase, manganese peroxidase and Laccase are produced by white rot fungi and are believed to involve in degradation of lignin and wide variety of recalcitrant xenobiotic compounds. Many rot fungi including pycnoporuscinnacarit, pleurotusostreatus, etc. have been found to be efficient in degrading dyes.

End use of bio-auxiliaries in textiles 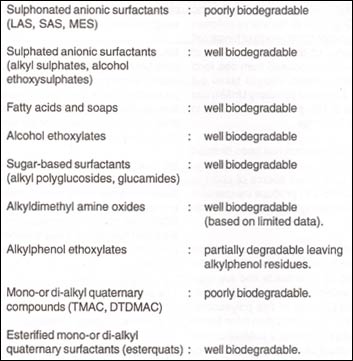 Major applications of bio-auxiliary in the textile industry:

Nonionic surfactants are less seriously affected by water hardness and are especially useful in products designed to require little rinsing.

However, neither is environmentally preferable.

Mr. Edward Menezes is the Director of Rossari Biotech, Mumbai.