A shopping mall in New Jersey displays T-shirts in a vibrant palette which looks trendy and is an up-to-date fashion. Far away in an African country, a young man happily strolls through a market wearing a T-shirt with an American logo printed on it. Though seemingly irrelevant, both panoramas are interconnected with each other through a line of clothing. How does clothing which is originally sold in the US end up in the clothing shelf of an African lad? Globalization and recycling of used clothing work together to make this possible. The journey of a garment does not end as a landfill all the time. They may be recycled in two ways; either it will be sold again as used clothing or will be shredded and mechanically recycled into raw material for the manufacture of other recycled apparel products.

A resale or used or second hand clothing encompasses the following:

After the trade liberalization in the 90s, there has been a remarkable increase in the demand for used clothes. Cities like London, and Philadelphia export used clothing in 50 kilogram bales through their wholesalers. Mostly used clothing is being exported from US, and to African countries like Cameroon, Ghana, and Benin. T-shirts, bins and trousers are sorted first, and then quality garments are taken to vintage stores for resale. The bales are transported for a long distance to be sold to the local vendors. Majority of the people in many developing countries wear used clothes on a daily basis. Countries on the bottom of the economic scale like Zambia rely on imported second hand clothing. The wardrobes of many families in Zambia have only used clothing. A survey conducted in US states that approximately 15% of the discarded clothing is given for resale, and around 12-15% of the Americans shop for their clothing at the resale stores. 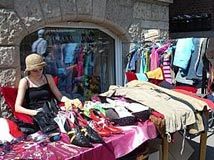 Used clothing is one of the most popular things sold in the flea markets. Childrens used clothing sell more and faster comparatively over adult clothing because kids grow up and clothing sizes change very quickly. Here also some basic selling skills are required like taking care of the quality and style, and not selling clothes that are completely out of fashion. A large quantity of clothing is usually sold through discount bins where people select the garments kept in a big bin.

The current era of internet boosts up the resale of clothing. Many people sell their old clothing directly to other individuals through sites like eBay. Consignment and thrift shops are also becoming increasingly popular, growing at a rate of 5% every year providing options for the sale of used clothing. These clothes are being utilized in many ways; efficiently. Some of them even undergo a fundamental treatment and are being transformed into completely a different clothing; altogether. Threads from a woolen sweater may be wound up into balls which are used for embroidering on costly materials while manufacturing womens slips. Tailors buy small pieces of clothes, sew them together, dye them and sell it in the market as bed linen. The US Government offers tax benefits to people who donate their clothing and household goods to institutions like Salvation Army.

The springing up of Fast Fashion also motivates the increase in the market for used clothing. The emergence of a new fad every single day makes the older trend go obsolete very quickly. People who dress to impress go in par with the current trend. These people discard their clothing even when they are still new. These clothes are sold in the used cloth markets or exported to other countries for the same purpose. Much of these are womens clothing, because women tend to buy more garments and discard them quickly as compared with men. The total garment supply of womens clothing is almost seven times more than of mens. Due to this, in the used clothing market mens clothing are available at a price four to five times costlier then that of womens clothing.

There has been a controversial discussion during the recent past that exporting used clothing to the developing countries must be banned. The reason people buy used clothing is due to their poverty wherein they cannot afford to buy new ones. These clothes have also developed a new industry in these countries and have generated employment opportunities for many people. In Europe approximately 1, 00,000 people, and 10,000 people in Germany are employed in the textile recycling jobs. Second hand clothing has a history, as old as manufacturing of clothes itself. A profitable market for used clothing is conspicuous both in the urban and village areas.