Carpet hand-weaving is an important industry in Iran. The repetitive trauma to hands in this occupation produces typical nodules and plaques. The skin lesions from 150 carpet weavers are reported. The characteristic carpet nodule is clinically and histologically described

Carpet hand-weaving is a common practice in countries such as Iran, China, Turkey, India, and Pakistan. In Iran, hand woven carpets are produced in home-based workshops categorized as informal small-scale industry. The work is often organized around families and done in homes [1].

Hand-woven carpets are the most important Iranian non-oil export and this industry has an outstanding place in the country's economy with a share of 1 percent in the GNP [2]. In Iran nearly 2.2 million full time and part time weavers are working [3] and about 8.5 million people directly or indirectly live on the hand-woven carpet industry [4]. 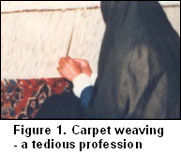 Carpet weaving is one of the most tedious professions, requiring long hours of static work (Fig. 1). It can be a high-risk occupation for developing musculoskeletal and nerve injury, such as carpel tunnel syndrome [5]. Radjabi reported that the repeated tying of knots with non-ergonomic hand tools can result in swollen finger joints, arthritis, and neuralgia, causing permanent deformity of the fingers [6]. Injuries of the soft tissue, wrists, and median nerve are common [7, 8, 9].

In this study one hundred and fifty weavers from twenty active weaving workshops in several rural and urban districts of Yazd province in the central area of Iran were surveyed and examined by a dermatologist. A questionnaire was developed to collect required data from each weaver. The questionnaire consisted of personal information, workshop conditions, and past medical history.

Table 1 shows the personal characteristics of carpet weavers. The majority of weavers were female (92%) and nearly half of them were girls under sixteen years old, working more than eight hours daily.

Table 2 shows the frequency of skin lesions in carpet weavers. The majority of skin lesions were on the hands. The most common lesion on weavers' hands was "carpet nodule," observed in nearly two-thirds of weavers.

Clinically the lesion consists of a broad, hyperkeratotic nodule or plaque over the fingers, especially on the dorsum of the third finger of the right hand. Mild scaling and occasionally fissuring may be seen. The lesions usually are 1-5 cm in length and 2-4 cm in width. They are asymptomatic except for mild pruritus and mild to moderate disfigurement (Figs. 2 & 3).

On X-ray examination, increased thickness of soft tissue was noted, but no abnormality of bone and joint was seen (Fig. 4).

No spongiosis, basal layer damage, inflammation, vasculitis, edema, neoplasia or other pathologic processes were present. In the thickened dermis, thickened collagen fibers in the reticular dermis and increased vascular lumens were noted. Epidermal appendages were normal; eccrine glands were abundant. 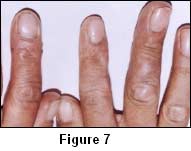 Other skin lesions seen in weavers are shown in Table 2. A lesion clinically similar to knuckle pads (Fig. 7), consisting of hyperkeratotic plaques over the dorsum of fingers (particularly over interphalangeal joints) was seen in 21 percent of weavers. Other skin lesions were scanty except for non-specific callosities, seen in 38 percent of weavers. Acne vulgaris, contact dermatitis, melasma and pityriasis versicolor were also common.

This study shows that skin problems were common among carpet hand-weavers. The most common skin lesions were hyperkeratotic nodules and plaques on the hands and fingers; we suggest the name, "carpet nodule." The lesion clinically resembles a callosity but is much larger and thicker and has little to moderate lichenification. Histological study does not show spongiosis, inter- or intra-cellular edema, or inflammatory cells, ruling out dermatitis.

Continuous trauma plays a major role in the formation of lesions. A similar entity, known as surfer's nodules have been reported on the anterior tibial prominence [10], dorsa of the feet, or knuckles of athletes [11]. Sports-related connective tissue nevi of the collagen type (collagenomas) have also been referred to as athlete's nodules. Surfers, boxers, marble-players, and football players are some of the athletes in whom these lesions have been observed. The nodules can be found on the dorsal aspect of the feet, knees, or knuckles and can be differentiated from other conditions by clinical history or microscopic features. Recurrent trauma and friction are the likely causative factors. Enhanced synthesis or accumulation of collagen may have a contributory role. These asymptomatic nodules show dermal fibrosis as well as epidermal hyperplasia, similar to our findings.

The repetitive movement of wrist and fingers required for carpet weaving and the use of non-ergonomic tools (knife, combs, scissors and others) can lead to injury. Certainly continuous trauma to hands and fingers during carpet-making have a major role in producing the papules and nodules we would like to call, "carpet nodules."