Bio-and Nanotechnology in the Processing of Silk

Being a minor regional fibre with a share of less than 1%, silk has not had the benefit of R&D effort as much as other fibers have. R&D in the field of chemical processing of silk is confined largely to China, Japan, Italy and India. Como in Italy being one of the major processing centres for the silk fabrics with a dedicated research association in Milan. Likewise China has Suzhou Institute of Silk Technology; Shinshu University in Japan was a major research centre at one time. In India we have CSTRI in Bangalore and some universities and institutes doing R&D work in chemical processing of silk.

In recent times there has been a renewed focus on environmentally friendly processes and chemicals. Standards such as Okotex 100, ISO 14,000 and GOTS have to be complied with to make the textile processors environmentally compliant. One must also comply with ISO 9,000 and SA 8,000 to be able to be acceptable in the International market. Moreover, it has become imperative for every industry to develop and adopt sustainable technologies in view of India signing Kyoto Protocol and committing to reduce its carbon dioxide emissions by 5.2 % during the first implementation period between 2008 and 2012. Sustainable technologies also require the use of renewable energy and raw materials to produce and process the products.

A large numbers of chemicals and dyes are used in the processing of textile fabrics and garments that require enormous energy for their application and remediation of the residual dyes and chemicals that end up in the effluent (Illustration I). Therefore the processed textile products have a heavy carbon footprint. The exporting countries increasingly want to know about the carbon footprints of the products that they source from India.

Advancement in the biotechnologies and their use in the processing of textiles has opened up new possibilities to enhance the sustainability credentials of textile industry since they are less energy intensive and generate bio-degradable effluent. This is true for silk processing where nano and biotechnology is beginning to find its application.

The major chemical processes that are carried out on raw silk yarn and fabrics are degumming, dyeing, printing and finishing.

The silk filament spun by the silkworm (Bombyx mori) is composed of two fibroin filaments held together by a cementing layer of sericin. Fibroin and sericin account for about 75 wt% and 25 wt% of the raw silk, respectively. The degumming process consists in removing the sericin layer prior to dyeing or printing and finishing to get bright lustrous fabrics and garment. The degumming of silk has conventionally been carried out under alkaline conditions at a pH of 10 to 11 near boil. In recent years two new processes have emerged. They are the "H.T.-H.P. Degumming" and "Enzyme Degumming". High temperature high pressure degumming requires special pressured equipment and is energy-intensive process.

Enzymatic degumming is emerging as an eco-friendly fibre-gentle process where proteolytic enzymes that are effective under alkaline, neutral as well as acidic conditions are being used. With the local availability of the enzymes at a reasonable price this process has a commercial potential in India. Being large molecules, enzymes do not penetrate into the interstices of the fabric and hence are suitable for yarn degumming only. A critical control of the pH and temperature is required to realize the full potential of the enzymes requiring use of sophisticated machinery such as the Mezzera yarn-dyeing machine (Illustration II). Since most of the enzymes are effective at a comparatively low temperature of about 600C, they are less energy-intensive. 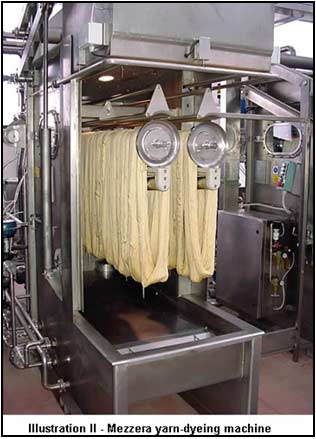 The degumming waste liquor that is rich in sericin content is being used as a raw material for the production of sericin powder. The sericin powder is being used in the cosmetic industry as moisturizer, in hair-care products and also as a sustainable natural textile finish (Illustration III). Removal of sericin from the waste degumming liquor also substantially reduces the effluent.

Silk is generally dyed with acid and metal complex dyes. Since a large number of acid dyes are based on alpha amino benzene derivatives, they have been considered as potential carcinogens and have been progressively banned by countries across the world including India.

Restrictions on the use of a large number of synthetic acid dyes has given impetus to the use of natural plant material extracts for the coloration of silk. Some of the natural dye extracts are now available in reasonably purified and standardized user-friendly powder form (Illustration IV). Even though the colour gamut of these dyes is limited, however, enough reasonably fast colours are available that can be dyed and printed on silk (Illustration V). Many researches are exploring the possibilities of use of natural plant material and extracts for their use in the dye and printing of silk (See Box I for indicative list). 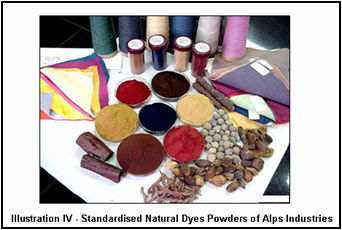 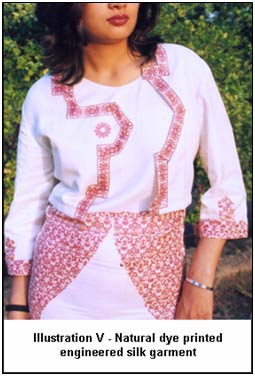 Possibilities of use of microbial dyes are also being explored. For instance a red dye with good fastness to light, washing and rubbing suitable for the dyeing of silk has been isolated from mangrove soil. In an another study it has been established that a strain of Vibrio sp. isolated from marine sediments produced large quantities of bright red pigments that could be used to dye many fibers including silk. Besides these studies, dyes obtained from cultured Euphorbia milli cells have also been produced.

The natural dye extracts being sold are crude water extracts with substantial impurities such as soluble gums, carbohydrates and proteins. Therefore these dyes can not be used for the dyeing of yarn in cone dyeing machines. There is need to produce dyes that have been purified by enzyme remediation and membrane filtrations so as to further standardize them and enlarge their colour gamut.

The natural dye extracts being sold are crude water extracts with substantial impurities such as soluble gums, carbohydrates and proteins which restricts them form their use in the dyeing of yarn in cone dyeing machines. Therefore, there is a need to produce dyes that have been purified by enzyme remediation and membrane filtrations so as to make them suitable for dyeing of yarn in package dyeing machines and enlarge their colour gamut.

Silk is valued for its sheen, lustre and feel. Any mechanical or chemical finishing process that enhances these qualities of silk is adopted. However, some finishes have been developed to give new look to the products such as the stone-wash, crumpled look or the peach finish etc. Besides these finishes R&D is being carried out to impart additional functional properties to silk fabric that caters to the well-being of the users, such as negative-ion generating finishes, dead cell rejuvenating, antimicrobial and UV protecting finishes.

Nano-Finishes Based on Natural Ion Generating Minerals having Healing Properties

Recently textile finishes based on negative ion generating pyroelectric minerals such as Tourmaline (Illustration VI) have been developed by embedding the nanoparticles of tourmaline in a polymer emulsion. 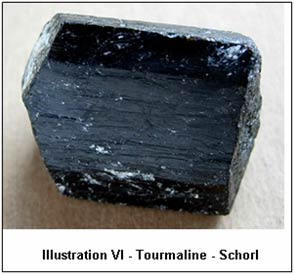 The finish is applied by the pad-dry-cute method. Tourmaline particles emit negative ion and near IR radiation on heating or rubbing. These ions combine with airborne water molecules and stabilize in air. Therapeutic effects, such as stress reduction, recovery from fatigue and mental and/or physical relaxation, are expected if negative ions are taken into the body by breathing or through the skin.

Tourmalines are naturally occurring minerals (found in Rajasthan in India) with the general formula XY3Z6 (B03)3Si6018 (O, OH, F) 4 where usually X = Na, Ca, or a vacancy, Y = AI, Li, Fe2+, FeH, and many other cations, and Z = AI, Mg, and FeH. It has been known for centuries that tourmaline crystals are pyroelectric materials that develop an electrostatic charge when heated or cooled. When tourmaline crystals are heated, a positive charge develops at one and a negative charge at the other. These charges reverse themselves when the crystal cools. This is referred to as a pyroelectric property. A piezoelectric charge can be developed if pressure is applied to the ends of the crystal.

Finishes Based on Natural Bio-molecules such as Chitosan and Sericin

Chitosan and sericin are natural polymers (of value) available as by-products. Chitosan is a non-toxic biodegradable polycationic polymer with low immunogenicity. Because of the amino groups, chitosan carries cationic charge under acidic conditions, which give it the ability to lower plasma triglycerides and antimicrobial activity. Chitosan is produced commercially by deacetylation of chitin, which is the structural element in the exoskeleton of crustaceans (such as crabs, shrimp, etc.). It is a by-product of the shrimp and crab production industry. Low molecular weight chitosan (produced by enzymatic hydrolysis) that is soluble in water is a useful textile finish that modifies the handle and also acts as a natural antimicrobial agent.

Sericin generated as by-product of the degumming process of silk goes into effluent. It has been reported that sericin has high moisture absorbing, antimicrobial and UV [protection properties. Suitably tailored sericin is used as a textile finish to improve moisture, UV absorption and antimicrobial properties of treated fabrics.

The polymers can act as handle modifiers with added properties as antimicrobial, UV protection and cell rejuvenation.

Another natural product nano-silver is also finding considerable use in treatment of textile products such as socks etc to make them less smelling and requiring less frequent washing there by make them more sustainable. A combination of nano-silver and chitosan or sericin will make it an effective value added multifunctional finish. Such finishes need to be developed and evaluated.

Finishes based on Aloe Vera and Neem extracts

Aloe Vera (Aloe barbadensis, Miller), belongs to the family Liliaceae, has been used in traditional medicinal practices as well as cosmetic uses. Aloe Vera has excellent skin care properties which includes anti-inflammatory and anti-aging. Application of Aloe Vera on textiles as an anti-ageing and moisturizing agent has been patented by Kimberley-Clark Inc. Ltd. DyStar Auxiliaries GmbH has developed a textile finishing product containing a combination of vitamin E, Aloe Vera and jojoba oil in a silicon matrix for moisturizing and UV protection effect. This finish can also be applied on silk fabrics.

Neem (Azadirachta indica), belongs to the plant family Meliaceae (Mahogany). Neem oil has been applied on the textile material using micro encapsulation technique. An aqueous formulation based on Neem oil has been patented by Bayer AG, for textile and related products. The textile material treated with neem oil show very good antibacterial and moth repellent properties.

This brief write-up gives a glimpse of a plethora of bio and nanotechnologies that are being investigated and applied on silk to give a sustainable product with very low carbon foot print. However, there is a need to further explore and test some of these evolving technologies at the pilot level and develop a comprehensive package of bio and nanotechnologies for the processing of silk that can be implemented in a silk process house. This will not only add value to silk fabrics but shall also make the silk industry more competitive and sustainable.

The author is associated with the Department of Textile Technology, Indian Institute of Technology, Delhi, Hauz Khas, New Delhi.