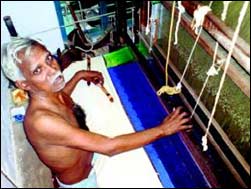 The global slow down is having a positive effect, at least on one industry in the heart of South India. This is one town where all businesses say: we are hiring. Welcome to the much-vaunted silk cluster in Kancheepuram, which has witnessed a huge exodus of its weavers, lured away with better salaries by multinational companies such as Hyundai, Nokia and Saint-Gobain that have factories in the Sriperumbudur belt near Chennai.

The situation is reversing fast, bringing hope back in the industry. The economic slowdown and a lull in the manufacturing sector would help wean away the weaver community, silk industry officials say. The other factor that would stoke the reverse exodus is an increase in wages, both from the cooperative societies and private players.

"We have hiked wages by around 50%", says MS Manoharan, whose company SM Silks is one of the biggest players in the cluster with annual sales of Rs.40 crore. He sees workers returning by the first half of 2009 as the wage hike comes into effect. Manoharan points out that apart from the money young people left for better matrimonial prospects as well. Now, with better wages, that too would be addressed to an extent. "I can sense it happening already," says Gnanamoorthy, Director, SM Silks. He has been trying to figure out the number of workers who are back. The reason is simple. His company recently had to turn down an order worth Rs.1 crore because of the paucity in manpower.

Manoharan adds that this time there is another impetus for the weavers as well. "We are ready to share profits with them. When they would get higher wages and will be able to live with their families, they would return adding that some already have, but this trickle needs to be a downpour to erase the shortage of workers." Industry officials say there are 20,000 weavers in the cluster and at least 500-600 are leaving for the factories every year. "That outflow is much lesser this year," says Mr M Palanisamy, Managing Director, Tamil Nadu Zari. He feels that while the workers are coming back, the numbers are not yet available as the trend has just started.

Nalli Kuppusamy Chetty, who founded Nalli and sells over Rs.400 crore worth of saris every year, says they should start coming back now in droves. In terms of wages, weaving earlier fetched Rs.6, 000 a month but the factories give them Rs.7, 500 starting salary. Now that the wages are hiked, the difference in wages is almost zero. "Had the departure of the workers continued this way, we might have faced a shortage in production," he says. Clearly, that seems to have gone down the horizon.

A Silk Board official says that while there is a shortage even if some big order comes their way that might soon change. "Some workers might return by next year," he says. This, combined with the expected continuation of the antidumping duty from next year, would bring back some spark in the sector.

Ms MP Nirmala, who heads TN's textile promotion body Co-optex, says the increase in wages would bring them back. "The demand for silk is there and we are waiting for them to come back. Some more encouragement would expedite their arrival", she says.

By: The Economic Times
Published : Dec 2008
Reuse this Content