Learn About Your Lingerie

Today women who want both comfortable and exclusive lingerie don't find their size and good fitting. The different distribution channels propose only standardized lingerie and none tailor made. Women want to be sure about the right sizes, and perfect fittings. This article talks about the various aspects of Fabrics used for lingerie and different shapes of lingerie to gracefully present the women's body. 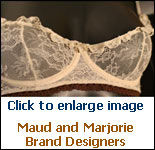 Lace is a lightweight, openwork fabric, patterned with open holes in the work, made by machine or by hand. Lace-making is an ancient craft. True lace was not made until the late 15th and early 16th centuries. A true lace is created when a thread is looped, twisted or braided to other threads independently from a backing fabric.

Originally linen, silk, gold, or silver threads were used. Now lace is often made with cotton thread. Manufactured lace may be made of synthetic fiber. A few modern artists make lace with a fine copper or silver wire instead of thread.

There are many types of lace, defined by how they are made. These include:

Muslin is most typically a closely-woven unbleached or white cloth, produced from corded cotton yarn. Wide muslin is called "sheeting". It is often used to make dresses or curtains but may also be used to complement foam for bench padding. Muslin breathes well, and is a good choice of material for clothing meant for hot, dry climates.

Silk is a natural protein fiber, some forms of which can be woven into textiles. The best known type of silk is obtained from cocoons made by the larvae of the silkworm Bombyx mori reared in captivity (sericulture). The shimmering appearance for which silk is prized comes from the fibers' triangular prism-like structure which allows silk cloth to refract incoming light at different angles.

Cotton is a soft fibre that grows around the seeds of the cotton plant (Gossypium sp.), a shrub native to tropical and subtropical regions around the world, including the Americas, India, and Africa. However, virtually all of the commercial cotton grown today worldwide is grown from varieties of the native American species Gossypium hirsutum and Gossypium barbadense. The fiber is most often spun into yarn or thread and used to make a soft, breathable textile, which is the most widely used natural-fiber cloth in clothing today.

Micro fiber is fiber with strands less than one denier. Micro fiber is the perfect blend of polyester and polyamide. Fabrics made with micro fibers are exceptionally soft and hold their shape well. When high quality Micro fiber is combined with the right knitting process, it creates an extremely effective cleaning material. This material can hold up to seven times its weight in water. They are also used for some cleaning applications, because of their exceptional ability to absorb oils.

Rayon is a manufactured regenerated cellulosic fiber. Rayon is produced from naturally occurring polymers and therefore it is not a truly synthetic fiber, nor is it a natural fiber.

Spandex is a synthetic fiber known for its exceptional elasticity (stretchability). It is stronger and more durable than rubber, its major non-synthetic competitor.

Satin is a cloth that typically has a glossy surface and a dull back. It is a warp-dominated weaving technique that forms a minimum number of inter lacings in a fabric. If a fabric is formed with a satin weave using filament fibers such as silk, nylon, or polyester, the corresponding fabric is termed a "satin".

The popularity of stockings increases and decreases with fashion. It was formerly made of woven cloth but now of knitted wool, silk, cotton or nylon.

The most common and well-known use of corsets is to slim the body and make it conform to a fashionable silhouette. For women this most frequently emphasizes a curvy figure, by reducing the waist, and thereby exaggerating the bust and hips. However, in some periods, corsets have been worn to achieve a tubular straight-up-and-down shape, which involves minimizing the bust and hips.

A wide variety of types of panties exist. Bikini panties are designed so that the hip connectors are small, like on those of swim wear. String bikini panties are the most commonly worn type in the United States by high school and college age women, and are similar to regular bikini panties, but instead of a thin hip grip, they have a small string, which sometimes ties around the waist rather than being pulled up over them. String bikini is considered more revealing. String bikini are usually made of satin or silk, but occasionally from other fabrics. High-cut, or control top, are cut higher on the hip to slightly pull in and shape the stomach to conceal obesity. High-cut are usually worn by older women and are often shunned by younger women. Boy shorts describe a type of female underwear that has a lower, thicker cut of material around the hips, making them appear as shorts that men would wear. They are sometimes by men and women alike criticized as not being feminine, although some women do wear them. The g-string is a thong panty with a string running between the buttocks. It is often jokingly referred to as "floss" by critics and some comedians.

Panties are made of a variety of materials and fabrics including satin, silk, pvc, cotton, nylon, mesh, lace, rawhide, leather, lycra, and/or polyester.

In British English, and in places such as Great Britain, Wales, Australia, New Zealand, Scotland, Ireland, South Africa and India, panties are often referred to as knickers. The term knickers is not generally used in The United States and Canada, where the term "panties" is usually favoured.

A G-string (alternatively gee-string or gee string) is a type of thong is a narrow piece of cloth, leather, or plastic that covers or holds the genitals, passes between the buttocks, and is attached to a band around the hips, worn as swimwear or underwear by both men and women. 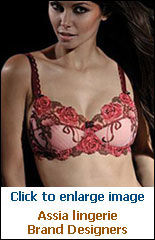 A brassiere is an article of clothing that covers, supports, and elevates the breasts. The bra is considered a foundation garment, as well as an undergarment, because of its role in shaping the wearer's figure. It was originally developed in the late nineteenth and early twentieth centuries to replace the corset, and has now become, in many parts of the world, the most popular form of undergarment for the upper body, although camisoles and chemises are becoming more popular.

The bra may be worn to support and enhance breast shape during everyday activities and a specialized bra, the sports bra to support and restrain breasts during exercise. Some wearers believe that wearing it will prevent their breasts from sagging later in life.

A wide range of styles of brassieres now exists, to be worn in a variety of situations, and with a variety of outer-garments. For instance strapless, backless and multi-way bra styles specialise in being invisible underneath less than full coverage garments whereas push up and plunge focus on shaping the bust and cleavage. The degree of shaping and coverage of the breasts varies between styles, as do functionality and fashion, fabric, and colour. Styles range from the purely utilitarian to the sensual. Others include various accessory structures such as padding and under wiring.

About the French Lingerie Shop.com

&sec=article&uinfo=<%=server.URLEncode(1842)%>" target="_blank">www.frenchlingerieshop.com is the first store on the web which proposes only French lingerie designer's brands and which can satisfy all women. Lingerie "haute couture", tailor made lingerie, fine fabrics like silk, semi precious stone, lace made in France, unique piece, maternity and pregnancy lingerie and the best range of size from the voluptuous to the twig women.

This online store proposes you original product as good support. Lynda Adraste founder of the website, FrenchLingerieShop.com (which was launched in September 2008) presents a dedicated space for the creation of the French "haute lingerie". As an art galleria, each designer is presented on the store: his vision of lingerie, his universe and the story of his brand, she makes this store a unique space where all women can find what they are looking for.

Full images are republished with due permission from &sec=article&uinfo=<%=server.URLEncode(1842)%>" target="_blank">www.frenchlingerieshop.com