Chinese dyestuff industry, the largest producer and consumer of dyestuff in the world registered negative growth in 2008. Total Chinas dyestuff production in 2008 was reported as 678,000 tons exceeding 50% of world total production while total consumption recorded as 502,300 tons. There are more than 300 Chinese producers contributing total dyestuff production capacity of about 800,000 tons.

Among exported dyestuffs Disperse dye accounted for 37.9% of total exported volume, which was followed by Reactive dye for 18.1%, Sulfur dye for 14.9% and Vat dye (mainly Indigo) for 10.2%. 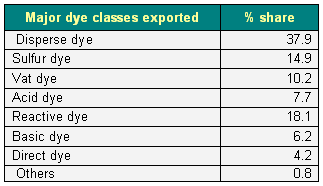 The main strength of Chinese Dyestuff Industry includes wide range of product variety, huge number of production units across the country and low price. Chinese dyestuff producers produce 11 classes of dyestuffs and there are 700 - 800 production units. Chinese producers are able to provide cheaper prices due to low cost of production and effective scale of economy. Average export price in 2008 was reported as US$ 4927 / ton while average import price was US$ 8044 / ton. In spite of low pricing Chinese producers offers reasonable product quality which gives them competitive edge over other major dyestuffs producing countries.

There are many problems that Chinese dyestuff industry facing today like - unreasonable product mix prompted by over supply in total capacity while many products in a shortage. Other problems include after treatment as a bottleneck rather than going for a proactive approach, low quality and less variety of auxiliary agents along with low level of finishing technology, which are the segments, should be given prior concern. Weak international marketing ability due to communication barrier is creating huge impact, even R&D is also one sector which needs further improvement. Apart from all these internal problems, Chinese dyestuff industry is currently under huge pressure for REACH implementation which is mandatory to continue export activity in European market. Growing environmental concern is giving tough challenge to Chinese industries. In recent time, profit is also reduced by cancellation of export tax refunding and increasing cost.

In coming periods imbalanced growth for dye classes are expected which will include quick development for reactive dye and slow increase for disperse dye. Future competition will be mainly focused on quality and service while environmental concern will catch more attention. Large players will be in need to adopt integration, differentiation and diversification strategies to sustain. Profit margin will reduced further due to increase in prices of raw materials, energy and labor cost.

For sustainability, companies will need to enhance their product quality and cut cost to stay competitive. Mergers & acquisitions along with increased co operation among companies should be encouraged. Future market wont be the right place for new players to take an entry. Large companies are expected to diversify their business and strengthen their operation management. Market segmentation and improvement in product mix can be effective future strategy. Companies should not go for price war, and should look for friendly co operation to enlarge their profit volume. To success in global market companies should look for foreign ventures and co operation for marketing and R&D. Eco-leveling can be an advantageous marketing strategy in future.