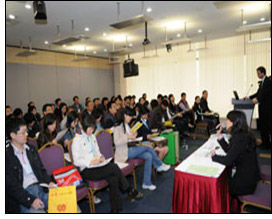 Through several years of stable development, China has become the world's biggest producer, trader and consumer of dyestuffs. In 2009, China produced 719,000 tons of dyestuffs and 182,000 tons of organic pigments. 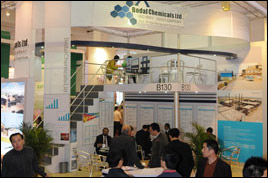 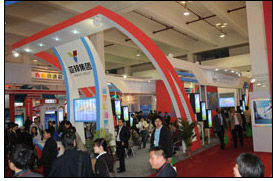 China Interdye celebrated its 10th anniversary this year. China Interdye 2010 accelerated the recovery of the dyestuffs industry from the most depressed season during the first quarter of 2009, to provide an industrial gala for both exhibitors and visitors, and to promote international trade and cooperation.

A special area with the theme of "energy saving and environmentally friendly" for the first time in China Interdye 2010, which was also a response to China's policy of reducing emissions and saving energy. The theme was highly accepted by the industry and meets the needs of their adjusting product structures and increasing companies' core competition. 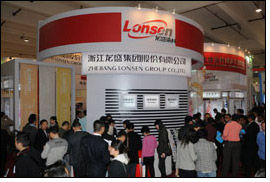 It is said that we should turn somebodys strength into our opportunity. Here I have to highlight the Chinese strengths. China's main strength in the world's economy is its amazing amount of cheap labour-- because of its massive population. For years to come China will be able to maintain the current low prices in the world marketplace. Though China seems like its growing and modernizing quickly, it still has about 800 million people in the countryside that are unknowingly waiting to be exploited in the "low cost manufacturing" niche that China is so good at. A niche that the world market will forever have a great demand for. Next, the incentives and concession they get from Chinese government such as tax concession ,Industry policy concession, Inspection and Quarantine Policy Concessions, Land and Resources Concessions, Financial Support and Incentives, Technological Policy Support, Also china has already developed its Infrastructure, Economic and Social Development, Market Awareness, and investment in Hi-Tech Industries. Of course, Natural Resources is god given gift to them. Opportunity is in importers approach like how effective they are to convert Chinas Strengths. 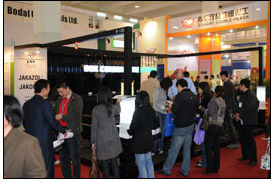 English Language! It was the one I found extremely difficult to manage with Chinese people. But the younger generations are realising the need of English to communicate effectively. But I am sure that the Chinese will overcome this shortcoming in the days to come by either learning English or who knows maybe by producing a hi-fi English to Chinese convertor gadget. They are hardworking, intelligent people, keen to study English.

To sum up, I would like to share that CHINA INTERDYE 2010 was one of the finest gatherings for the professionals associated with supporting equipment, dyes, auxiliaries, textile chemicals and related industries. The tenth edition of the show gathered a wide variety of exhibitors from across the globe, displaying the most recent product and technologies. CHINA INTERDYE 2010 provided an outstanding platform to source new business opportunities and build consequential business relationships with leading companies. The summit provided excellent platform for the overseas experts, scholars, top leaders and authoritative specialists to contribute advances in technology, development of new approaches, exchange ideas and to discuss about present and future trends. This meeting served as a fabulous platform to achieve valuable knowledge by the prominent experts and find out the latest developments in the specific region.