Crewel is a special kind of embroidery done with a pointed hook and used for drapery and upholstery. Rows of chain stitch done with a pointed hook form solid patterns usually rotating from the center and creating an embossed effect to add richness to the textile. Crewel is done on the thick material popularly used for furnishing and usually carries flowing floral and creeper designs. The thick material includes hand-woven Cotton Dosooti Fabric, Cotton Duck, Linen, Jute, etc. The Crewel embroidery, done in thick woolen yarn by a pointed crochet, provides a very dazzling and durable material for drapes and upholsterys. All embroidery is done by hand in either single or double ply wool. Designs are available in assortment of colors ranging from a single color to multicolour embroidery. The price is related with the amount of embroidery done on the material. The width of the material is 52, 54 inches and length is 25 or 28 meters per roll. The craft is also available on Bedspreads, Cushion Covers in various sizes. 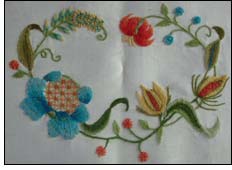 Crewel, also known as wool embroidery, has been around for centuries. The word crewel is derived from an old Welsh term meaning wool. The word referred to the wool yarn used for stitching and not the style of embroidery. Traditionally, heavy wools were used for this type of embroidery, but today there is a wide variety of yarns and even threads to choose from, depending on the desired effect.

Although crewel is considered the most difficult stitchery technique to master, it is ideal for pillows, curtains, clothing, and wall hangings. The use of tightly-woven fabrics enables stitchers to create an infinite variety of shapes. There are a great number of stitches that can be employed in crewel embroidery; these stitches add texture and depth to the finished piece. The outlines of the design are often screen printed on the fabric, and the stitcher fills in, or outlines, each area with stitches.

Crewel Embroidery, or Crewelwork, is a decorative form of surface embroidery using wool and a variety of different embroidery stitches to follow a design outline applied to the fabric. The technique is at least a thousand years old. It was used in the Bayeux Tapestry, in Jacobean embroidery and in the Quaker tapestry.The origin of the word crewel is unknown but is thought to come from an ancient word describing the curl in the staple, the single hair of the wool. Crewel wool has a long staple; it is fine and can be strongly twisted. Modern crewel wool is a fine, 2-ply or 1-ply yarn available in many different colors. 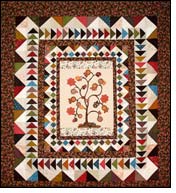 Crewelwork came to the United States from England, where it gained its popularity during the rule of King James I. This time in history was the Jacobean period and the embroidery of the time was called Jacobean. Crewel was taken from the type of yarn that was used "krua" which means wool. This wool yarn was a thin worsted yarn made of two threads. The term crewel embroidery actually means wool embroidery and today refers to the design of the period not just the wool yarn that was used in the stitching. The first crewel or Jacobean designs came from the orient and were called "palampores." These were painted or printed by the East India Company and sent to England. The Tree of Life was the standard design and was a stem rising from mounds or hills called "terra firma." It was exaggerated foliage and flowers with birds and other wildlife done in big and bold designs. Most of the crewelwork done was extremely heavy as these were used to decorate walls and beds that were to keep out the cold winds. There were no standard stitches that were used in doing the crewel embroidery but the most common stitches of the times were chain, stem, long-and-short, straight, satin, french knot, running, feather and herringbone. The fabric of choice during those times were very heavy to accommodate the uses. The colors were normally in the green and blue hues and only small amounts of yellow and muted shades of red were used. When crewel was introduced to the colonies it was scaled down to suit the needs of the times. The yarns that were used were also more crude than the European yarns and the first dye that was used was indigo and thus brought about an offshoot of crewel called Deerfield. Today crewelwork is done in almost any type of yarn and on any fabric. Only the style is the remnants of the original crewel of years gone by. 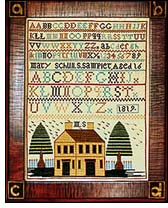 The crewel revival of the 1960's and 70's began mildly enough with Mildred Davis and Elsa Williams. Their discoveries and love of crewel focused attention on textiles preserved in museum collections for women who were still homebound. Erica Wilson, with her design ability and skill, represented a new freedom that was arriving quickly. When Susan Swan's book, Plain and Fancy, reached this market in 1976, a passion was flamed for textile research and study that continues today. Betty Ring's monumental work, Girlhood Embroidery, opened the past for many women who could clearly feel a connection to their history through embroidery. This excitement is reflected in amazing advancements in counted work on even weave linen by women relearning 17th century techniques who are no longer bound by previous conventions. Crewel embroidery has had many revivals since its English and American zenith of the 17th and 18th century. Each revival alters and redefines stitch names and techniques with losses and gains sustained during each period.

The word crewel, with a variety of spellings, can be found in English records back to the 13th century. It is thought to have come from the East to Egypt then to Greece and Rome where it traveled with the Roman conquests to England. From the 15th century crewel embroidery meant any embroidery technique using fine worsted yarns. I've been known to say repeatedly that the name surely refers to the effect of the sharp needle on your fingers while stitching. This is definitely an untruth for past usage of the word crewel included tent and cross stitch using an inoffensive tapestry needle. By the 20th century crewelwork had been redefined to mean surface embroidery with wool. Crewel, by definition, is the application of a variety of stitches to the surface of fabric, usually linen, following a design applied to the fabric.