Introduction to the veteran

The textile industry in Indonesia, similar to industries in many developing countries, has already a venerable tradition and is among the revolutionary sector in industrial manufacturing. The textile industry consists of a number of sub-sectors like weaving, knitting, finishing, batik printing, spinning and man-made fibre production. Usually the industry started with the production of finished products like textile fabrics and knitted goods, and also garments and household textile products. In Indonesia the weaving industry can be divided into two broad sectors, the modern power-driven machine sector and the traditional hand-loom sector. The Indonesian textile industry has developed itself as an import-substitution industry in the global textile markets. According to the data from Department of Industry and Trade, the number of textile and Garment industry in Indonesia was about 88 companies in 1987, and over 2000 in 1992, in 2003, it reached to 2654.

The severe competition from India, China, Pakistan, Bangladesh, Turkey, Mexico, and even Vietnam and Thailand is the major concern of Indonesia. The past few years have witnessed the huge investment of these countries flowing in a big way towards new machines and technologies, to arrange tactically, the upgradation, so as to become the new dominant powers in the international market. &sec=article&uinfo=<%=server.URLEncode(2690)%>" target="_blank">Fibre2fashion.com had an imperative interaction with Mr. Ansari Bukhari, Director General, Ministry of Trade and Industry, in which he said, "As one of priority industry to develop furthermore, Indonesian textile industry is facing contraints to develop more rapidly. To some extent, the industry shows a relatively low competitiveness, comparing to other competing countries such as India, Vietnam and not to forget mentioning China. All competing countries have adopted newer and better technology for manufacturing process that can deliver better products, more economically in terms of energy consumption, more eco-friendly and so on. Our data shows that approximately around 80% of Indonesian textile machinery are more than 20 years in age. On the other side, domestic markets are flooded by imported textile goods with cheaper price, hampering the industry to grow in appropriate manner".With the end of the quotas, these nations, especially China and India accounts to benefit most from the massive US and European markets, and hopes to become the largest suppliers to the EU and US market.

Here is the factual condition of the machineries that have been ageing since years. The textile industry really needs to look into the matter gravely, as the maturing machinery may hinder the growth extensively. Here is the percentage of machinery along with their ages:

Out of more than 4,100 textile companies, at least 774 companies need to replace their old machinery. Indonesian textile industry is now in a quandary situation, whether to allow it to shrivel, or try to revitalize it by restructuring and reinvesting. Now indeed there are some re-modernization plans coming up but all plans are waiting for government's financing. It is predicted that between US$5.0 billion to US$6.0 billion is required to update the existing machine and equipment.

Steps taken by the Government

Mr. Ansari Bukhari, Director General, Ministry of Trade and Industry, is of the oipnion that, "Based on many factors, the Government of Indonesia since 2007 has launched Indonesian Textile Restructuring Program to help the industry alleviating some of their problems in out-of-date or obsolete machinery. The main objective is to assist Indonesian Textile Industry in modernization for their machinery and equipments as well, by providing financial assistance for them.The scheme is divided into 2 sub-schemes. The first is for the company who bought their newer machinery first (either by  borrowing form bank, from supplier credits, or their own money); when they finished installing their own machinery, they were granted 10% reimbursement by the Government. The second is by facilitating a relatively soft loan to would-be applicants that intended solely to buy textile machinery (this scheme was discontinued in 2010, and perhaps this is that you might consider as "with-drawn and continue again"). The selection of applicants is done through delicate process and involving third parties as verificator to guarantee accountability, non-discriminative treatment and other responsible matters".

Government plans to collect funds to help firms to update their machinery. Many companies could not replace their aging machinery as they had been saddled with huge debts and poor cash flows. Now the government is trying to collect fund to support the replacement program. It advocates local banks to recommence their credit to this sector. And some local banks had expressed interest in providing loans for the replacement project. It is reported that at least 14 banks are interested in financing the industry.

The government of Indonesia is seeking the help of China in revival of its textile industry, and government is optimistic about the Chinese government for providing export credit facilities to China-based textile machinery makers to sell their products to Indonesia to replace the old machinery of local textile companies. China and Indonesia governments have also agreed to form a committee to come to common terms. To increase competitiveness of the local textile products deal with the incursion of China's textile, the Government has expended Rp 200 billion for reformation or regeneration of textile machinery. This investment has generated employment for around 42,000 new workers.

As per Mr. Ansari Bukhari, "The eligible participants are the whole textile industry from up-stream to down stream, incorporated in Indonesia having Governments Permit as a textile  industry, and installing new machinery with certain criteria such as main machinery or supporting equipments, power plant/material-handling equipments/cooling systems/waste treatment plants and all other kind of machinery & equipments all must be able to improve or showing efficiency and increasing productivity of the industry.

The achivements so far is, the textile industry is able to absorp a massive number of labours, earning foreign currency through export and catering domestic demands. During the 3 years implementation of the Program, we noted a satisfying responses from all involved parties and stakeholders as well". The following are the achievements of the program: 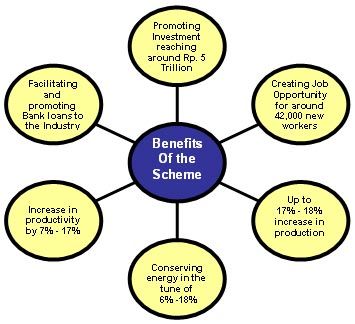 The revitalization scheme has already gone through many ups and downs. The scheme was announced in April, 2009 but was withdrawn because the cost of manpower was higher to govern the scheme, due to the low number of contenders but was again re-introduced with some revisions, in May, 2010, by the government of Indonesia, allocating Rp 9 billion for modernization of old textile and leather machineries in Small and Medium Enterprises (SMEs), On in sighting an answer about this with Mr. Ansari Bukhari, he replied, "The scheme was never withdrawn since the beginning (in 2007). We have a plan to maintain the scheme at least for 5 years later making evaluation to foresee the possibility and relevant factor in continuing it". The total textile production in Indonesia is assumed to be higher than $15 billion, and only a one-third of textile exports are implicit to be affected by the removal of quota system, so the scenario for the industry is still under control, though there has to be a meagre amount of cut in the selling prices by 10-15% to maintain a competitive edge in the global market
.

This policy of textile machinery modernization is considered as one big endeavor to improve competitiveness, the real implementation for the provision of assistance to the scheme. Though practically, the program faced many restraints in terms of lower fascination and bad credit repayment.Keeping in view the historical glory of the Indonesian Textile Industry, the Government assures that it will never let it fade away and that it will not be easy for the other competing nations to come up to the level of Indonesia that easily. May the attempts live up to the expectations!!!!