What is supercritical fluid?

Any gas that is above its critical temperature is able to retain the free mobility of gaseous state but if pressure is increased its density will tend to increase towards liquid. Such highly compressed gases are supercritical fluids and that is the reason they are able to combine properties of both liquid and gas. As shown in phase diagram below. 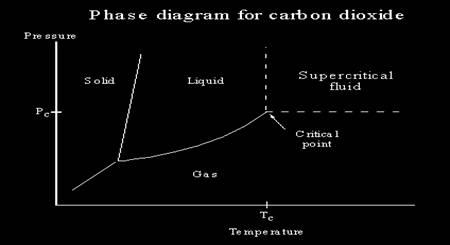 The textile industry is believed to be one of the biggest consumers of water. On average an estimated 100 kg of water is needed to process 1 kg of textile material. Water is used as a solvent in many pretreatment and finishing processes, such as washing, scouring, bleaching and dyeing. Although there have been efforts to reduce the water input such as altering conventional equipment, recycling water and reusing wastewaterwater usage is still high in the textile industry. Non-aqueous systems of dyeing can reduce or completely eliminate the amount of water used. Reducing water use provides environmental benefits as well as cost savings. Among the most promising of the non-aqueous systems is the use of supercritical carbon dioxide (CO2).

Concern over volatile organic solvent emissions and the generation of aqueous waste streams has prompted a number of chemists and chemical engineers to seek new, cleaner methods for polymer synthesis1 and polymer processing. The use of supercriticalcarbon dioxide (scCO2) has attracted particular attention in both of these areas for the following reasons:

Other advantages of the supercritical CO2 dyeing process are:

Note: At present, supercritical dyeing with CO2 is confined to synthetic fibers. For natural fibers the diffusion of supercritical CO2 is hampered by its inability to break the hydrogen bonds present in many natural fibers, including cotton, wool and silk. A further problem is that reactive dyes, direct dyes and acid dyes which are suitable for the dyeing of natural fibers are insoluble in supercritical CO2 and also dye may pptd out at such high pressure and temperature.

Dyeing of PET by Supercritical CO2:

Procedure: The process of dyeing by supercritical fluid begins with placing of PET packages inside the vessel in a dry state. CO2 is allowed to enter the dye vessel and the operational pressure and temperature(conventional dyeing temp of fibre)achieved. The dye is dissolved in circulating CO2 in the chamber. The Dyeing takes around half an hour under optimal conditions. The concentration of the dye compound in the supercritical CO2 determines the shade. This shade can be manipulated by density of supercritical CO2.Small quantities of modifier can increase the solubility of the dye. The dyeing cycle ends with the depressurization of the system and collection of excess dyestuff in the Recovery Vessel. A Typical Plant And Process Flow Sheet Is Shown Below,

Dyeing in supercritical carbon dioxide has been identified as one of the best alternatives to water-based dyeing and the same has been dealt in detail in this paper. But, this favourable concept is waiting for its commercial implementation. The successful commercialization of the above said concept will definitely improve the economics of dyeing by the way of elimination of wastewater discharges.