Humans might have discovered the simple process from the effect of the natural elements on the wool or fur of the animals. Wool felt or simply felt is a fabric that is formed when a sheeps wool or an animal fur has been exposed to heat and moisture. This process is hastened by the presence of an alkaline such as soap. The heat and moisture applied on the wool tends to open the outer scales of the fiber and the soap acts like a lubricant agent causing the fibers to slide easily over one another. This natural entanglement then becomes permanent and irreversible due to the chemical bonding of the keratin proteins present on the fibers forming the fabric.

As it is, the process is a fairly simple. This is actually the main advantage of felt making over other textile making techniques; there is a finished product in much lesser time of production. 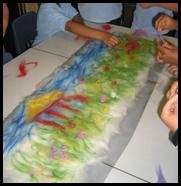 Humans might have discovered the simple process from the effect of the natural elements on the wool or fur of the animals. There are evidences that early humans used wool to keep their feet warm. Years of walking and stomping on the wool had made it stiff, which eventually turned it into wool felt.

The oldest archaeological evidences of the use of felt were in Turkey. Wall paintings dated back from 6500 BC depicted what seems to be a felt making process. The Romans and the Greeks of the ancient times knew of the uses of wool felt. In fact, Roman soldiers were found to have worn felt breastplates, tunics, boots and even socks as protection from arrows.

The process of felt making did not change much over the years. Varied discoveries during our age, of burial grounds of a nomadic tribal chief in Siberia, a warrior of the Iron Age in Scandinavia, and a body in an old tomb in Norway, all showed marks of wool felt usage as a body wrap.

Today, the felt is widely used in various parts of the world, most especially in areas with harsh and very cold climates. Felt is being used by nomads to make tents called gets or yurts in Mongolia. The hats, rugs and other similar items are made of felt in Turkey. Similarly, felt tents, rugs and blankets are used by nomadic tribes in South Central Asia. Felt boots are very famous in Russia and Scandinavia. Felt cloaks called kepeneks are used by Shepherds as protection against the rough climate.