After being in the fashion industry for 18 years playing various roles like an academician,columnist,designer and now a consultant the Author Sunipa Samadder chose this space to write on the most beautiful portion of fashion&textile for you to know and cherish.These are the booties and treasure of fashion & Textiles

Textiles which have ruled over dynasties have been a reason of power, withstood seasons of appreciation for years. Textile is a form of expression hence, like any other form of expression its vast and diverse. Secrecy in retaining the art complicate historical path.

Do we remember a world free of hunters? We are always in search, or hunting for ideas to ideals. The beautiful world of dreamers. We all cherish a beautiful dream but painstakingly weaving yardages after yard ages? One entire family weaving for years!! Yes such is the textile story, no wonder they are called Woven dreams-Kinkhabs, Shikargahs.Yes you did guess it right I am writing about Benarosi or Jamewar or Kanjivaram or as it  is known in the textile world Brocades. I would be sharing some information about it. 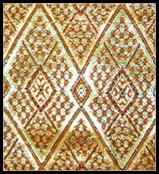 I believe my love for this fabric is a genetic factor. Buying the red Benarosifor the wedding and looking for one more. Brocades, the fabric indispensable from time unknown to time unseen, iconic, timeless, exotic and expensive. It is derived from Latin word brocare meaning to stab, or prick. Thus, the brocade weaving technique is often defined as embroidery weaving or loom embroidery. Although any fibre such as wool, linen or cotton can be decorated using this technique but its restricted to richly designed fabrics woven with silk and gold or silver thread.

Brocade is typically woven on a draw loom. It is a supplementary weft technique, that is, the ornamental brocading is produced by a supplementary, non-structural, weft in addition to the standard weft that holds the warp threads together. In general it can be explained as the most beautiful crafted fabrics, with a woven pattern which is purely decorative and independent of the structure of the cloth.

Ornamental features in brocade are emphasized and brought as additions to the main fabric, sometimes stiffening it, though more frequently producing on its face the effect of low relief. In some, but not all brocades, these additions present a distinctive appearance on the back of the stuff where the supplementary weft or floating threads of the brocaded or broached parts hang in loose groups or are clipped away.

I would not attempt to trace the history, but, would love to relate two small incidents which proves from time immemorable brocade is with us, In the Kalidas poem, Kumarshambhava, a disguised Shiva tries to dissuade Parvati from marrying him by comparing their attires.He asks Parvati, how she who is used to wearing, (swan patterned) Hansa Dukula can marry Shiva who is always clad in elephant skin. Later, Shiva transforms his elephant into Dukula,the borders decorated with pairs of swans, referred to as Hansa Mithuna.

Banbhatta,in Harshacharita(biography of king Harsha Vardhan of Kanauj),mentions a variety of textiles and garments made of Dukula(bark silk).He describes the king wearing a Hansa Dukula ,during the ceremony of his accession to the throne.

The terms Hiranya Drapi (golden drape) , Hiranya Chandataka  (golden skirt) or Hiranya pesas (golden embroidered) mentioned in ancient texts, the Rig-Veda and the Atharvaveda Samhita are the earliest references to Indian gold brocade .These gold and silver brocades (referred to later as Kamkhwab or Kinkhab )may have been similar to ancient fabrics such as Stavaraka or Debag decribed as rich material of Persian origin ,woven with silver and gold  thread . The sun god Surya is described in early literature as being clad in a coat of Stavaraka. A fabric such as this is also mentioned by Banbhatta,in(in the seventh century, a scholar in the court of king Harsh Vardhan of  Kanauj .) he refers to it as Tarmukta Stavarata brocade decorated with a border of pearls. He also mentioned the Hansa patterned material called Hansa Dukula a fabric used by the gods and kings.

Is brocade an Indian weave? Traces have been found world over and researches have brought it back to India too. All civilizations renowned for excellence in textiles, like Indian, Hellenic, Egyptian, Mesopotamian, Achaemidian, Sassanian, Assyrian, and Chinese, only a miniscule fraction of fabric samples have survived the depredation of time due to their fragility. This adds to the reasons of not summing up history in few words. They are elaborate incidents. Its a pity to sum up the vastness in few words. 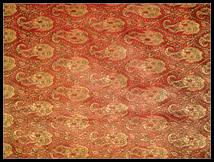 The best known brocade fabrics were the kamkhwab OR   kinkhwab.Varanasi, Ahmedabad and Surat were centers which specialized in weaving this fabric which is known worldwide .its splendor and elegance combined with its cost gave it a name which means something a person cannot dream of if he has not seen it (am little scarcely khwab dream) or a fabric which is seldom or rarely seen in a dream or the golden (kin) dream (khwab). Kin means golden in Chinese. Its specialty is such a profuse use of golden and silver thread that sometimes the silk background is hardly visible. It is used mainly to make heavy ceremonial robes, hangings and furnishings.

ALFI: this is a kind of patterned zari brocade used as dress materials especially for a tight fitting long coat a sherwani. it is an expensive and fashionable fabric used to make ceremonial outfits the golden or silver zari butis are outlined with single or double colored thread and the pattern is called meenakari (enameling) in alfi only the outline of the pattern is made with colored silk the inner work is always either in silver or gold thread double colored outlined alfi is more expensive because it is a needed ore skill and time in weaving .it is a specialty of Varanasi.There are various other type of brocades like Tashi,himru amru,mashru,tissue.Shikargahs,In the deccan the brocades took their names from their origins.kanchipuris,kanjivarams,dharmavarams,brocades from Gujarat and Maharashtra are equally mighty

Readers, the mesmerizing trip of brocade meanders through the globe and we stop it in Gujarat .I would throw light on the brocades of this region.

These heavy, rich, precious, handcrafted silks mostly got their names from the place where they were woven.

Ahmed Shah founded Ahmedabad in a.d. 1412, on the site of the old city of Ashaval.The Ashavali saris of Ahmedabad known for their beautiful Brocade borders and pallus take their name from the ancient town, which probably was known for making such fabrics.

The Brocade weaving centres always developed in and around the capitals of kingdoms or holy cities, because of the demand of the expensive fabrics by the royal families and temples. Rich merchants of the trading ports or centres also contributed to the development of these fabrics. Besides trading in the finished products they advanced money to the weavers to buy costly raw materials like silk and zari.Historical records of13th century throw more light on the fine textiles woven in Bharuch and Cambay.

Ahmedabad, Surat, Patan, Bharuch and Baroda were known for weaving. It is also mentioned in ancient literature that lat desh (south Gujarat) was renowned for its fine and expensive fabrics. Especially during the Guptas period (4th to 6th centuries a.d.),Gujarat Brocades had a rich gold or silver metallic background on which the patterns were woven, with colored thread, giving the fabric an enamelled appearance. The technique was also known as Zarbaft(zar meaning gold and baft meaning woven in Persian,or woven in gold)The Ashavali sarees are of the same genre.The background of the pallu and border is woven in rich gold thread in twill weave to reveal the maximum amount of gold thread on the surface. This style of weaving was also locally called as deshi vanat.Ashavali brocades or the 'fabric of dreams is a continuation of an old tradition kept alive on the borders and pallus.These areas were woven with mixed cotton and silk yarns. As silk was not produced in gujrat, was either imported through Khambhat from Persia,or from Assam or Bengal.

Gujarat Patkas are one of the finest examples of silk and zari brocades. The metallic ground in this has a supportive background of silk, which is visible in the reverse side.These Patkas or waistbands besides being imported from Persia they were probably made in Gujrat or the royal workshops

Religion played a major role in development of patterns and textiles, particularly in Gujrat. A religious sect called Pushti marg had many adherents among the affluent merchants, which led to the rise of brocade accessories .Small Pichwais(back drops),Torans(door hangings)Sidis(decorative covers for the steps leading to the throne of the deity)and Gaumukhis(gloves resembling the cows head ,used to keep rosaries held in the hand)were woven specially for the followers of the Pushti marg.The heavy silk brocades ,sometimes the strands were made of  three to six strands,were required for the style of dress  adopted by the Muslim rulers.A variety of brocade furnishing  fabrics were also made, based on Persian prototypes. The prayer mats, curtains, window covers, tray covers and square pieces to put on railings where the Emperor sat.

The Brocades attained such high degree of recognition for various other reasons, colour palette, colour blending, motifs, layout and styling.

Motifs were styled as butis or small motifs, bootas or bigger motifs, bel or floral border, zalis or trellises, arabesque and jharokhas or railings of the niches where the emperor sat. The stripes and checks were also lavishly used.

The decorative motifs were inspired from the nature, art and craft, monuments, statues, temples and daily utility items. The beauty of these motifs lies in their expression on to the surface in ornamental patterns. They are not flat direct interpretation but are stylized with aesthetic balance.

Architectural masterpieces which are the outcome of the blending of sarcenic and Hindu forms seemed to act as an illustrated pattern book for weavers. The multifarious geometrical decorations of these buildings were adopted as the chief motifs by the Islamic rulers. The introduction of zoomorphic art forms, that is animal or birds blending into flowers or leaves, became the new style. like hathi zal(elephant),mor zal(peacock),popat zal(parrot) dhanush zal(bow),badrum(ogival) so on and so forth.

Motifs were a rich mix of human forms, Gods and goddesses, dolls called putlis ,animals like-elephant, elephants with rider in rows,lion,deer,buck, camel, horse and cow, birds-peacock in single motifs, in pairs,parrot.Flowers had a Persian influence, We do get to see flowering hibiscus shrubs.  A predominant motif was Carrie (mango).The origin of the pattern may have been a swaying Cyprus tree, a closed bud or a mango. It was widely adopted, and later became popular in Europe as paisley design. The Indian Carrie is roundish and resembles a mango. The round part is called a belly (pet in hindi), and is filled with a floral or an almond shaped pattern called a guddi.

The cosmopolitan population of the state, such as the Turks, Arabs, and Mamlukes, Persians, Khurasanis, and European merchants added their influence to the existing art and craft forms. They belonged to rich textile weaving countries. A lot of Persian and central Asian weavers fromKhotan, Khurasan and Balkh were employed in the royal workshops.

Brocades being a rich fabric majorly contributed in the richness of the country. The Venetian traveler Marco polo and the Arab chronicler AL Newayri,both visited India in 13 thcentury have written about the brilliant textiles of Gujrat.

Hard work, fantastic craftsmanship, array of hues makes it a fabric of gods. Let us pledge to understand, protect encourage to be a part of its growth and cherish this treasure.

Beauty it has lets cherish it with divine,wash it with dews of diligence and not vanity

Here 'I' refers to the Author

Author is a consultant in a firm