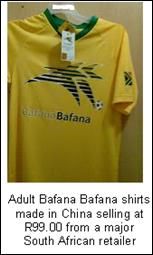 The amount of illegal soccer related imports plus the fact that the vast majority of the 2010 soccer items including Bafana Bafana shirts were not made in South Africa has not brought much sustainable development in job creation for South Africa's clothing and textile industries.

That is why it is important for South African consumers to support local products such as the new brand AfriCan. 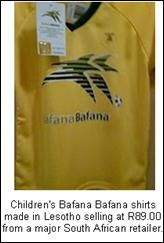 NTA announced that imports of counterfeit World Cup clothing to South Africa have blighted the countrys textile industry. While most official World Cup merchandise is made in the Far East, a segment of the South African industry had hoped to benefit from sales of locally produced official garments related to the national Bafana Bafana team. However, the influx of fake-branded clothing to South Africa has distracted consumers from purchasing indigenous goods-counterfeits have provided them with a cheaper means of keeping up with fans wearing licensed products.

In its announcement, INTA drew upon figures from the South African Clothing and Textile Workers Union (SACTWU), which indicate that 14,400 jobs have been cut in the countrys textile sector over the past year as a result of World Cup fakes. SACTWU general secretary Andre Kriel said that 2,000 jobs had been lost in Cape Town alone. Soccer supporters and South African citizens can save these jobs and grow the manufacturing capacity by ensuring that they buy locally made products, he added. 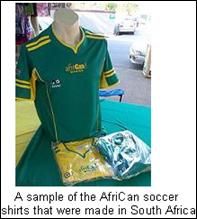 Merchants working for counterfeiting cartels have targeted unsuspecting tourists and fans, who have not always been able to tell the difference between fake garments and their official counterparts. But despite the negative impact that counterfeit goods have had on South Africas economy, seizure operations have been productive. In the past six months, South African customs authorities have impounded fake World Cup goods worth R66m, or US$8m.

INTA executive director Alan Drewsen warned that all consumers were vulnerable to fake-branded World Cup items, which are not just localised to South Africa. Fake goods not only mislead consumers, but lead to the loss of legitimate jobs in the affected industries, he said. FIFA and South Africa have increased their efforts to block the sale of counterfeit goods, and we hope that consumers will be watchful and not knowingly purchase any fake merchandise.