With around 7000 looms and 13000 weavers operating here, Bijnore cluster is the prime nucleus for products like Duster cloths, Home furnishing, and Dress materials. The Bijnore handloom cluster is stretched across a length of 60 km and breadth of 40 km. About 20% of the total production is supplied to Delhi based exporters like Fab India, All India Handloom Board & other major exporters through middle-men. The rest is sold in the domestic market at Naogaon, Sadat, Nahtore, Sheohara, Dhampur and Kath etc.

Fibre2fashion.com had an exclusive interview with Mr. Raman Shiv Kumar, CDP Officer of Bijnore Handloom Cluster, in which he threw light on Initiatives of Government by saying that, The IHCDP is being implemented in 20 handloom clusters across the country. This is a project of DCHL and started in the year 2006. Various implementing agencies have been appointed by DCHL for implementing this project. At the first instance an extensive baseline survey was conducted in all these clusters by the individual implementing agencies. This was followed by SWOT analysis based on which action plans are prepared for each cluster. The government has allocated rupees two crore for each cluster. The implementing agency gets the action plan approved by the APEX committee and the funds are sanctioned accordingly. This is a four year project and every year a fresh action plan is prepared and implemented. The important elements of the action plan are Marketing, Design development, and training, Technology up gradation, Infrastructure development and strengthening of association."

The weavers are taken to various tours to make them learn to work in groups. Trips to textiles fairs give them a detailed idea of variety of fabrics and products in the market, lot of finished products are developed from existing fabrics, and new fabrics & designs are also developed from which finished products are developed again. The weavers took part in various retail exhibitions where these products were displayed and sold. There was a good response for these products. The weavers participated in more number of exhibitions in various metros and their product knowledge and understanding of market requirement developed. The fabrics when converted into finished products attracted many bulk buyers during the exhibitions, which resulted in getting bulk orders. 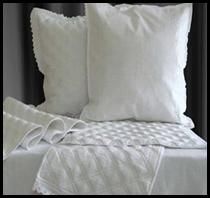 Features of the cluster

The handloom industry provides direct and indirect employment opportunity to approx.15000 workers. Around 99% weavers of the region are Ansari Muslim. Earning per loom/household is approximate `1500 per month. The average weavers' family size per household is 7 persons. Children between age group 12 to 15 are also working to help the family. Literacy among the weavers is 38%. Females also participate in operating the handlooms. The turnover of the cluster is approximately `16 crore.

Bijnore is well-known for mulmul and duster cloth. The mulmul was a very cheap quality product initially, and was being purchased in bulk by traders for making bandage cloth. With novelty in thoughts and attempts of the designer the same mulmul looms are now producing scarves in stripe designs. There is a good demand for these scarves since they are cheap and at the same time attractive.

Creativity combined with cost effectiveness and quality is the key factor of survival in todays competitive market. All our efforts in Bijnor are focused towards this objective.

Hand block printing has been introduced in the cluster as a value addition bustle. Already two training programs have been conducted till now which hopes to provide a good response in the cluster. People with a slightest of creativity and an inadequate investment can easily start commercial hand block printing. There is a very good demand for ladies dress material and bed spreads with hand block printing especially the ones printed with releasing techniques.

Five wheel take up motion has been installed in 20 handlooms at Bijnor handloom cluster. By installing five wheel take up motion all the defects can be avoided and the time lost in the tedious and slow operations can be saved. It has provided better quality handloom fabric as well as an increased production by 25 to 30%. Shirting fabrics of 2/40s x 20s quality are normally produced in these types of looms. A weaver can produce 12 mtrs of fabric per day in a handloom without five wheel take up motion. Where as the same weaver can produce 15 to 16mtrs of fabric in the same loom with five wheels take up motion. Mr. Kumar states on the Intervention Scheme that," The scheme has initiated the development of new designs and products by Designer, new market linkages, exposure to domestic and export markets, skill up gradation, enhancement of wages, good manufacturing practices and improvement in quality, etc.

On asking about the satisfaction level of the weavers by Governments initiatives Mr. Raman Kumar says," Overall response is good. And the weavers feel that the project should be continued with additional funds."