An Analysis of Current Scenario of Indian Textile Industry

Indian Textile Industry is one of the leading textile industries in the world. Though was predominantly unorganized industry even a few years back, but the scenario started changing after the economic liberalization of Indian economy in 1991. The opening up of economy gave the much-needed thrust to the Indian textile industry, which has now successfully become one of the largest in the world.

Indian textile industry can be divided into several segments, some of which can be listed as below: 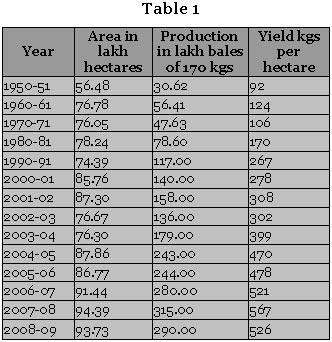 India textile industry is one of the leading in the world. Currently it is estimated to be around US$ 52 billion and is also projected to be around US$ 115 billion by the year 2012. The current domestic market of textile in India is expected to be increased to US$ 60 billion by 2012 from the current US$ 34.6 billion. The textile export of the country was around US$ 19.14 billion in 2006-07, which saw a stiff rise to reach US$ 22.13 in 2007-08. The share of exports is also expected to increase from 4% to 7% within 2012. Table 1 shows area, production and productivity of cotton in India during the last six decades.

Though during the year 2008-09, the industry had to face adverse agro-climatic conditions, it succeeded in producing 290 lakh bales of cotton comparing to 315 lakh bales last year, yet managed to retain its position as world's second highest cotton producer.