South Africa with a new economic freedom, the country is developing rapidly into a hotspot for textile, and apparels, attracting the eyes of the world. It is rapidly becoming a preferred sourcing destination for many international apparel makers.


Retailers believe that 2008-09 were the worst in the past 20 years. Global recession has caused some retailers to fall off the map, and left many others struggling for survival. Reported declines were from all fronts; manufacturers, distributors, and retailers. Now in 2011, the countrys textile and apparel sector is showing positive signs of improvement. Consumers have started to trade up, and retailers are actively chalking out plans to enhance their existing opportunities. Industry analysts predict that South African textile and apparel sector will witness a sturdy growth and have a commercial market by 2015.

Textile and apparel exports from South Africa are mainly directed towards UK, France, Italy, Japan, and Taiwan. Wool, coarse & fine animal hair, braids, synthetic filaments, and woven fabrics of cotton are the main items of textile exports. A reduction in the import duties of US is likely to enhance textile and apparel exports of S Africa to US. Most of the textile industries are concentrated in the coastal areas of Kwa-Zulu Natal, West & Eastern Cape. 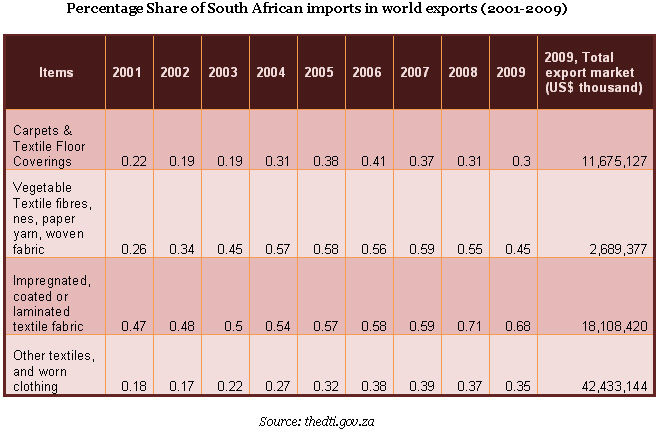 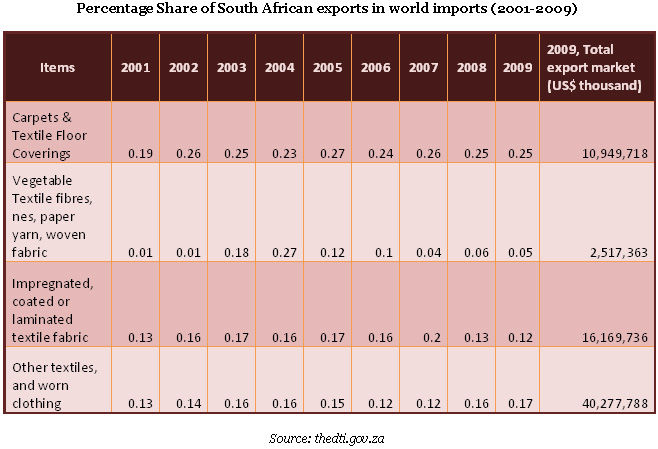 Textile industry in South Africa is not competent enough to manufacture technical textiles and apparels. They are generally sourced from other proficient countries. This can be commercially utilized by exporters from other countries. US apparels have good reputation in South Africa due to its superior quality. However, unfavorable exchange rates, and tariffs have made US apparels quite costlier. To become price competitive, retail outlets in S. Africa are sourcing apparels from the Far East where the US styles, and patterns are imitated.

Consumers of South Africa, on an average, spend 7% of their annual income on clothing. They generally, are more price sensitive. Retailers who seek entry into the country should keep in mind, that price increases will not be welcomed in Africa. There is a promising growth for apparel retailing in Africa, as prices are likely to remain static during 2011.

The growing middle class population also fuels the demand which forecasts to improve sales as economy recovers. A vast majority of the South African population falls into the category of the middle income group, and are likely to emerge as a dominating source in the apparel sector. There will be a noticeable shift in the purchasing power of these people.

Provided with the current market situations, prices are not expected to increase, which would favor the apparel retailers. But with a probable increase in the cotton prices, and wage hikes in China, market may face unfavorable conditions in Africa.

During 2009, South Africa experienced local and foreign traders engaged in smuggling, and pirating the designs of local printers, which brought the local textile manufacturing industry to its knees. The state of Ghana lost around 300 billion cedis (Ghana currency) due to textile smuggling. The Government, manufacturers, and retailers need to develop commitments for a common action plan to enhance the growth of the textile industry. Still, the industry was able to restructure itself to survive, and develop.

As the Sough African Government comes up with various incentives, supporting and benefiting the clothing sector, textile and apparel segment may have to face a hard-hitting competition by 2015.

Despite all hardships, S African textile and apparel industry, in quest for competitiveness, is showing improvements supported with an up gradation in technology.