The kind of tennis apparel we know today is far from the formal attire worn by players during the early Wimbledon days. For over 100 years, social changes have shaped the trends in tennis clothes. Through the years, people have become more daring in the way they dress up and so have sports outfits such as tennis clothing items. It's interesting to trace the roots of tennis clothes and how they evolved over the past years. 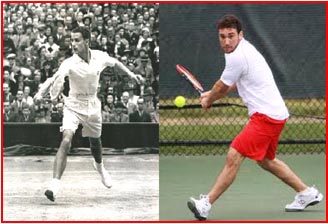 The earliest tennis clothes for men were made up of cardigans or sweater vests, shirts, and long flannel pants. In the 1930s, male tennis players changed their tennis outfits by tossing out flannel pants in favour of shorts. British tennis player Henry "Bunny" Austin holds the distinction of being the first top tennis player to wear white shorts in a tennis match. Since then, the standard fashion in terms of men's apparel included white shorts and pants. However, they were replaced by brightly coloured lycra shorts. Some tennis players opted for blue denim shorts or loose shorts instead of the longer lycra shorts.

Fast forward to 2005 the time when men's tennis clothes started to keep pace with the boldness of modern tennis attire for women. In several tennis competitions, one can see male players sport Capri pants and tight-fitting lycra tops that reveal their muscular chests and abs. Modern tennis clothes for men also saw changes in terms of colour. Quite a good number of men's apparel comes in feminine colours such as hot pink. 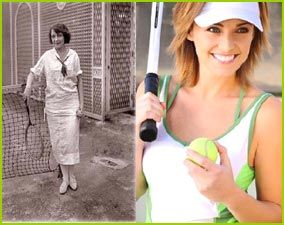 The history of tennis clothes for women is quite similar to that of men. Women started to join tennis games in the 1860s. During that time, female tennis players wore modest clothing made of heavy materials such as serge or flannel. Tennis attire for women in the early days of tennis include corsets with high-collared blouses and neckties, long bustle skirts (sometimes with fur), and skimmer hats.

However, the fashion trend changed when Maud Watson won the Wimbledon Ladies' Lawn Tennis Championship in 1884. Watson, the first woman Wimbledon champion, wore a white, long, bustled two-piece dress at that competition, popularizing the white tennis attire. Women realized that white was the best colour for tennis clothes because it didn't reveal as much sweat stains as other colours. This started the so-called tennis whites that have dominated the tennis scene for many years.

Bustles, corsets, and hats ceased to be common fashion items in tennis between 1903 and 1914. After the First World War, it was French tennis star Suzanne Lenglen who set the tennis fashion trend. Lenglen wore a daring calf-length, short-sleeved cotton attire with white stockings under her skirt. The French tennis icon experimented with her sports apparel by wearing colourful silk chiffon, a headband, and shiny white stockings. Her 'revolutionary' tennis attire caused a stir on the tennis court as spectators were used to the modest, and toned down attire of female tennis players.

In the 1920s, renowned American tennis player Helen Wills Moody become a trendsetter in female tennis attire because of her school-type sleeveless white blouse and pleated skirt with a fashionable eyeshades. She also added a lambswool cardigan on her apparel on cold days.

In 1949, Gertrude Moran shocked tennis enthusiasts when she wore lace-trimmed panties beneath her white tennis dress. This started the bold fashion trend of tennis apparel that continues up to this day.