The history of embroidery in Finland is made more complicated by the history of the country itself. For over five hundred years, Finland was considered an integral part of the Swedish Empire, only to end that era by becoming part of the Russian Empire for just over a century. When Finland did eventually manage to gain full independence in 1917 during the Russian Revolution, it was the end of over half a millennium of foreign domination, both politically and culturally. 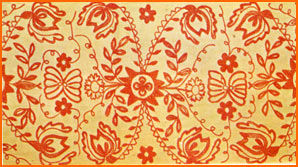 Finland naturally enough has a number of traditions that derived from outside the region, particularly that of Sweden and Russia. Finns themselves however, although seen as Scandinavians, derive their original language and culture from much further east and have strong links with cultures and peoples across northern Russia. Scandinavia is really a crude but convenient regional political generalization. It would perhaps be more accurate to see the area as western and eastern Scandinavia. The eastern would include Finland, Estonia, and some areas of western Russia, all of which share similar craft and to some extent, cultural ties that are distinct from that of their western neighbours in Sweden, Norway, and Denmark. 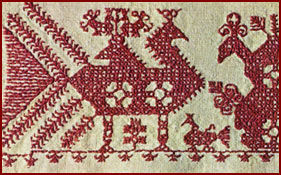 Much of Finnish embroidery was used in costume and was stitched onto a plain, often white background with either whitework or contrasting coloured threads, very often red being a particular favourite. Interestingly whitework was often used in Russia, and the use of red thread in particular was one of the most frequently and popular colours used. Finnish

embroidery shares many core values with that of its eastern neighbour Russia, including a number of the motifs and decorative borders. This is not to say that Finnish embroidery and craft skills in general were subservient to those of the Russian Empire. Finland always maintained, despite centuries of domination and forced integration into the cultures of firstly Sweden and then Russia, its own unique identity through its sense of history, mythology, and craft, and while embroiderers might well have borrowed or integrated a certain amount of decorative ideas and themes, Finnish embroiderers remained a separate craft region.

Embroidery was by no means the only craft skill that Finns excelled in, but it was one of the most widely and publicly accessible forms of craft, and as in most of Europe it was dominated by women who were often skilled to professional levels but seen as belonging to the amateur. Embroidery is often identified with the public face of a culture or indigenous group, and although a certain amount of the craft has been influenced by fashion and outside forces, the core value of this important and often-neglected skill remains. Finns, as in many other cultures, have access to their long cultural history through the often-anonymous work produced by generations of women and their embroidery. The craft, both living and historical, is an invaluable reference for the often complex cultural and craft history of the region.