The beauty and complexity of carpet design has been with us possibly since the invention of weaving and certainly for the last two millennia or more. Although much of the obvious design work for this discipline can be found in Asia, Europe does have a history of uniquely individual design work that is linked to both traditional regional craft styles, as well as more recently studio based work that was originally hand produced and then machine.

In the nineteenth century British carpet production in particular, was becoming increasingly part of the mass manufacturing industry. With the increase in production there was an equal need for an increase in the number of distinctive pattern work examples for carpets. These were procured from a number of different sources which included traditional Islamic carpeting, French eighteenth and nineteenth century work, along with contemporary design work produced by various British designers, a proportion of which were part of in-house design teams connected to the individual manufacturers of carpeting. 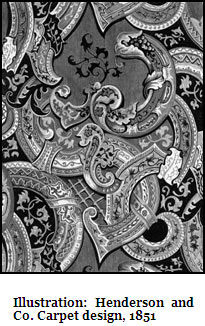 At least a proportion of decorative pattern work used in carpeting was derived from near copies of either existing work, or detailed drawings of styles both current and historical that could quite confidently be reused with little if any procedures concerning copyright. Copyright laws took much of the nineteenth century to systematically put in place, and much longer still to prosecute, particularly internationally.

However, original decorative work was possible and although perhaps being inspired from various sources, was still considered individual enough to count as unique. The two illustrations for this article show original design work for carpeting produced by the Durham manufacturing company of Henderson and Co in 1851. In fact, the two designs were entered as fitting examples of the work produced by the company for the Great Exhibition of 1851, held in Hyde Park, London.

The two designs are complex and varied. They seem to bring in elements from Indian decoration in particular, which is an interesting development, India becoming more and more important to Britain both politically and decoratively as the nineteenth century progressed. However, there seems in these two cases in particular, a marked allegiance to Indian marquetry and inlay rather than textiles. Indian inlay work was particularly popular and very much admired in Britain for its complexity, skill and beauty.

The first example in particular, shows a sophistication and understanding of decorative pattern work. Not only are the arced decorative motifs overlapping and intertwining each other, but also scales are mixed with small splays of arabesques being picked out in both light and dark colours against the more obvious decorative bands which appear as though thick borders. This particular example seems vibrant and full of movement and must surely have been a visual feast for the eyes.

The second example, whilst perhaps being more sedate in style, is nonetheless just as accomplished. The inlay styling whilst appearing a little more conventionally European in style, can still be associated with an Indian outlook. The differing styles of arabesque seem much closer in scale than the first example, although the differences are still there. Although both examples give only a sample of the full carpet design, it can be seen how the complexity of the decorative style was intended to be an all-over pattern. Interestingly, Henderson and Co were particularly known for their stair carpets and therefore these two pieces might well have been intended as either for that reason or all-over carpet flooring rather than the traditional four cornered carpet design, although there is no specific note of this.

It is unfortunate that neither example is in colour nor description of colours is given. However, it should be assumed, considering that both examples are from the middle of the nineteenth century, that they would have been particularly bright, even perhaps florid by our tastes, although richly decorated and admired by Victorian standards. Although they may well not be to our tastes, they have to be admired for the depth of decorative work entailed in their design.

This is probably the high point of this particular style of British carpet and is the end of a sequence of design work that had been produced with ever more confidence and sophistication since the early nineteenth century. Although this large-scale, colourful and demonstrative pattern work for carpeting was to persist at least through the 1850s, by the 1860s styles had calmed and become more conventionalised with borders, medallions and florals becoming more readily part of the standardised compositions expected from tradition. 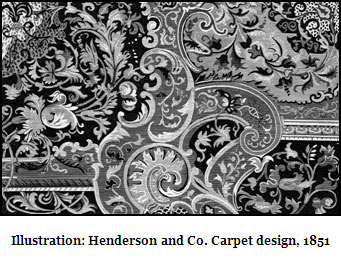 Although the first twenty years of the Victorian era in Britain, the 1840s and 1850s, are often looked upon as a particularly difficult time for the decorative arts, even as much as an intermediate era where design and decoration had little to offer and much to regret, it is perhaps worthwhile looking with a new perspective upon an era that at times at least gave the appearance of being little troubled by design reform and its obsession with correct colour combinations and pattern procedures. A period perhaps where colour, pattern and decoration were celebrated with large amounts of enthusiasm, frivolity and a coquettish amusement with the new and the novel. Although frowned upon by various parts of the Design Reform movement of the nineteenth century and certainly by the later Modernist movement of the twentieth century, there is an innocence to the exuberant decoration found in these carpet designs and the period in general in which they belong, an innocence that perhaps is sometimes overlooked.