Gold is a dense, supple, malleable and ductile metal that is shinny and yellow in color. Gold has a soft glow (luster), this means it reflects light. This quality has made it very attractive over ages and in many cultures.

As a metal, gold is classified as one of the least reactive, and it maintains its distinct characteristics without oxidizing in air or water. 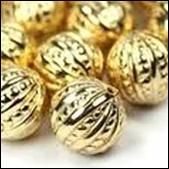 Gold was the first metal ever known to humans due to its occurrence in natural form in streams and riverbeds. Geologically, gold is widely spread, and its occurrence and attractiveness in most part o the world was exploited by virtually all communities who found it.

Unlike other metals that are found as ores, it is the easiest to work on because it does not require any smelting. All the communities that found gold used it for ornamental purposes, and it became very treasured over time that it was equated to and associated with deities and rulers. This made gold a symbol of power and wealth. As early as 4000 B.C. communities in Eastern used gold for decoration purposes. By 1500 B.C. Egypt became a wealthy nation due to the abundance of gold in its regions of Nubian.

The unique density, beauty and scarcity of this metal lead to its development as a medium of exchange since it was easily measurable. 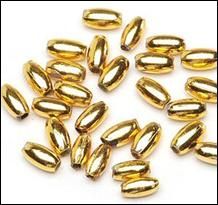 Gold beads have often been used for decorative purposes. These beads are either made from pure gold or from alloys.

Gold beads are used and valued as jewelry items such as wrist, ankle, and charm, slap and link bracelets. Necklaces and earrings are other ornamental items that can be manufactured using gold beads.

Brooches are jewelry items that are attached to garments. They may be made of beads. There are also gold beaded rosaries that are highly valued.

Gold is alloyed with different metals with the purpose of attaining various desired properties such as color and durability. Metals used to alloy gold include silver, copper, zinc, nickel, platinum and iron.

Silver and copper alloys of gold are green, red or yellow while those of zinc and nickel are white in color. Green gold beads are obtained while using only silver as an alloy. Purple or violet beads are alloys o aluminum and blues ones are alloyed with indium.

These beads are made by combining the gold metal with plastic to achieve a beautiful antique finish. They have the advantages of attaining the desired esthetic value at lower costs and being lighter in weight than pure gold beads. They are used on watches and other bead jewelry. These beads last for years without tarnishing. 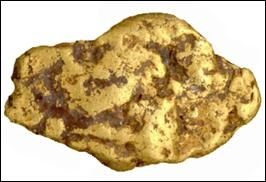 Welsh gold is one of the most exceptional and rare metals and gold jewelry made of it is highly valued. It is mined from three mines that are found in Wales. The most famous of the mines called "Clogua". It is known for producing gold with a rose tint. This mine is also popular for producing the weeding rings that were worn by Queen Elizabeth, Princess Margaret, the Prince of Wales, Princess Diana and Camilla the Duchess of Cornwall.

Old gold beads are used as a store of value and have often been invested in place of other types of assets. Aged gold jewelry are highly valued and sought after because of their historical origin. They come from ancient cultures such those of Egypt and India that developed gold beads for religious purposes, as symbols of class status and wealth and they signified power and identified members of royal families.

Investing in gold beads should be done carefully to authenticate their genuineness and origin. They often stored in financial institutions and insured. Over time the prices of gold beads are stable and have proven so even in times of world financial crises.

Gold beads implant are used in a traditional Chinese medicine practice called gold acupuncture to treat persistent arthritis of the knee, shoulders, elbows and hips in animals such as horses, cats and dogs. These are done as permanent implantation and have been observed to be efficacious since 1975.