The Revival of Honiton Lace 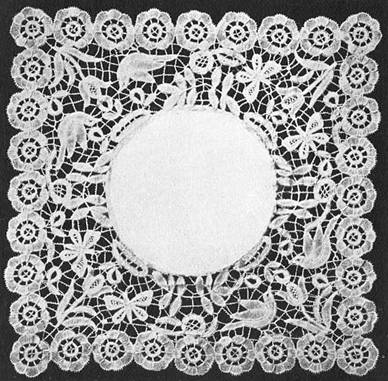 The town of Honiton in Devon produced some of the most sought after lace in England. It was said that the town had been producing lace since the Elizabethan era, although it is now thought that serious production of lace did not begin for another century after that.

Although lace making in Honiton and the surrounding area was given a boost when lace makers were commissioned to supply lace for Queen Victoria's wedding dress in 1841, the actual production of lace was in a slow, but general decline. Through competition from other, perhaps more prestigious lace making areas of Europe and through the incursions of industrial lace production, the Honiton lace craft was seriously challenged in both price and speed of delivery.

Although Honiton has given its name to a particular form of lace decorative work, it is largely because as a market town Honiton sold the lace rather than produced it. Much of the actual craftwork was produced in the many towns and villages in the surrounding area, such as Axminster, Beer and Branscombe. In fact, the actual lace for Queen Victoria's wedding dress came from Beer, not Honiton.

Perhaps a more serious long-term problem that dogged much of the lace craft industry, not only that of Honiton, was the poor overall design content of much of the work that was often derived from wallpaper designs and poor copies of European work.

By the beginning of the twentieth century, many local women chose not to follow the traditional route into the craft of lace production, finding more lucrative, less labour intensive and better-paid options elsewhere. The small industry was obviously struggling to survive, but with the help of the county council and a number of dedicated individuals, the industry did make some progress.

Through the organisation of pattern work, dropping sub-standard designs and introducing some contemporary work, the standard look of the craft was raised. Classes were also set up throughout the region, where older experienced women were persuaded to teach the younger generation the skills of the craft.

While the overall umbrella of the British Arts & Crafts movement did indeed help to revive a whole range of British hand craft skills, lace making did not prove to be as successful as some of the other revived crafts. Hand lace making, by its very nature, tended to be linked with that of the fashion industry, so while hand made lace was incorporated into fashionable costumes, it thrived, when it was excluded, even briefly, the industry suffered. Perhaps more importantly, lace production was always seen as one of the most labour intensive of the textile crafts and was always notoriously badly paid. 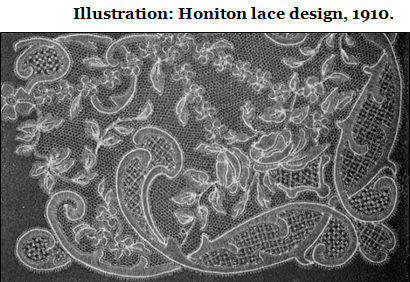 While the revival of Honiton lace during the first few years of the twentieth century was sorely needed and was widely welcomed, it was a temporary measure with little substance and no chance of longevity.

Industrial lace making now dominates the market, even though hand lace making survives as both a tourist and amateur interest. The industrial process has undoubtedly weakened and cheapened the craft so that mass produced lace now takes the form of the production of nylon net curtains that have only a vague and passing resemblance to the long and diverse traditions of the craft of lace making.