Application of Tri-functional Colors on Khadi to Create Cloudy Effect

Nowadays, some of the synthetic dyes are carcinogenic or toxic in nature and they cause skin diseases, allergy. They are harmful for plants, fish and other living organisms in water. So they upset ecological balance. Tri- functional reactive dyes are introduced to overcome this problem. They have extensive fixation rate and also they are eco- friendly in nature due to least dyeing residue. India is famous for its multi coloured textiles. Thermochromic colourants are one kind of micro encapsulated dyes that can reversibly change their colour by temperature change.

When temperature rises to specific temperature, the color changes. The color starts fading back to original color as pigment is cooled down. The advantage of using tri- functional colors is that the dye exhaust to the extent of 92 (+ $- 3%). Some of them also need less salt. So this process is pollution free and eco- friendly process. Tri- functional colours are especially designed to get cloudy effect on fabric. It resembles the tie and dye effect. They have no sharp boundaries and are less laborious. 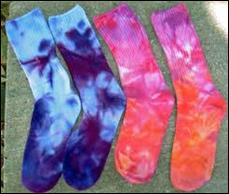 This endeavor study was done to introduce tie and dye effect through Trifunctionalcolous / thermo chromic colours. In this study, tri- functional colours were used to create vivid design resembling tie & dye effect. To attain the specific objectives of the study, it was divided into different phases- firstly; the fabric was scoured, and then dyed with tri-functional reactive dyes. After dyeing, fabric was tied with thread at different points. Then, samples were discharged and neutralized. After this, properties of both the samples (Tri-functional dyed sample and traditional tie and dyed sample) were assessed such as washing fastness, sunlight, ironing, rubbing and dry-cleaning and compared with each other and samples were evaluated by respondents.

Dyeing of textile is a very tricky process, which needs a lot of skill and definitely sound technical knowledge. Most of the dyeing in textiles is reactive. ie. Reactive dyes are used.

"Tri-functional dyes or colours" are especially designed for garment industry to get cloudy effect on garment. This cloudy effect resembles the tie and dye effect but is different from the above effect in following aspect.

Tri-functional reactive dyes or Thermo-chromic colourants are one kind of micro-encapsulated dyes that can change their colour by variation in temperature. When the temperature rises to a specified point, the colour changes. The colour starts fading back to the original colour as temperature cools down.

There in no sharp boundary as in case of tie and dye. There is merging effect where one colour gradually merges with another. Tie and dye produces, multicolour effect. Though sounding so simple, it is actually a complicated and skilled work of ornamenting the cloth with the combination of colours.

So this process is time consuming and there is wastage of dye. This process also produces pollution. So, to overcome these disadvantages, salt free reactive dyes were introduced in international market in the year1994.

They require less or no salt so it is cheaper and pollution free to create cloudy effect through tri-functional reactive dyes.

Thenceforth, the present study was conducted with the following objectives which included:

In order to achieve the objectives, the proposed work was divided into following heads:

The results of the study have been discussed under following heads:

It was found that the cloudy effect and tie ad dye effect had good to excellent fastness properties towards washing, dry-cleaning, ironing, rubbing and sunlight.

Comparison of colourfastness of the multicoloured samples

All the properties of both the samples were same i.e. good to excellent except in case of wash fastness, result was good. 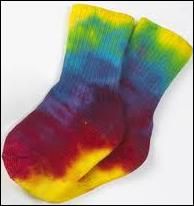