Most historians agree that silk and sericulture or the cultivation of silkworms had their origin in China nearly 2500 B.C. when Empress Si-Ling-Chi, the queen of the famous Emperor Huang-Ti, learned how to rear silkworms and unwind their cocoons to produce fine filament fibres. China kept it as a secret and held a monopoly in the silk industry for nearly 4,000 years after finding this knowledge. After this period, sericulture spread to Korea and Japan and it also spread around the world. Details about silk history and sericulture can be found in reference. 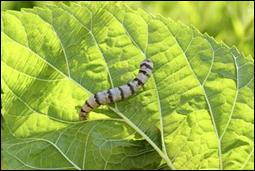 Silk is called the 'Queen of fibres'. Silk is a continuous protein fibre produced by the silkworm so as to form its cocoon. Some spiders belonging to the Arachnida family also produce the silk fibre. Unlike the silkworms fibre, the spiders fibre cannot be commercially produced, and therefore, the silk fibre referred to in this work is the fibre coming from the silkworm.

The silk fibre is a natural animal fibre. Silk contains a very small amount of sulphur, unlike wool. There are two types of the silkworms. The first type is the 'Mulberry silk' (Bombyxmori) also called cultivated silk and 'Wild silk' of which Tussah silk is the most important representative.