Lotus in Textiles - The Motif and the Meaning 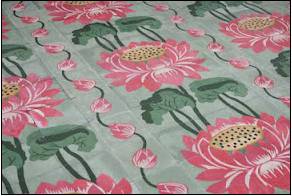 Indian textiles, with their excellent execution, vibrant colours and hidden interpretations have lured many a people. Their textures and motifs, whether woven or embroidered have always aroused interest. Among the innumerable motifs, that have been passed on to us, since centuries, there was one which was an emblem of special sanctity, and is still so in many parts of the world: the aquatic plant Lotus.

Lotus in its various forms has been adorning Indian textiles, since a very-very long time. But these beautiful flowers have not been merely used for decorative purposes; they have hidden meanings behind them. Somewhere they depict the Cosmos and somewhere else, the beauty of a woman.

Most of the famous Indian textiles like Kantha, Kasuti, Chamba rumals, Picchvais, Gujarat embroidery, as well as woven textiles, like Ikat and Paithani employ the lotus motif as the main motif, full of meaning and significance. 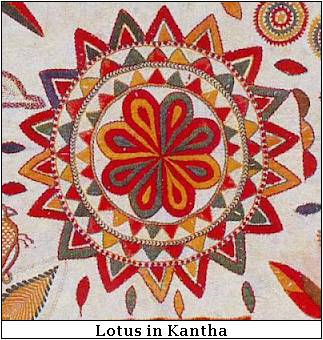 Man saw in lotus, a reflection of the solar system, and a relationship with the cosmic rhythm. This lovely padma, seemed to arouse everyones interest with its salient features of opening with the arrival of the sun, and closing with its departure. This led to a very logical conclusion, that lotus was the rest house of the sun. Therefore in Hinduism it became a symbol of the sun and of creation, as also in Jainism and Buddhism of perfection and purity, because its flowers grow in long stalks, high above the water, while its roots remain in the mud. With its roots in the mud, its stalk traversing the entire depth of the waters on which it rests its leaves, its flowers open to the light of the heaven, the lotus belongs to this world and to those above and below, to light, earth and water. This singular property of the lotus makes it a transition symbol. The fact that drops of water, roll off a lotus, like water off a ducks back, gives this unsoiled flower an added symbolic meaning, it becomes a simile for non-attachment. 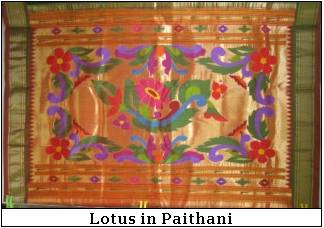 Padm, Kamal, Kumud, Pundarika and Pushkar are some of the names with which Lotus has been addressed in India. In Kantha of Bengal, the central mandap with the padma, forms the essence of the universe. The petals of a lotus vary from four to a thousand. The blooming of the petals, of the lotus expresses the opening of the universe. In Ikat fabrics of Orissa, the eight petalled lotus occurs frequently, where each petal represents, earth, fire, air, ether, mind, intellect and ego.

The Paithani of Maharashtra employs lotus in its most naturalized forms, here it is executed in brilliant colours, showing the efficiency of the weaver in executing this beautiful flower. The motifs are similar to those found in Ajanta and hence are more natural looking.

The Kasuti embroidery, which follows the warp and weft of the fabric, executes padma in a variety of ways. Here the motifs such as sparrows, swans and deer were used in combination with the lotus. 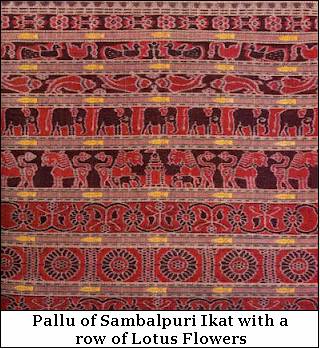 In Gujarat embroidery too, lotus is the most popular flower. It is used in the centre as the manifestation of the universe. It is also used as the seat of Gods and Goddesses. In North India, the Chamba rumals and Phulkari have also used lotus motifs extensively.

Lotuses have also dominated the carpet scene. In Tibetan carpets a variety of Lotus motifs can be seen. In a beautiful, religious Tibetan carpet, lotus is depicted in all its three stages the bud, the semi-open flower and the lotus blossom. There are others that depict lotus in a mandal form.

The national Flower of India, rich in symbolism, and perfect in beauty, lotus is still used today, as it was many years ago.