Rome is popularly known as an eternal city. Praised as the 11th most visited city in the world, Rome is also a rich source of inspiration of culture and fashion. Much of the Roman clothing is reminiscent to Greek clothing styles. Also influenced by the Egyptians during 200 BC, later on they developed their own clothing style.

Roman clothing was not just a means of covering their body, but it was highly symbolic, an indication of their class, social status, age gender, and occupation. Romans preferred to display around, and to the rest of the world, what their place was in the society. It varied in color, style, and adornments indicating the person's position in the Empire. Their basic costume was of two types, the tunics and togas.

While tunics were informal and worn as indoor costumes, togas were outdoor and official. Made of spun wool, white in color, often undyed, and unadorned, the tunic was comfortable for working and moving around indoors. People of the upper class people wore tunics with some decorations so as to distinguish themselves from the slaves. Togas had taken their inspiration from the Greeks. No foreigner was permitted to wear the toga even if he lived in Rome or Italy, and the apparel was an indication of roman citizenship. Toga was the official garment of both men and woman of Rome. Later when the trends changed, and togas were worn only by male Roman citizens.

Men's tunic was similar to a t-shirt with differences based on their class. Common people wore a tunic made of coarse cloth and were usually dark in color. Patricians wore white color tunic made of wool or linen, and shorter tunics were worn by the military people. Romans did not wear trousers, but later on they used one while they were hunting or riding called 'Gallic bracae'.

Women of Rome also wore a tunic extending up to their knees. They draped a stola over this with a grey, white or brownish hue. Roman women leaded the fashion with their use of shawls called pallium. Initially, togas were considered as official wear of both men and women. During the time of republic, togas were worn only by men.

Aspects of Roman clothing give enormous appeal to the Western imagination. Clothing style is many countries worldwide; have taken inspiration from ancient Roman styles. Ancient Romans believed that only barbarians wore trousers. Today, their legendary draped garments are replaced by tight fitting and sewn clothing. The ancient clothing styles of Romans have a strong influence on the modern fashion industry. Robes worn by the royal class of Rome are being interpreted by aspiring stylist. Designers, who take a deep dip in the ancient history of Rome, come up with modern interpretations of roman costumes which have an exotic and amiable appearance. 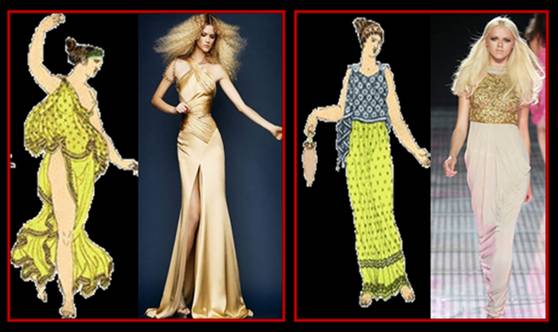 Fashion trends take a U turn into antiquity, and are now seen on runways. Models on the ramp are seen flaunting apparels designed and tailored; embracing the ancient roman clothing patterns. The wrapped up style of the ancient Romans have now taken a new form of men's outfit. Long tunics, and shawl draperies fastened to girdles, richly embroidered and fringed, serves as a design inspiration for modern attires.

Charming illustrations of ancient Roman women proves an attitude of rhythmic grace and goddess like beauty. Today's fashion designers take inspiration from the clothing styles of Roman women. Goddesses are never out of theme for fashion. Women look their best in a classic evening gown which takes its inspiration from the ancient Roman goddess clothing. Rich earthy tones of the Donna Karan collection, loose toga style dress, skinny belts, and metal ring details take their inspiration from Rome. Their clothing styles give a flattering and refreshing twist on the sophisticated women's outfits of today. Bridal wear in the Western countries have a veil and wedding ring inherited from the Roman culture. Slaves of ancient Rome wore a cap like cover called bonnet. The brimless caps manufactured by liberty during the 18th century had a resemblance to it. 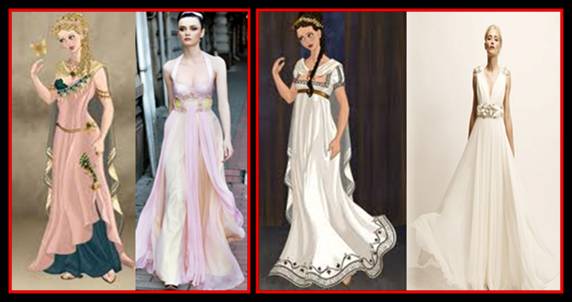 Modern clothing is a reflection of the ancient roman attires and a combination of both. The simplicity in the costumes of ancient Romans is now succeeded by the exclusive pageantry of the current day's fashion designers. Roman breastplate armor was used in the later years by Europeans in their military attire. During French Revolution, French officials were made to dress in Roman togas to indicate the importance of citizenship in a republic (as togas were an indication of citizenship among the ancient Romans).

Rome retains its splendor and fame as one of the greatest cultural centers of the world. Their costumes provide an insight into their national life and aesthetic values as well. Many of their costumes are refined by today's fashion designers proving that people are anxious to reinvent their past.