The growing potential of the BRIC countries are such that, industry experts predict by the year 2050, they would become the four major dominating economies. The question now is "Have we entered a multipolar world?"

Brazil, Russia, India, and China, popularly known as BRIC are predicted by economic analysts to account for 40% of the GDP by 2050. It is further set to become four among the world's top five economies. Jim O'Neill, Chairman of Goldman Sachs coins the word 'Growth Markets' to describe some of the world's dynamic economies. A report by the Goldman Sachs states that the BRIC countries have earlier weathered the global economic crisis in a remarkable manner, and is on pace to equal the G7 by 2032. Jim O'Neill says, "The fact of the matter is, close to three billion people around the world, which is half of the world's population, haven't really been touched by this crisis in the way that most people talk about." (Source: goldmansachs.com)

BRIC countries comprise more than 25% of the world's landscape and 40% of the world's population. They are accountable for a combined GDP of 15.435 trillion dollars. Strong polarization of buyers, growth in their income level, dual income, changes in shopping trends, and growing expectations of the middle, and upper middle class segments to wear branded, and global brands etc fuel the growth of these markets. 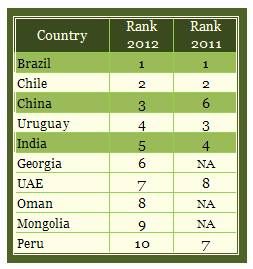 A.T. Kearney's Global Retail Development Index ranks Brazil in the first place for second time in a row. The top ten countries of the GRDI have a diverse mix of small as well as large markets in the nine years history of the index. The index states the BRIC countries show no signs of weakness, and proves to be the most tempting for retailers. Despite their small size, they have strong fundamentals that are irresistible to retailers.


Global retailers have realized that concentrating on core markets such as Europe, US, and UK alone will not help them to establish successfully in the global market. Global apparel makers, and retailers are now focusing on the BRIC countries; Brazil, Russia, India and China. Population growth and strong economic growth of the BRIC countries are making their appeal in the eyes of the global retailers. They are prioritizing development strategies by planning on expansion strategies in the emerging countries based on their political risk, retail market attractiveness, difference between the gross domestic product and the retail growth.


Brazil constitutes the fifth largest apparel market in the world. Much of Brazil's apparel market is dominated by the domestic players giving very little room for the entry of multinationals. Only a handful of retailers such as Mango, Zara, mom-and-pop, C&A, and Miss Sixty are successfully established in the market. The country's youth population and high per capita spending in apparels make the country a top destination for retailers.


Brazilians are very fond of shopping. Their shopping preferences are strongly dominated by their fashion sense influenced by the local celebrities. A survey done on Brazilian shoppers reveal that almost 80% of them shop frequently. Their focus of purchase is mainly to wear while going out with family and friends, whereas in India shopping is mainly done for occasions such as festivals and weddings. 8% of them wear similar type of clothing. Majority of the Brazilian consumers prefer local brands over foreign ones. They also agree with the fact of buying clothes on credit. During the past 7 years, Brazil's population has added 40 million middle class people. Brazil is not much exposed to the global market.


Retail market for apparels is growing in Russia driven by higher income level, urbanization, and stronger middle class and infrastructure investments. Global retailers are expanding their brands through local partners across the region. 11% of the Russians wear similar clothing. Based on the unique characteristics of the local markets in the country, retail market is likely to witness sales growth than the previous years.


Russia is yet to find the magic mix of a competent Government policy, and social talents. Its cities need to modernize. Only a few of them like Moscow and St. Petersburg are fashion forward. Furthermore, Russians are still uneasy about China, anxious over Eastern countries, and do not trust Washington.


AT Kearney ranks India as the fifth attractive retail destination. With a GDP growth of 6 to 7 percent, increasing income, dual income, and rapid urbanization fuel its growth. FDI regulations were altered creating a major impact in the economic growth of the country. Important periods for apparel shopping include festivals, and special events of their families such as weddings. Per capita income of the Indian consumer is lesser compared with the other BRIC countries. Size of the men's apparel market is comparatively larger than the womenswear market. Men also have significant influence in the purchasing decisions of the family.


13% of the Indians are habituated to wear similar clothing to work; wedding, formal parties etc. 50% of them have the opinion that international brands are more superior in quality. Unlike a consumer from UK or US, apparel shopping is a family event for an Indian consumer. Almost 70% of the Indians prefer to go shopping along with their family members, and feel that it is the best way to spend time with their family.


China has moved up in A.T Kearney's retail index, to rank three. Future retail growth for the country remains to be positive, with predicted double digits. China is one of the world's largest apparel markets with more than 100 active brands. Its credit rating as per December 2012 it upgraded and is now higher then Italy, and as same as Japan.


China's apparel market is the third largest in the world, next to US and Japan. It is the fastest growing market of the BRIC countries. China's consumers prefer modern, and fashion shopping. More than 70% of Chinese apparel market is in modern formats. More than 40% of them wear similar clothing to work, wedding and other occasions. They have similar clothing tastes. Around 11% of the consumers prefer foreign brands.

Though a common practice all over the world, Chinese consumers prefer to choose clothing based on their prices; more. However, inflationary pressures are driving up the rents, and labor costs are soaring.


Apparel market in the BRIC countries is now rising above national and cultural boundaries following globalized trends and tastes. These countries represent good opportunities for retailers to establish their business, and also take benefits of the urban population. In the forthcoming years BRIC countries will remain as a priority market for global retailers. In today's retail market, growth is not about business expansion from developed into developing markets. It grows beyond that with the retailers using their exceptional insights to foresee those countries which are likely to come in the global radar in the near future.