A toxic chemical banned in Europe because it can cause burns, rashes and respiratory troubles has been found in imported children's school shoes sold by major retailers. Tests under- taken three months ago by the council of textile and fashion Industries revealed 25 per cent of the shoes it bought and tested contained the toxic chemical DMF (dimenthyl furmarate).

The tests follow a report by the council two years ago, which showed batches of children's school, sports and casual shoes contained numerous harmful chemicals, also banned in other countries.

Despite the results - and the same shoes being sent earlier this year to the Australian Competition and Consumer Commission, which is responsible for product safety - no action has been taken.

"We have taken it to the product safety authority and tried to raise awareness over the past few years, but nothing has been done," said the textile council's senior adviser, Andreas Schimkus.

DMF is used as an anti-mould agent in leather goods such as shoes, handbags, clothing and furniture. It is contained in sachets in shoe boxes, often imported from China. Currently there is no restriction on importing DMF in Australia; despite warnings issued in other countries that exposure to the chemical has been blamed for health problems including serious burns, dermatitis, and respiratory trouble. The harmful effects came to international public attention in 2008 when the BBC Watchdog program and a British newspaper ran investigative stories revealing numerous cases of hard-to-treat blisters and burns after they had come into contact with DMF sachets placed inside imported Chinese sofas. Victims included a baby from Leeds, Charlie Mather. 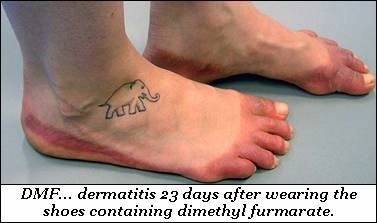 It was discovered that the body heat generated when coming into contact with sofas started a chemical reaction with the DMF, resulting in rashes and burns - some so bad they looked like cigarette burns.

The revelations caused the recall of thousands of sofas and other products and resulted in numerous product liability claims across Britain. The European Commission banned imported products with DMF in 2009, and shoes containing DMF were recalled from France, Spain, Poland and Finland.

A spokesman for the Competition and Consumer Commission said it had not received reports of an injury trend or pattern consistent with DMF exposure for textile, clothing or footwear products. "However, given overseas action, the ACCC approached the textile council to work collaboratively on a proactive testing program in this area," he said.

For legal reasons, the council has not named brands using DMF or retailers selling it. But it has warned there is no monitoring of chemical levels in imported products. Mr Schimkus said it was not just confined to the school shoes.

"Textiles, clothing and products including shoes are not subject to any investigation," he said.

The National Toxics Network, an advisory group on chemicals, has also called for "immediate investigation" to identify all products in Australia which may contain DMF.

A senior advisor for the network, Mariann Lloyd-Smith, a scientist specializing in chemicals, said Australia was at risk of becoming a dumping ground for contaminated products. "We are seen as an easy target," Dr Lloyd-Smith said. "Products are sent here because they know they can get away with it."

This article was originally published in "New Cloth Market", June, 2012.