Processability and Properties of Fabrics Produced from Sansevieria Roxburghiana L. Fibre and their blends with cotton 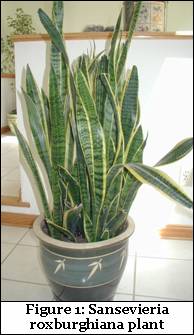 Now-a-days environmental issues are becoming vital factors during the selection of consumer goods allover the world remark Vasugi and Kanimozhi, 2011. Renewable resources are gaining popularity among the people due to their positive effects on agriculture, environment and economy. Thus the use of regenerating raw materials in industry could reduce this environment impact. Natural fibres being biodegradable are now considered as serious alternative to synthetic fibres for use in various fields.

India being a tropical country has wide range of plant sources which yield valuable fibres opine Kanimozhi and Vasugi, 2012. World wide there are more than 12 varieties of Sansevieria species present in different continents of which S. cylindrica and S. roxburghiana are commonly found says Kanimozhi, 2011. S. roxburghiana Fig.1 belongs to the family liliaceae. It is a xerophytic perennial shrubby plant with nearly 8 to 12 leaves in a cluster regard Kanimozhi and Vasugi, 2012. The flowers appear from the month of august - December in pale green tinged with violet colour. It appears in fascicles of 3-6 on 30-60cm long racemes. The fruit is a globose berry with 1 - 3 seeds ripening outside the pericarp.

M. Kanimozhi is a Research Scholar at the Department of Textiles and Clothing at Avinashilingam University for Women, Coimbatore.

This article was originally published in "The Textile Review", May, 2012.