Indian brands with foreign labels like 'Munich Polo' make name for themselves:

Pick the odd one out: Zara, Tommy Hilfiger, Munich Polo, Skechers and Pavers. Answer: Munich Polo. Reason: It's the only Indian brand amongst the lot of global labels. 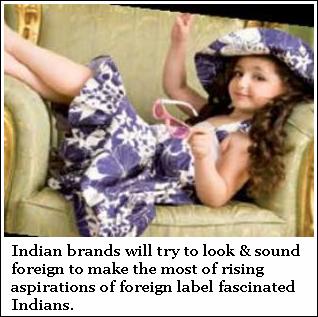 As the rush of single brands into the country-including those that have applied for approvals-peaks, a number of home-grown, international sounding brands are melding themselves into the retailing landscape.

"The trend will gather momentum," says Piyush Kumar Sinha, professor in retailing and marketing at IIM, Ahmedabad. Indian brands will try to look and sound foreign to make the most of rising aspirations of foreign-label fascinated Indians, he adds.

Munich Polo, which has positioned itself as a German brand and recently rolled out its premium kidswear stores in New Delhi, is the latest addition to the serpentine list of home-grown brands flaunting foreign tags. These include Da Milano, Franco Leone, La Opala and Monte Carlo.

Munich Polo uses the German language and depicts Munich's rich cultural history on its website. It draws inspiration from Munich's heritage for its apparel designs, and uses fair-skinned child models to give the brand a German look and feel. When contacted, a Munich Polo spokesperson did not comment on why the brand has appropriated a German name and positioning.

Another local brand Da Milano, a high-end leather accessory label, is widely perceived to be of Italian origin. Company officials refused to comment on the brand's local origin.

But why did the brand continue to use a foreign name in India? Simple, it makes immense business sense. "It has to do with the Indian mindset. We love and easily accept European and American fashion because it is aspirational," adds Bhamri, who roped in Bollywood star Ranbir Kapoor as brand ambassador last year.

Bhamri himself is one such consumer who would prefer a foreign brand over an Indian one. "Despite the high quality of Liberty (Shoes), I would still prefer Lee Cooper because of its foreign tag," he shrugs.

For Monte Carlo, a 26-year-old woollen wear brand from the Ludhiana-based Nahar Group, having a foreign name does have some advantages, but it has to be reinforced by quality of the product.

"The name is built by customers, not by brands," says Sandeep Jain, executive director of Monte Carlo Fashions, which was hived off from Oswal Woollen Mills of the Nahar Group last year. 100% foreign direct investment for single brands will only help raise awareness of their local counterparts, he argues.

Veteran adman Piyush Pandey thinks a foreign brand can be a double-edged sword. If it doesn't deliver its promise, it is doomed to bomb. "Consumers are not stupid, says the executive chairman & creative director of Ogilvy South Asia. "You can fool them once, but not twice. If you claim to be an Italian brand, then you have to deliver Italian quality. If you don't, people won't buy it."

Pandey turns the trend of foreign-sounding desi brands on its head by pointing to international brands with Indian names. Like French jewellery house Boucheron that has a perfume exotically branded Jaipur. "Now, calling it Jaipur doesn't make it an Indian brand, does it," asks Pandey.