Home / Knowledge / Article / Industry / Obama's re-election : how much will it support the textile sector?

Obama's re-election : how much will it support the textile sector?

Honorable President Barak Obama celebrated his re-election, while the world is positively waiting; hoping that the coming four years would be different from the past four years. This is because the leaders of the two parties wish to work together. How much would the global textile sector be benefited out of this?

Fibre2Fashion had earlier covered President Obama's trade policies and its Impact on the global trade when he was elected in 2008. &sec=article&uinfo=<%=server.URLEncode(4475)%>" target="_blank">Click here to view the article. 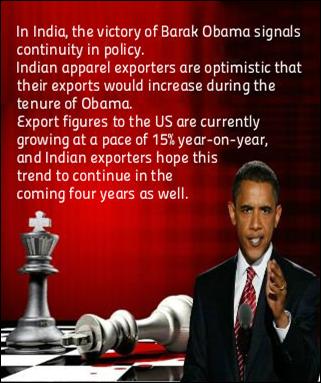 Many things are lined up to be taken care of, like the expiry of George W Bush tax cuts by the end of December to self-imposed sequestration cuts likely to be imposed. The President's inspirational speech soon after his victory called for the members of the Congress to tackle difficult issues facing the country. Tax policies are of significance to small business owners as most of them declare their business incomes on their personal tax returns. During his campaigns, the President said that he would extend his support to the Bush era tax cuts. Ending the Bush era cuts will increase the top tax rate of wages and salaries up to 39.6%.

In India, the victory of Barak Obama signals continuity in policy. The relationship with India and US is important. US considers India as a valuable strategic partner. Indias interest to work with US and other Asian countries forming a balanced economy, and Asian architecture lies in the country's sole policy determinations. Indian apparel exporters are optimistic that their exports would increase during the tenure of Obama. Export figures to the US are currently growing at a pace of 15% year-on-year, and Indian exporters hope this trend to continue in the coming four years as well.

Pakistan's apparel exporters believe that the victory would not bring much change to the country's trade policy with major new benefits accruing to them. Economists believe that re-election of Obama will augment the political and economic ties between Bangladesh and US. US is the single largest apparel export destination for Bangladesh. Garment exporters have been seeking duty free access into the US market during the past years. Currently they are paying an average 15.30% duty, while a few other developed and developing countries pay 4% or even lesser. Obama's plans are positively expected to revive the economic growth rate of American economy, and its investment scenario. It is expected to revive US economy which is also liked with Bangladesh's interest. So, it is believed to improve employment record, increase the income for American citizens, and expand the market for Bangladeshi apparels.

Obama has laid key themes for revitalizing the economy. The US President's plans regarding tax cuts for middle-class gives them more purchasing power. They are the major consumers of Bangladeshi apparels. During his election campaigns, Obama had spoken about increasing co-operation in the field of development including more support for investment and trade facilitation. Strengthening the US economy is believed to stabilize the global economy as a whole including the Eurozone. The spill-over of American economy on the Eurozone is also expected to augment exports from Bangladesh to EU.

Granting duty free access to countries is not just in the hands of the President, but also in the hands of the House of Representatives, and the Congress. Overall apparel exporters are positively hoping that US Government's textile policy stance would benefit export of apparel items.