Womenswear gets the 'Adam' inspiration

Mens fashion has always been a passion for women. They have taken the slacks and bowties from mens closets and are giving it a feminine touch.

Earlier, it was unheard of women wearing mens clothes. They stuck to conservative skirts, blouse etc. Katherine Hepburn, the infamous fashion icon made menswear a fashionable choice of women. This trend had been emulated by fashion designers for years. Today, contemporary women are turning tables, and are taking the fashion industry by storm. Menswear is a top fashion trend in womens fashion. Current trends for womenswear are unique, interesting, and collections that are menswear inspired ensembles. 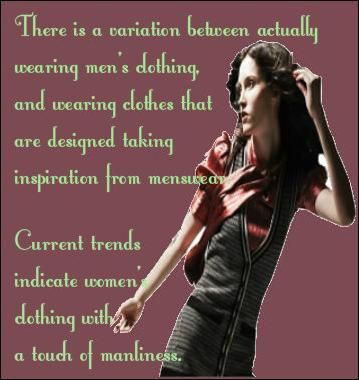 Many of the famous womens clothing brands have started off as mens brands. Ralph Lauren and Giorgio Armani are some to name. Retailers like Abercrombie & Fitch have revolutionized outdoor clothing like khaki pants and leather jackets for both men and women. Abercrombie was the first retailer to sell men and womens clothes side by side during the early 1900s. This probably might have inspired women who saw other options of clothes in front of their eyes, and led them to develop an interest towards mens clothes. Designers have realized that borrowing styles from boys means big business. They are launching menswear influenced womens clothes, capitalizing on the trend.

There is a drastic variation between actually wearing mens clothing, and wearing clothes that are designed taking inspiration from menswear. Current trends indicate womens clothing with a touch of manliness. Menswear can be converted into womenswear by giving it a feminine touch. Mens clothing can be dressed up with feminine belts, accessories, bangles etc. Mens blazer can be added with a pink or purple shirt, giving it a feminine touch. But care has to be taken while dressing up to get the dainty woman look, or else one just might end up feeling masculine.

Button up: Womenswear inspired mens slacks come with a button up feature to the collar and adding a chunky necklace to give a delicate appearance to the neckline. Mens cardigan can also be worn with a form fitting pant or a skirt.

Flowery shirts: Flowery shirts are paired with masculine layers creating an alluring contrast. Paired with indigo jeans and loose fitting blazer the outfit gives a casual and relaxed look making a statement piece. A flowery shirt with a sleek black jacket and a pair of raw denims will say enough without overdoing it. However, much attention has to be paid to keep the floral patterns more subtle or one would end up looking like curtains. 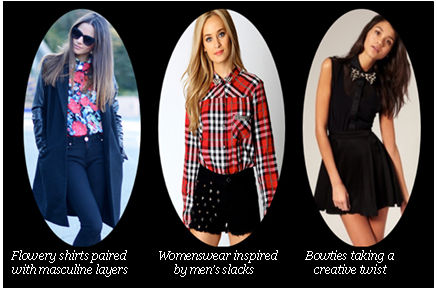 Bowties: Fashion designers are coming up with creative takes on bowties, a traditional male accessory. This can be tricky, and does not suit all women; necessarily. Will look spectacular, when worn with a heels and skirts such as tuxedo. They certainly add flair to the outfit, but a wrong choice will make the wearer look like a waitress. 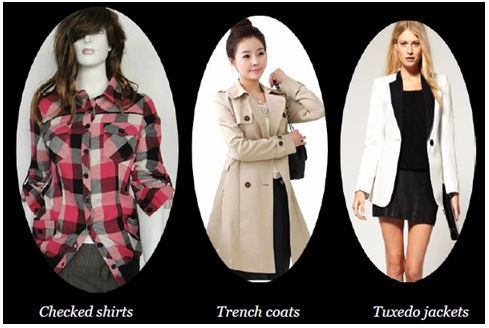 There is no denying their status in style, and this trend makes an evergreen fashion. Boxy, tailored and crisp checked shirts are more preferred by women who think their role has evolved in the corporate world.

Trench coats: Clearly borrowed from the mens section, this classic fashion had stood the test of time without going obsolete. The masculine trench coat is adopted by women and is being popularized in catwalks. Adapted and immortalized by fashion designers; globally, the apparel has taken a modern twist and is next to the second skin for the style savvy women.

Tuxedo Jackets: Mens jackets have made it to the runways of late. Tailored tuxedo jackets are seen flaunted by models in the ramp shows, along with ball gown skirts and ripped vintage Levis. Blurring the gender division, tuxedos are chosen by women who go for a sophisticated glamour look. An outfit with a potential for reinterpretation, the trend comes with femininity spiced with a difference. Latest trend take cues from the 70s with wide peaked lapels and many interesting ways to stand out in the trend.