Chinese are quick to boast about their 5,000-year legacy of culture and learning. Yet history is often the missing element for would-be Chinese luxury brands now seeking a piece of their own market.

Long tradition has been a mainstay for internationally recognized luxury products, and the Chinese market is no exception. About 40% of wealthy Chinese surveyed by Hurun and Industrial Bank rated "long history" as an important characteristic for top-end brands. 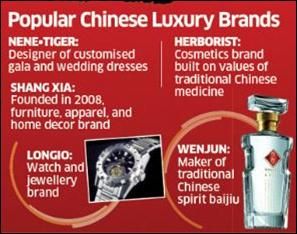 Yet few Chinese luxury products survived the period between communist takeover and the country's reform and opening, a span of roughly 30 years ending in the late 1970s. The lone survivors of the orthodox communist years, such as the liquor Moutai, have translated officially condoned prestige into hugely successful domestic businesses.

Other Chinese companies, mostly clothing designers, are attempting to bridge the gap by reaching into the early years of the 20th Century for style inspiration with Chinese characteristics. Results have been mixed, however; some Chinese companies are inching toward the prestige of brands like Louis Vuitton and Chanel, but many others fall short.

Spirit of the People

Moutai, a type of strong, sorghumbased spirit known as baijiu, can often be spotted in dusty black and white photos of Mao Zedong and Zhou Enlai, two of China's immortal leaders. Kweichow Moutai has become the market leader for sales of the traditional Chinese spirit, as well as one of the most highly valued companies on the Shanghai Stock Exchange.

Moutai refers to a city in Guizhou province where the product is made, and the name has taken on brandlike qualities of its own. In a survey on China's luxury gift market earlier this year, the Hurun Report found that Moutai rated fifth on a list of 10 upscale brands, higher than Dior, Prada and Armani.

Only a few other legacy Chinese brands have been ushered into the present. Panda cigarettes, which became famous between the fingers of late Chinese reformer Deng Xiaoping, often accompany small glasses of baijiu at the banquet table. The brand's luxury line now sells for more than US$600 a carton and aficionados know to expect long waiting lists for the product.

It was recognition as longstanding Communist Party classics that boosted the brands to the forefront of China's gift-giving culture, a practice in business and politics that walks a fine line between graft and decorum. China's Premier Wen Jiabao earlier this year vowed to cut steep baijiu outlays from government coffers.

"Cigarettes and drinking and baijiu are synonymous with the luxury culture here. It's not just about giving someone liquor. It's about the social value you give someone," said Jeffrey Tan, StarcomBSE -4.98 % MediaVest Group's China research director.

Too Fast to Last

History has been less kind to the nonintoxicating segment of China's luxury market. Chinese companies that made cosmetics, luxury clothing and jewelry - all unwelcome symbols of decadence - shuttered their doors between the 1950s and the late 1970s. The economic and political progress of the last 30 years hasn't bridged that gap to the past.

"Development in China has been so fast, and everything is so new. A lot of what distinguishes a luxury brand is its history. Ninety percent of luxury brands took years to get this distinction," said Tim Schlick, a Shanghai-based marketing expert and founder of consulting firm Schlick & Co. China's new brands have struggled to develop even in the midst of one of the world's largest luxury markets. Mainland Chinese are set to consume 20% of global luxury products by 2015, international business consulting firm McKinsey noted in a report last year.

Several homegrown luxury brands that lack a long history have reached into the depths of China's culture for unique but distinct traits. The designs of domestic clothing labels such as Shang Xia and Shanghai Tang often reference chic early 20th Century Chinese styles. Shanghai Vive, established in Shanghai in 1903 but dissolved in the early days of communist rule, re-launched its line of skin care and clothing products two years ago.

But the gap of more than half a century looks more like a chasm for Shanghai Vive. Although priced for first-tier luxury boutiques in Shanghai and Beijing, its historical lacuna is stark beside the uninterrupted stories of many Western brands. The company has struggled to convince retailers of its sales potential, Tan at Starcom Media Vest said.

"They had to overcome a huge obstacle in terms of distribution and visibility," he said, adding that many distributors in prime retail venues have opted for more recognizable names in their display cases. "That has changed quite a bit recently but they are still perceived as a lower grade brand."

Shanghai Tang hit storefronts in New York and London before appearing on the mainland in the 1990s. The brand's biggest market last year was Hong Kong, where it was established in 1994, but it has several outlets on the mainland.

However, companies will not always capture high-spending customers simply by reconstructing the past. Brands will find their cultural resources useful - even necessary - in differentiating from Western luxury, Gu said. But without the addition of modern design and technology, brands risk creating what she called overpriced "arts and crafts."

"The heritage is very important but it can only be regarded as a foundation," she said. "We need to inject innovation and create new aesthetics ... otherwise we will just be producing a modern antique or a souvenir."