Harboring at the emerging market potential

Urbanization in the emerging markets is making their presence and importance obligatory in the global economy.

Past decade has brought noteworthy changes and monumental shifts in the economic balance of power. Emerging market economies are expected to lead the global economy in 2013. Navigating past the strong economic headwinds, these countries seem to lead the charge. Emerging markets have physical and financial infrastructure such as banks, stock exchange and unified currency. Globalizing on their rates and expansion, these countries are getting dependent on the strength of the global economy. A McKinsey report predicts that by 2025, the annual consumption in the emerging markets is likely to grow and reach $30 trillion. This is a great opportunity for brands seeking entry into new markets. 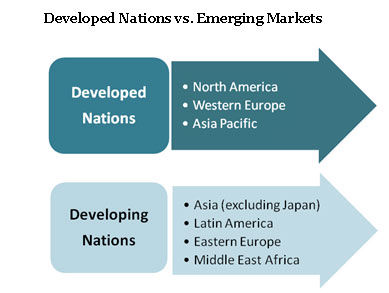 Slow growth for the developed economies:

There is an increasing importance of peripheral nations in the global economy. An IMF report reveals that global economy is predicted to expand by 5.7% annually during the period 2013-2017. Economies of the developed nations grew by a mere 1.3% during 2012, affected by the eurozone crisis. On the contrary, there was a 5.3% growth observed in the emerging economies. While growth in the mature economies is expected to be moderate, emerging markets are likely to catch up soon. Europe, US, and Japan would face a period of slow growth. Imbalances would continue to untangle, and keep the markets in these countries on the edge for the foreseeable future.

The Eurozone recession is expected to deepen in the fourth quarter of 2013 due to an attempt to minimize inventories. Fiscal tightening would ease, putting the inventory reduction to an end. This is expected to bring a gradual growth in the global economy, and help the Euro region to achieve moderate growth. The falling unit labor costs and deleveraging sectors are likely to set the performance of the countries lying in the Eurozone at a slower pace.

Emerging markets hold the key for long term success. They have shown notable results even during tough economic times. Consumers from the emerging countries will quickly grow to dominate the global economy. By the next decade approximately 60% of the population from the emerging countries will have an annual income of more than $20,000. As their incomes rise, consumers will show confidence in their shopping behaviors, and would be willing to spend more. Shopping preferences of these consumers will drive the global demand and innovations in product design, manufacturing, distribution channels, and supply chain practices.

A McKinsey survey states that by 2025 consuming population will be 4.2 billion people. Consumption from the emerging markets will comprise for $30 trillion, which is nearly 50% of the global total. 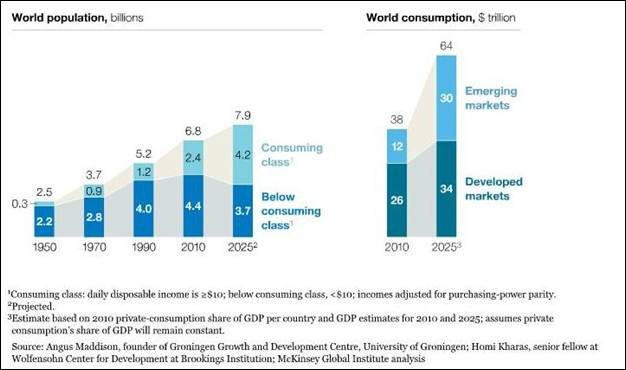 Predictions for 2013 state that the first half would be favorable and growth would be moderate. Asia is anticipated to be the fastest growing emerging region. Analysts predict that Chinas economy will shine in 2013, with a growth rate of above 8%. The countrys currency is poised for an appreciation of around 4.6% in the current year. Sub Saharan Africa is considered to be the second fastest growing region, with strong growth foreseen in Nigeria, and Ghana. However, the country would still experience certain political uncertainties. Latin America enjoys economic and political stability with Venezuela as an exception. In Brazil, investments are surging in. Mexico and Argentina offer significant growth opportunities. 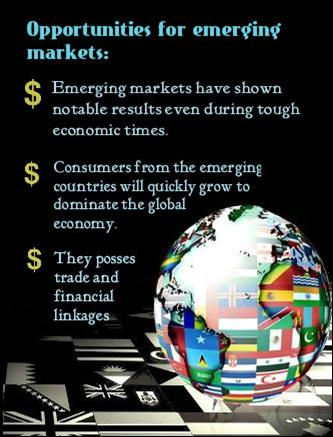 Emerging markets such as Brazil, India, China and Russia have demonstrated resilience during severe economic meltdown, and have bounced back, further poised for a higher growth in the impending years. Other emerging markets such as Eastern Europe, and Latin America suffered more during recession. However, Latin America recovered relatively strongly than Europe. Other countries in MENA, Asia, and Sub-Saharan Africa managed to bring their economies under control through their macro-economic policies, limited public debt, current account surpluses etc. Improved trade and financial linkages enhanced growth in these countries, and also kept them buoyant during economic meltdowns.

Attractions in the emerging markets are obvious; increasing income level of middle class population, few domestic competitors, and abundant resources. However economies in these countries are not an unmixed blessing. They will face challenges that are different from those of advanced economies. They would require handling inflation, capital inflows and risks associated with asset and credit markets. Rapid currency appreciation would also pose a threat. Though China has immense resources, and its population is higher than US or EU, its per capita income is less than one sixth of that of an average US worker. The country also suffers disparity of wealth between city and rural areas.

Are opportunities worth the challenges? 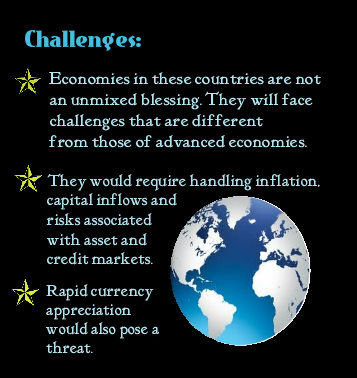 Despite the constraints, opportunities are ample in the emerging markets. Businesses can make money in these countries, provided they enter the market at the right time, utilizing the right opportunities, and posses a right mindset regarding the risks associated therein. Diligence is more important, and shortcuts need to be avoided. The merchandise, service, price, and competitors should be considered along with the distribution system. Companies should enter into the niche market through competitive aspects.

Emerging markets control their own destiny. These countries are gaining strength and prominence, has adequate financial stability, and plays a significant role in global economic supremacy.