Jhabua - A Land of Tribes, an Insight into Silver Jewelry 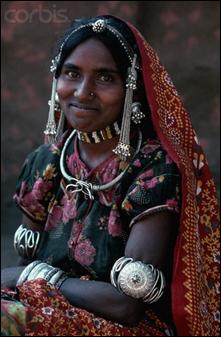 Jhabua is a predominantly tribal district located in the western part of Madhya Pradesh. It is surrounded by Panchamahal and Baroda districts of Gujarat, Banswara district of Rajsthan and Alirajpur, Dhar and Ratlam districts of Madhya Pradesh. This adivasi dominated district situated in hilly area is full of natural resources. The terrain is hilly, undulating typically known as "Jhabua hills topography". The district has an agriculture based economy. Limestone, Dolomite, Calside, etc. minerals are found here. Meghnagar is a developing industrial area of the district. Inhabited by the tenacious and hardworking tribes - the Bhils and Bhilalas, the district is highly drought-prone and degraded waste lands form the face for Jhabua.

Although almost half of the population lives below the poverty line, the tribal still revel in their traditional colorful festivities and continue to make merry on the occasions like "Bhagoriya". The women make lovely ethnic items including bamboo products, doll, bead-jewellery and other items that have for long decorated the living rooms all over the country. The men have since ages adorned "Teer-Kamthi", the bow and arrow, which has been their symbol of chivalry and self defense.

Jewellery of jhabua is a real experience to study about. Carrying from the co-relations with customs, beliefs & rituals, it gives out a platform to draw much inferential data. I found the hard, stiff silver jewellery a mark of the dignity, the culture which people are carrying along with them since ages. Their body art, the silver locks weighing almost in kgs, makes it all a different scene to cover on.

A major custom of the land, which is being carried out since ages is putting the heavy solid silver locks in neck, hands & foot at the time of the birth of a girl &they are not taken out of the girl's body till the time she doesn't die. As the people say, this is a custom which majorly is carried out for the suppression of the gender female, as it has always been a male dominant society. After the female dies the ornaments are taken out of the body & are kept by the family members & forthcoming generations for memory.

At the time of festivals, get together it is supposed to be a very common custom, to offer silver jewellery to each other. Also the boys of the bhils & bhilalas tribes offer heavy silver jewellery to the girl of their choice, if the girl too likes the boy, she accepts the jewellery in front of the whole crowd & they get married just a day after or at times the same day. The dowry system is simply opposite; the acceptance of silver in heavy amount is made by the female. No other thing, not even cash is accepted or given during the matrimony or any other custom. But being a female one has to be overloaded with the solid silver locks from childhood & throughout her life. 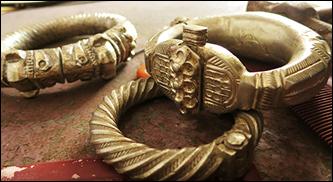 There is a class of people, a group of villages where we see the manufacturing of jewellery. We don't see many variations with the design & forms in the earlier jewellery forms. The locks were simply of a round shape made up of the hard casted solid silver tubular structures & folded as spirals in the end. This is the most common design which was noticed amongst almost all the females even belonging to different areas of the district, but now with the difference of time & a little advancement in production technology in the area, the designs have been modified. The use of silver chains, beads, smaller sizes of ornaments, dome shaped pieces is seen.

These days the high silver jewellery tradition has reduced to an extent as a result of many considerable factors. The major one is poverty, rise of silver price. It is now hard to afford such heavy silver ornaments. As a result the mixing of copper has been started so as to reduce the price & increase the affordability. In some of the areas the jewellery tradition is almost lost because the residential over there are already below poverty line, but a remarkable fact is that every family is still keeping their ancestral silver ornaments & they completely accept the fact that they are always going to be possessed by them even if they die out of hunger. 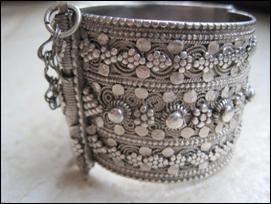 In other few areas the tradition is still at its peak, the exchange of silver bricks & ornaments. The celebration of the festivals is still done the same way, in a collective manner as it was done before. The local dances, street plays in their local language, storytelling sessions by the older generation, all these events give life to the tribal land. In coming years as I see, the silver jewellery tradition is going to reduce. Also there is a threat; it is very unsafe to put on such heavy ornaments as there are hundreds of robbery cases which have come under. Robbers slay women by the neck for the silver locks, which have a very high price in current dates as per cost of pure silver.