Goa is known for its beaches and heritage all over the world, this small state has given birth to craftsmen and artists from all spheres of life. When one speaks about textiles and handicrafts from Goa, the first thing which comes to ones mind is the GODHADI making skill and the KUNBI SAREE. Thanks to our famous fashion designer Mr. Wendell Rodricks this dying fabric of Goa is being revived and put back on the world map.

The Kunbi tribe is believed to be the oldest tribe of Goa. This tribal community is industrious and hard working, with the advent of the Portuguese rule in Goa these people originally Hindus, were converted to Christians. However their culture and rituals have a touch of Hinduism. 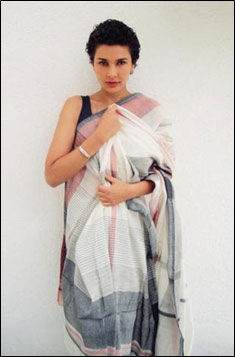 The Kunbi dance is a famous dance with the Kunbi women dancers dancing to the beats wearing brightly colored Kunbi saris. This saree was originally worn by Kunbi and Gawda tribe women who were basically paddy field workers. This community is basically closer to nature. This is the main reason the drape of this saree is simple, the length is just below the knee and gives freedom to the Kunbi workers to carry on with their daily chores and hard field works. Though the saree is not easily available in the market nowadays, these tribal women still adore this drape of saree and prefer wearing it the same way, but using other cotton sarees or even synthetic sarees.

Originally the Kunbi saree was dyed in red and black and woven in small and large checks. The dye was obtained from recipe of iron ore, rice kanji (starch) and vinegar. All this abundantly found in Goa. This saree was originally worn without the choli; however it was worn with a simple blouse having puffed sleeves. The traditional Kunbi women used to adorn herself with simple glass red and green bangles and with strands of black beads necklace.

Although this saree has got its traditional roots and is considered very ethnic, the weave on the saree is simple checkered look, differentiating it to be in the class of geometric designs from the textile designers point of view. The saree is almost extinct in the lights of modernization. As most of the members of the community are moving towards greener pastures, this garment has lost its glory. With the literacy rate being improved in the state of Goa, members of this community prefers to have white collared or government jobs rather than being agriculture producers. 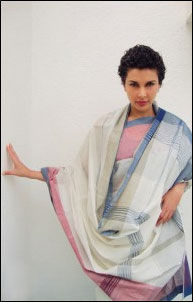 Goa being a equable climate and the tribe engages in hard work that is the main reason the sareee fabric is 100% cotton, the weave is a plain weave with the warps drawn alternatively in groups of ends of colored yarns on the handloom, so that with insertion of the picks again likewise in alternate colored pattern the checks design is obtained. All this is originally was a handloom art. The Kunbi saree is draped by tying in the fabric below the shoulder and a strip of cloth is crossed over the left shoulder and fastened on the back. One of the interesting features of this saree apart from its checkered all over effect is its border. The border varies around an inch to one and a half inch and is patterned closely with brightly red colored warp threads.

The handloom industry has slowly died with the advent of power looms and auto looms. The requirement of raw materials is a costly affair, as the nearest place from Goa to procure yarns is either Kolhapur or Ichalkaranji in Maharashtra or even Coimbatore, Tamilnadu. Handloom weaving is a family affair and with the newer generations finding better and easier means to earn and no longer into this business. Procuring labor from other states again adds up to the cost. However with the keen interest shown by the designer Mr. Wendell Rodricks, this art is taking a new birth. Mr. Wendell Rodricks has designed the Kunbi sari keeping the modern

The saree was originally woven in 4 to 5 yards of length and this is the reason it cannot be worn by todays modern women who prefer the 5-6 yards saree. Mr. Wendell Rodricks has revived the Kunbi saree and given it the modern touch yet retaining the Kunbi sarees tradition.