Angora rabbit hair fibre is a specialty fibre known for its excellent thermal insulation characteristics. Currently, these fibres are blended with wool in production of cold weather clothing and fashion garments. In India, these fibres are produced in very limited quantities and there is an urgent need for improving the production, development of new products and creation of market for these fibres. In this article, we look into the production, characteristics and product development aspects of this luxurious fibre. 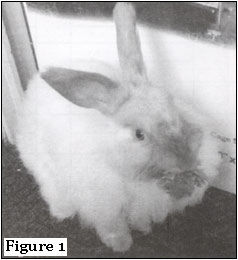 Angora rabbit fibre is one of the finest specialty animal fibres with its well known reputation for fineness, lightness and softness. The Angora rabbit (Oryctolagus cuniculus) is raised solely for its fine and soft hair, unlike other breeds which are reared for their meat and fur (Figure 1). Angora rabbit hair is generally confused with Mohair, which comes from the Angora goat. According to the U.S. Federal Trade Commission, any apparel containing Angora rabbit hair must be labeled as "Angora rabbit hair" on the garment. Today, China is the leading producer in the international Angora fibre market. Germany, France, Chile, Argentina and New Zealand are the other countries involved in Angora rabbit hair production. In India, these rabbits are reared in the states of Himachal Pradesh, Uttarakhand, Jammu and Kashmir, and some north eastern states. The angora rabbits are reared in low temperature zone falling in the temperature range of 5 to 25C. They are generally shorn in every three months. The yield of fibre in different countries varies from 250g to 1200g a year. The price of Angora rabbit hair fibre is around Rs. 2000 per kg. The Central Sheep & Wool Research Institute (CSWRI) under Indian Council of Agricultural Research (ICAR) has its regional station in Garsa, Himachal Pradesh, where different varieties of Rabbits i.e. British, German and Russian are reared. In this article, the production, properties and product development with Angora rabbit hair fibres are discussed in detail.

(2)  Guard hairs: They are 80 mm long. They have rough points that lock together, lie over the down hairs and seal it off.

The down fibres are very smooth, with few cuticles scales. The Angora rabbit produces hairs of several colours, but the strain bred for textile fibres is an albino strain that produces white fibres only. Colored Angora rabbits are raised in India for the manufacture of undyed artisanal fabric with muted colour motifs (Franck, 2001). It is difficult to obtain production figures across the world for Angora rabbit hair as there is no group or association specific to the fibre. Since rabbit hair is produced on small scale farms, actual production figures are difficult to establish, but it is estimated that the world production is around 3000 tons (Vineis et al., 2011). India produces about 100 tons of specialty hair fibres per year (50 ton Angora rabbit hair, 10 ton yak fibre and 40 ton Pashmina wool (Karim and Shakyawar, 2011). The rabbits are generally shorn in every 3 months before the hair starts falling which causes felting. Female rabbits

produce 25 to 30% more hair than the males. More common yields vary between 420 g and 820 g a year in China and up to 1 000 g a year in France and 1200 g a year in Germany. In India, yield varies from 260 - 450 g a year. As rabbit farming in India is completely unorganized and exists in small scale, establishing production figures is in fact difficult. It is necessary to remove dust and vegetable matter from the fleeces before the fibres are sorted, and this is done by grooming. After the removal of this extraneous matter, the hairs do not need scouring before carding.

After grooming, the fibres are sorted into 4 grades, namely

The fibres are very fine and fairly regular in diameter. The mean fibre diameter of angora down fibres is around 12 to 14 m and the fibre length is up to 60 mm. The density of the fibre is 1.14 g/cm3, and hence lighter than wool (density: 1.33 g/cm3). The Angora rabbit hair is considered to be the easiest fibre to identify under microscope than other specialty fibres. The scale profile of a fine down hair is shown in Figure 2 (Onal et al., 2007). The fibre is oval to rectangular in cross section and has a ladder type medulla. Fine fibres show a uniserial ladder-type medulla, but this became multi-serial in the coarser hairs. The hairs are all medullated (hollow) which decreases their weight by nearly 20% when compared to wool and also increases their insulating properties. The cuticle cells are thin and very typical, showing a single or double chevron pattern on the fibre surface (See Figure 2) which becomes almost coronal at the extreme tip. A number of works have been reported on differentiation of wool and other specialty fibres like cashmere, alpaca and angora (Langley and Kennedy, 1981; Vineis et al., 2011).

The fibre is very fine and smooth. This makes it difficult to spin. There is a constant risk of fibre shedding as there is lack of fibre to fibre friction. This can be overcome to some extent by imparting twist to the fibres during spinning and the length of the fibres assist in making a coherent strand of yarn. The fibre is usually blended with other fibres such as fine wool, often with a small proportion of nylon and spun on the woollen system. Mishra and Goel (2004) studied the production of Angora rabbit hair and merino wool

blends. The evenness of yarn decreased with increasing proportion of Angora rabbit hair. Pure Angora rabbit yarn showed more neps and other irregularities compared to that of merino wool (pure merino wool yarn). They concluded that a blend of 35:65 of rabbit hair and merino wool was found to be best for preparing woven or knitted fabric because of better performance, aesthetic appearance and low cost.

Chattopadhyay and Ahmed (2006) studied the blending of Angora rabbit hair with cotton fibres. Angora rabbit hair was blended with Suvin and DCH 32 varieties of cotton and spun to 40s count yarn suitable for production of knitted garments. It was reported that with rabbit hair content up to 30% in the blend, it was possible to spin yarn suitable for weaving. The tertiary blend of cotton, rabbit hair and polyester fibres with equal proportions, produced knitted fabric having better bursting strength and lower shrinkage parameters. The production of T-shirts with a 30s count yarn in the blend ratio of 70:30 cotton/angora was reported. The soft feel and low shrink properties of Cotton and Angora rabbit hair blended knitted fabrics were found suitable for women's innerwear and children's wear. Oglakcioglu et al. (2008) studied the thermal comfort properties of cotton/angora rabbit hair blended knitted fabrics. The percentage content of Angora fibre varied from 5-25%. Results showed that at least 25% of Angora fibers need to be added in the blend to achieve better thermal comfort properties.

Some of the commercial blends of angora knitting yarns are:

Angora rabbit hair has excellent lustre, warmth retaining properties and flexibility, which makes it an ideal fibre for textile end uses. However, since it has little scales and crimps in comparison to other animal fibres, spinnability is very poor and it is difficult to produce a fine spun yarn. Hence, spinning a 100% Angora rabbit hair yarn requires modification of fibre surface to introduce crimps or roughness to the surface.

A U.S Patent (Yun, 1993) describes a process for making 100% angora fibre yarn. A mixture of hydrogen" peroxide, Sodium hypochlorite, bleaching agent and silicone were mixed and dissolved in cold water. The solution was maintained at a temperature of 1 0-12C. The rabbit hair fibres were then immersed in this bath for about 50 min. The chemical treatment dissolved and removed the core muscle from the rabbit hair, thus making the fibre pliable. It was reported that 5 to 8 crimps were generated in this process. The treated angora fibres were washed, and then a softening agent and an antistatic agent were applied to prepare a grey yarn for spinning.

The National Institute of Design (NID) in collaboration with Institute for Plasma Research (IPR) developed a prototype plant for atmospheric pressure plasma processing for Angora Wool Uhala et al., 2009). Plasma was used to etch the fibre surface so that the inter-fibre friction was improved. The treated fibres were then machine spun and also hand spun into yarns. Products such as Stole, Shawl, Scarf, Cap, Sweater, and Ponchos were developed. It was found that the plasma treatment also improves the wettability and dye uptake of fibres. In the same article, designing of high altitude clothing using plasma treated angora fibres was also reported. The angora fabric can be used as a middle layer in the multilayer clothing worn by soldiers, thereby providing the necessary warmth to the body by insulating from the extreme cold outside environment. In another study, Jhala and Gandhi (2009) found that the friction coefficient showed an increase from 0.18 to 0.33 by plasma treatment. Such an increase in friction is considered necessary for improving the mechanical processing of Angora rabbit hair fibres.

Angora rabbit hair fibres are specialty fibres with enormous commercial value. These fibres possess excellent thermal characteristics and hence provide the necessary comfort in cold weather clothing. In India, these fibres are not much exploited and their production is limited to small scale sector only. There is a tremendous scope for export of this fibre and its product to other countries. On blending with wool or cotton, Angora rabbit hair fibres improve the handle and thermal comfort properties of the garments. Innovative blends of these fibres with wool; cotton and other fibres need to be explored to produce value added products with improved functional characteristics. The production of 100% Angora rabbit hair yarn with improved yarn quality characteristics at an acceptable process cost is still a challenge for the spinners. Modification of fibre surface by chemical treatments/ plasma treatment or by any other means is essential for improving the spinnability of this fibre. The breeding of Angora rabbits and production of rabbit hair fibres offers tremendous potential for the development of small-scale businesses and can generate income for rural people, especially for women.

This article was originally published in the Textile Review magazine, May, 2013 issue, published by Saket Projects Limited, Ahmedabad.