Cartoons Enter the Segment of High-Fashion Apparel for Grown-Ups

Last year, leading high-fashion retail chains Mango and Zara were in for a surprise in India. Among their top sellers were premium T-shirts featuring popular cartoon character Mickey Mouse meant for grown-ups.

Encouraged by the response the one-off experiment met with, Disney Consumer Products the retail and merchandise arm of Disney UTV, is rolling out high-fashion branded apparel meant for adults featuring Mickey, Minnie and other famous cartoons. 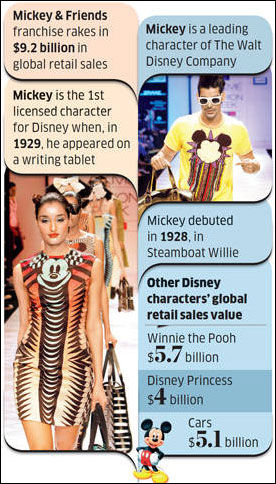 Disney hopes the move will help it broad base its consumer base, which is now heavily child-centric, boosting sales and profit margins with the introduction of higher margin products.

In India, the company hopes that adult-targeted products will contribute to 40% of sales within two years, said Roshni Bakshi, managing director, licensing and retail, at Disney UTV.

Earlier this year, Disney tied up with real estate firm Supertech to cash in on demand for branded interiors to launch Disney-themed decor in Delhi-NCR. Mickey and other characters feature on furniture, rugs, tableware, kitchenware, fans, paints, swimming pool and play zones in these homes. Disney has similar tie-ups with two other real estate players in Mumbai and Kolkata.

"We are creating a new environment for brand licensing," Bakshi said. "We have compelling characters that sit under Disney and Marvel brands. We are constantly looking at opportunities that will connect our brand with consumers," she added.

The company said in markets such as the US, China and Europe, categories across apparel, footwear, sleepwear and accessories featuring Disney characters contribute close to half of its sales on average, while in Japan up to 60% consumers of Disney products are adults. Most products are launched through collaboration with designers, licensees, manufacturers and retailers.

In India, the firm has inked tie-ups to retail its Disney and Marvel T-shirts, scarves and watches for adults with leading stores including Lifestyle, Planet M, Globus and Cotton World. To cash in on the growth of online shopping, the firm has tied up with Zovi.com and Myntra.com. The products feature characters such as Mickey, Minnie, Donald, Goofy and Marvel super heroes including Iron Man, Spider-Man, The Avengers and Hulk.

The firm said, overall, Mickey & Friends products including apparel, footwear, sunglasses, watches, tableware, wall decor, fans, bed linen, books, toys and stationery sell in close to 5,000-plus stores in the country. Company officials said the Mickey & Friends franchise rakes in $9.2 billion in global retail sales, and is the leading character of The Walt Disney Company. The kids market in the country is growing at a rate of around 30%.