Spinning and Weaving in the Doukhobor Community 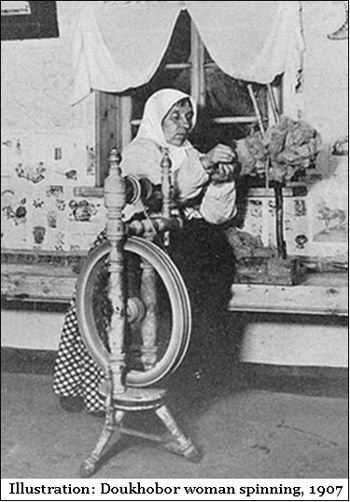 The Doukhobor were and in many respects still are, a religious community, originally from Russia, who fled persecution to find a new life in Canada in the very late nineteenth and early twentieth centuries.

Textiles were always seen as being an important and fundamental part of the community's life. There was an emphasis on many aspects of domestic textile craft from spinning and weaving to rug making, embroidery, quilting and even knit and crochet. Design, decoration, and interpretation of textile skills owed a heavy debt to the influences of their original Russian roots. The memory of these skills and influences were brought to Canada by the Doukhobor women, and once settled and with the kind donations of neighbours and Quaker communities of initial spinning and weaving supplies, as many had left Russia with little or no belongings, work soon began on rudimentary weaving production.

Weaving and spinning skills quickly expanded and when many of the Doukhobor community moved from their initial homes in Saskatchewan and Manitoba to a new home in British Columbia, flax and hemp harvesting allowed then to add another process into the weaving mix. This meant that the community could self-sufficiently weave linen fabric for the summer and wool, which was imported from the remaining Doukhobor communities in Saskatchewan, for the winter months. 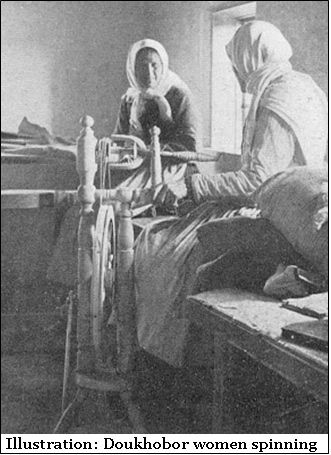 All girls from an early age were taught the skills of both spinning and weaving, along with a number of the other textile-based crafts, and all were meant to be competent and proficient in these tasks. Craft skills were deemed an important and vital element of the community as they were seen to be part of the long tradition that had been brought from Russia by the original Doukhobor immigrants. While the community was well aware that they were part of a new country with new ideals and standards, they were still keen to maintain a certain element of continuity, the transference of textile crafts from one generation to another was seen as a vital tool in this belief.

However, there was probably a more fundamental need to perpetuate hand production of craft skills in a country where machine production was now the norm. It was the connection with the land that was seen as the real underlying necessity that tied the community together. The Doukhobor were essentially part of a rural farming community tradition and that is where their strength and identity lay. Interestingly weaving production tended to be limited to the winter months when work on the land was usually at its most minimum. 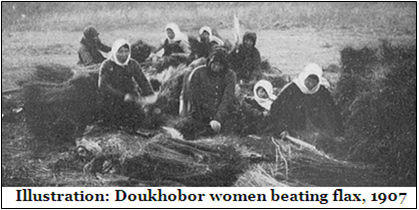 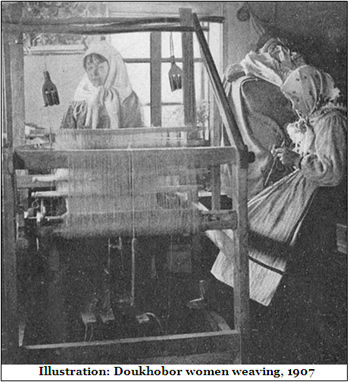 In many respects the Doukhobor lived the life that was idealised by many of the Arts & Crafts movements of Europe including that of Russia. Many saw the need for a fundamental shift away from towns and cities that were associated with the ideals of industry, mass production, and slave wages, to that of a basically communist inspired rural life of small communities that shared both responsibilities and material wealth. It was felt that, as far as possible, these communities should be self-sufficient, self-determining, and independent from the state. To a certain extent, it could be said that a number of elements of the early Canadian Doukhobor communities coincided with the Russian Arts & Crafts movement and particularly that of Tolstoy and his ideas concerning community, nature, and spirituality.

Unfortunately, many of the textile skills perpetuated by the Doukhobor are no longer practised. However, there are contemporary custodians of the history of craft production and skills of this remarkable community and a number have an online presence.