The Embroidery Work of Herta Koch

Herta Koch produced a range of textile work, much of it during the early years of the twentieth century. Her embroidery work was particularly innovative and vibrant with a preponderance of stylised flora and fauna. In many respects, her work can be likened to English Jacobean embroidery as well as the floral inspired traditional embroidery work of Central and Eastern Europe. This perhaps gives us some indication as to the breadth of inspiration that one creative individual can engender.

Koch tended to deal in overly large flora and fauna, which obviously gave the impression of vibrancy, colour and luxuriance. In the first illustration 'Troubadour' the two human figures are completely surrounded by oversized vegetation and bird life. Although the largest figures they do not seem to overly dominate the composition and it cannot perhaps be a coincidence that they have a more than tenuous link with the Adam and Eve in the Garden of Eden story. 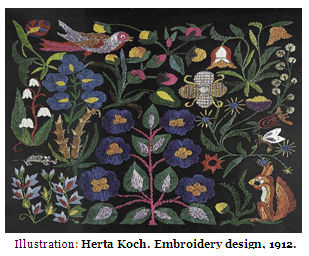 Koch's work is consistent in its use of nature as a main ingredient to her compositions and in the use of overly large and somewhat stylised motif work. The same can be seen in much of her printed textile work, an article at a later date will be posted on this subject. By drawing inspiration from a number of origins, Koch was able to meld them together in order to arrive at a point where she was producing individualised creative work that no longer felt as if directly representative of that origin, which is the path that all creative people follow.

It is always interesting to see a creative individual take observational starting points, and then to see those points become folded in on themselves, repositioned, even reimagined and then projected back on to their own contemporary audience as new and vibrant pieces of work. Creativity has so many of these lines of inspiration, no more so than in embroidery. Generation after generation produce new reference points of inspiration, many of which have been influenced by the work of previous generations. This ongoing procedure has an accumulative affect, whereby, as the generations pass by, compositional pieces can be seen more as a complexity of past ideas and technical skills, all overlapping, and indeed underlapping each other. 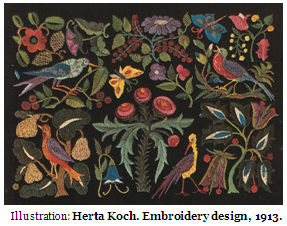 It is rare, and you would have to conjecture, near impossible, for a creative individual not to be influenced on some level by those who went before them. It is in the nature of creativity to be generational, with each new generation adding something extra to the vocabulary of either singular or multi-disciplinary work. In some respects, without trying to sound too trite, the building up of the discipline of embroidery for example, is done by each individual at each generational level, producing one representative additional stitch at a time.

Work such as Koch's, which are lucky enough to be tagged with her name, as well as all of the countless unnamed embroideries produced over seemingly endless generations, which she would have used on an inspirational level, increase the availability of new inspirational points for our own generation. As we perhaps use her work as an available inspirational point, our own work will one day perhaps inspire future generations in which to use as available starting points for their own new and original work, and so it goes on. 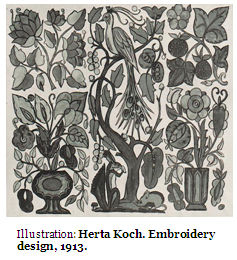 This is always, for me, the beauty of creative work. It can by all means stand on its own as a unique focused point of one person's individuality and their unique perspective on the world they inhabit. However, it can also be one point in a continuing journey of a discipline, and their work can be a flavour and reflection of all those individuals who went before them and perhaps a foretaste of all those that will follow. As a creative individual, you are the accumulation of an endless parade of trial and error, experimentation and perseverance, acute observation and sometimes sheer luck, that you can pass that accumulated history on to the next generation is perhaps the greatest gift of all.