The Embroidered Border and Talk of Experience and Creativity

Borders have always been a great form of creativity for textile pattern and decoration enthusiasts. Whether it be constructed or printed, the border has given an extra dimension to textile pieces, be it costume, personal or domestic. This is particularly so with embellishment, through either embroidery proper or appliqu. It is embroidery that was often specifically chosen as a finishing touch to an outfit or domestic textile piece. 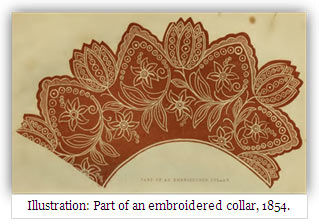 Appreciating the technical skill that produces the visual power that an embellished edge can have, the four pieces that are illustrated in this article all come from the 1850s. There is no particular reason for this apart from the fact that coming across them recently one can only admire the decoration. The point being that embellished decorative borders can more or less come from any corner of the planet, from any culture and from any era, including our own present contemporary one. 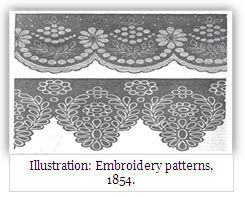 time and only a snapshot of a continual creative journey, one that has taken us from our very earliest scrapings on rock or bone, to where we are today with millions of individuals producing their own unique creative work, following their own creative journey, in any number of disciplines and with an infinite variety of materials.

So in many respects, one piece of embroidery work can never really be seen fully without the context of its culture and time. However, on the other hand sometimes it can do us good to stop for a moment and just stare. Anyone can admire and revel in the power of pattern and decoration, or be enthralled with the technical skill and dexterity of one decorative piece without knowing anything about the specific culture, individual or time frame.

In this way, it can be like looking at something for the first time, like the wonder that comes from the experience of a child as they view a place or object for the first time. We sometimes want to know too much about a thing, where was it made, how it was made, its age, geographical provenance, even its name if it has one. Often, in the grand scheme of things it doesn't really matter. What does matter ultimately is the sensory experience. If an embroidered border made you use more than one of your senses, then it perhaps has done its job.

This article is about how embroidery borders were used to deliberately enhance an item, to make it seem somehow more precious, attractive, and desirable even, but textile embellishment seems so much more than that. Embroidery was often imbued with spiritual significance with pattern work projecting, through symbolism, ways to protect or enhance the individual and through them the community. 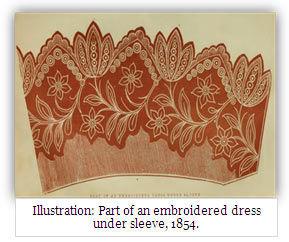 However, it was also about the individual maker, most of who were and still are, unknown. Whether that individual maker followed a set pattern as in the illustrations shown, or followed a cultural pattern through the copying, generation after generation of a set style that identified a community, or expanded into the world of unique creativity following a path that no one had set out beforehand, it is the hand and the eye, the needle and the thread, the creative and the experience that are paramount. Whether we see a decorative piece in its historical moment, whether we know its technical details, whether we even know the individual maker, or not, what is really important?

It is the moment of first experience to see a creative life as being made up of a seemingly endless display of first experiences. In the manmade world these can be anything from the pattern on a manhole cover, a torn fragment of patterned textile, a selection of decorative buttons, a crocheted blanket, or indeed an embroidered border, the list is really endless. As far as the natural world is concerned, the list may well be even longer and the experience more profound, whether it be the dappling shadow of leaves, the buzzing of insects, the sound of a birds wings as it makes its way across your field of vision, or the crashing of the ocean waves as they crash along the shore.

We are constantly looking, examining, and describing objects and themes to ourselves, whether in the artificial or natural world. In that respect, an embroidered piece of embellishment becomes another experience, something to suck into the psyche to perhaps use creatively at some point in the future.

Although our contemporary world of instant picture access such as Instagram, and our seemingly endless picture corralling at Pinterest and Tumblr are often criticised by those who see the end of civilization in site, this is what creative people have been doing for generations, collating and banking visual experiences inside their heads, that the rest of the world is now seeing the relevance of using your eyes to see the world more clearly and more holistically, can only ever be a good thing.