The Muslim fashion is slightly different from the global fashion trends. While the global fashion trends can be anything from demure to bold, the trends that the Muslim couture involve are mostly subtle and modest. The market for Muslim couture is vast, as the world Muslim population becomes aware of the fashion that helps it stay chic even with traditional attire. The growth and expansion of the Muslim middle class and their penetration into Western society are making them more dress and fashion conscious. 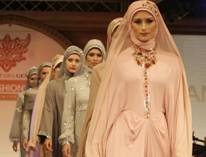 In Europe alone, the annual sales of Muslim clothing have now reached US $ 1.5 billion. As per a recent study by Bloomberg which was undertaken to figure out how big Muslim fashion market is and it was revealed it was $ 96 billion, globally, estimating that 50 per cent of the world's 1.6 billion Muslims each spend at least $ 120 a year on modest clothing. The big brands have witnessed a drop in the normal fashion market, which has encouraged them to tap the Muslim fashion world. It is much easier to find long-sleeved dresses under the prestigious fashion banners, as the idea here is to target the Muslim fashion world.

The Muslim fashion is still a fresh concept, but countries like Thailand and Indonesia are exploring the possibilities of promoting this concept at global level. These countries are promoting the products in Europe, as the Muslim population in Europe is more than 34 million. Indonesia is focusing on Europe as important future export destination, which will help the country to become Muslim fashion industry's hub by 2020. The market for the Muslim couture in other countries like America is also growing, though the clothing style is a little more relaxed here.

With growing participation of Muslim men and women in enormous events like Olympics, it is required to make necessary changes to the wardrobe of the participants bearing in mind the modesty in attire promoted by the community. There are sports friendly headscarves, loose-fitted trousers and full-sleeved t-shirts along with jackets. The outfits are available in various ranges like watersports, casual and exclusive.

The hats are also stylish that are made in several colours and the fabric used is both comfortable and elegant. Scarves are also available in different fabrics and colours. The classic Jellabiya for men is made in a customized style with comfortable and modest fit. The hijabs are also available in various attractive styles and the modern Muslim women can wear it as per her face shape. Long, loose-fitted trousers and full-sleeved shirts in fine fabric, along with, long coats are available for working Muslim women. Long skirts and with formal shirts are also a part of the modest clothing these days. Some Arabic style outfits can sell for as much as $ 10,000, but still are in high demand due to the robust economies of key markets such as the UAE. Today the influence of 'modest' fashion trends can be spotted influencing street fashion. This proves the strength of the emerging niche of the Muslim fashion world.

High-end designing houses like Hermes and Gucci are also trying to break into the Muslim market with scarves and other products. A diamond studded Abbaya, which is traditional Islamic attire was released this year in March and this outfit was declared as the most expensive dress in the world, which was sold at $17m. There are two thousand stones in this Abbaya, which include fifty 2-carat white diamonds, fifty 2-carat black diamonds, 1,899 pointer diamonds and the one beautiful red diamond. The red diamond used is a natural SL2 clarity and has a value of $7.4 million. The Muslim fashion world is expanding now and the fashion industry is eyeing on earning profits through this modest couture. If the focus is shifted only to women, the Muslim women comprise of 800 million of the world population and 40 percent or 320 million women fall in the age group of 25-years-old, which is the spending group.

Unlike, the past when there was nothing much to explore in the traditional Islamic wear, today, everything from the way it is tied and accessorized, to the poise and demeanour of the wearer, is laden with meaning and style. From a simple head covering, it has become, in the past ten years, a delicately designed garment and highly marketable product, expressing the challenge of a new class of modern Muslims. In recent years, the fashion industry has noticed an increasing growth and shift in fashion trend for Arabian inspired embellishments and couture. And this trend is here to stay.

While, the fashion inspired by Islam is not like the couture of Paris or Milan, but it is definitely very inspiring, which explains why the international designing houses are dabbling with the idea of launching exclusive range for the Muslim customers.

The style of modern Muslim youth is evolving. It comprises of culture and trend, which is what the designers all over the world are including in their designs. The Muslim couture is about sharing with the world how beautifully traditional fashion wear can be modified as per present times. The designers are creating styles to address the needs of Muslim women who are looking for a garment that covers them from neck to ankle in a fashionable way. It is definitely encouraging wardrobe makeover of Muslim youth as per the changing times and without compromising on the modesty.