Indian art lives from about the 3rd millennium BC to the modern times. People, in India are not aware of most of the art forms as they are too vast. This vast area of cultured art is being divided into states, communities above 600, districts, dialects, tribes which are the main reasons to this rich diversity in art forms. Though these art traditions are a lot in number, many of them are in an extinct stage and few don't exist. Each form has its own aesthetics and elegance. There are very few people who have the concern towards the art forms, and they come up with great plans amongst which quite a few are breathtaking.

This study focuses on the development of these art forms and their impact on the fashion industry. Fashion, as mentioned earlier has played a major role in not only bringing the art to limelight but also has ultimately made the art live. Following examples would speak about few of the many traditional folk art forms of India, their growth, development, and their contemporary life and how are they being manipulated by the fashion industry, with its originality in place.

Most of our folk art traditions are at the verge of becoming extinct. But still, there are resources to help them out. Fashion is a major platform that has given folk art its due recognition through its creativity yet retaining its originality. The reason for conducting this research is to study how the fashion industry has adapted the various Indian folk art traditions and the consumer behavior towards it.

•  To study the impact of Indian folk art in contemporary fashion.

•  To study consumer acceptance in the Indian market.

Four well known traditional folk art forms are taken and are being researched on the basis of history, development of the art, its contemporary status and also about the designers of the fashion field their implementation of the art forms in their collections as their contribution towards the art. Data collections have been made which are from reliable sources. Data's can be categorized into two forms.

Data has been collected from people through direct conversation, using in-depth interviews as a tool for data collection. Quantitative data was collected using a survey on seventy respondents.

Data have been collected from internet sources, articles, newspapers (The Hindu, Times of India), news websites (Fibre2Fashion), individual websites and reviews from social networking sites such as facebook and twitter.

Warli entering the fashion field was a revelation to the art itself. Designers were inspired by the simplicity of the art and have tried to implement them into todays fashion. Everything about Warli is earthy and soothing. They have the aptitude to create the nostalgia. They can make you feel the smell of the wet soil. These even today succeed in adding elegance to a rural hut or a five star hotel interior with the same charm. Today, one can see the art as a wall hanging, as home decor, as a garment, as a toy and still more.

Today, many designers are inspired by charm of our traditional folk art style. Methods like tie-n-dye; block prints are few of the lot which makes Indian fashion across the world. Shruti Kothari (anti-fits) tells us about the way you ride on this trend using the famous Warli paintings.

The simple motif of stick figures on a structured tunic adds just that element missing. A black skirt with white sticks on it is shockingly seen on western wear and not on Indian wear. This season's new release would be anti-fits, a rebellious trend defying the norms of regular fashion. These outfits were ideal for Indian women because it covers all the parts of the body. These outfits had Warli prints on them giving an exotic Indian appeal.

But over the decades we very well know that the weight is becoming less. Today, the sari is combined with uparas to give it a soft and sensual feel without losing its appeal. One of India's foremost designers Ritu Kumar has developed a unique style of her own, reflecting the Indian tradition of craftsmanship on a contemporary scale. Since she had an art history and musicology background, her understanding of ancient designs and incorporating then into the contemporary world has created a new classicism. She holds between traditionalism and modernity.

Her works today has reached a level beyond revival, where it is constantly evolving within the tradition that is sophisticated both in the eastern and western sense, with each of her collections making a contemporary statement. In many aspects, block printing using wooden blocks in India, has changed very little till date (contemporary block printing, 2012). Craftsmen sourced seasonal teakwood and used special techniques and steel chisels to carve intricate designs into the wood to create the block.

This is then soaked in olive or mustard oil for several days to soften the wood and prevent it from becoming warped. Although the methods of producing and carving wooden stamps have remained the same over the period of textile history, coloricious
has developed the industry by adapting their own designs to modern demands. While ethnic designs, such as paisley patterns, are still widely available, they have expanded traditional ranges to include more contemporary designs, such as art nouveau and art deco blocks. This provides exciting variation in the different conceptual possibilities available using just a simple wooden block and some paint.

Though traditionally craftsmen used natural vegetable dyes to print onto fabrics there is now an astonishing variety of fabric paints which can be used by the creative textile artist to print their own fabric using wooden stamps. The simplicity of this ancient and highly simple technique can be adapted and updated by craft goods which are widely available. Each region has its traditional distinct design elements with unique color schemes and motifs. There are many fashion designers who have taken the block printing as their major lead and have succeeded in the fashion industry.

Initially, there was no sense of what constituted Indian fashion or what should constitute. Even in Bengal, one can see men wearing a dhoti with a waistcoat or tie. It was a complete potpourri and street fashion as a there was no concept or reason behind it. It was drawn to what was original in our culture because Ritu Kumar believed in the richness of Indian textiles. But the initial results were far from encouragement. People thought that block printed designs looked like bed covers and they were perhaps right. Over a period of time Ritu's aesthetics were given a chance.

Data Collection: In-depth interviews were conducted with experts from prominent academic institutes and the findings have been summarized in the table as given below: 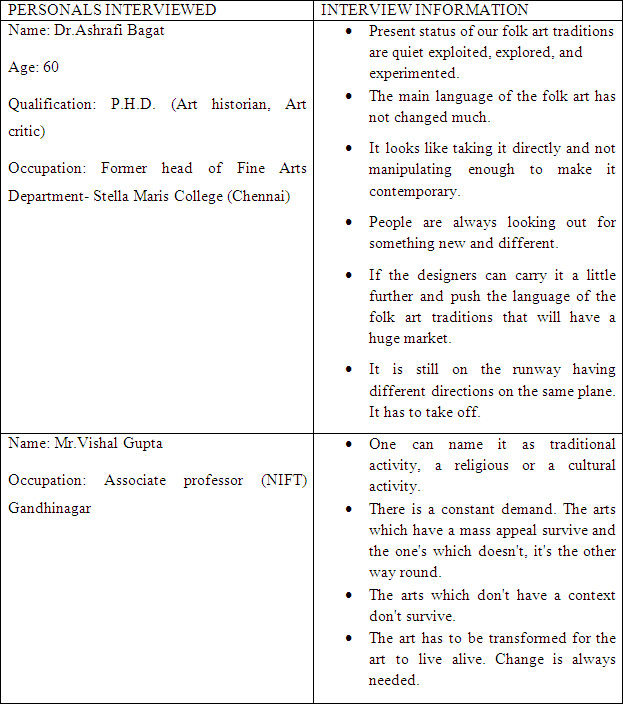 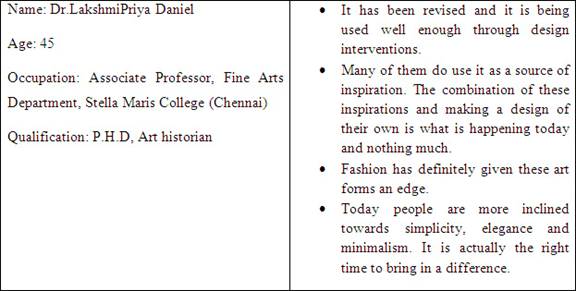 For a quantitative research, the respondents are categorized into 4 distinct categories. The sample size is 70.

•  Consumers who are concerned about fashion category 2

•  Consumers who have a background in the field category 3

•  Consumers who are well versed in the field category 4

Though all of them are considered as common consumers, the way each category people react towards this topic was different. Hence, the analysis was even more precised and ideal. 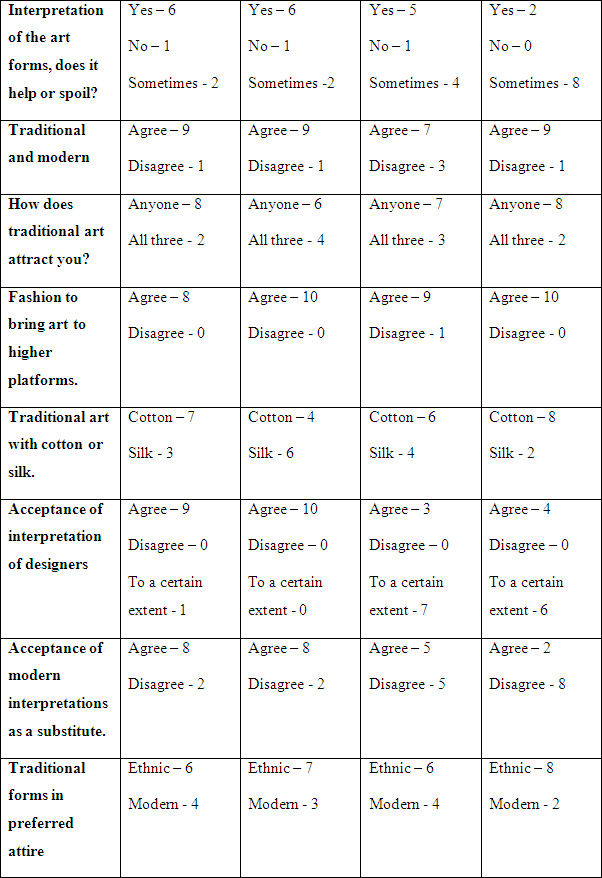 To make the consumer accept truth and satisfy them with something that does not belong to this era is no joke. Consumers are the ones who are not easily satisfied in terms of fashion. They have strong tastes and preferences. Keeping this in mind, the designers maintain a thin line connecting both the eras, and not overdoing either of them. This was one of the major reasons as to why consumers are willing to accept the difference created in the traditional art. Art proves a point that even a 3000 thousand year old art form can still hang in a five star hotel, which shows that the art can merge with any time period. Hence, one can say that the traditional folk art forms will not have an end, if it keeps having a helping hand to pull it out, whenever it starts fading.

But the helping hand always can't be the same. It has become very monotonous for the consumers as they keep looking at these art forms on the same pace and plane. There has to be a takeoff somewhere. Otherwise, what helped art itself will pull it to down. Now it's time for a change to occur. Though people are buying what is upcoming as fashion, they are now very much looking forward for a difference in our ethnicity.