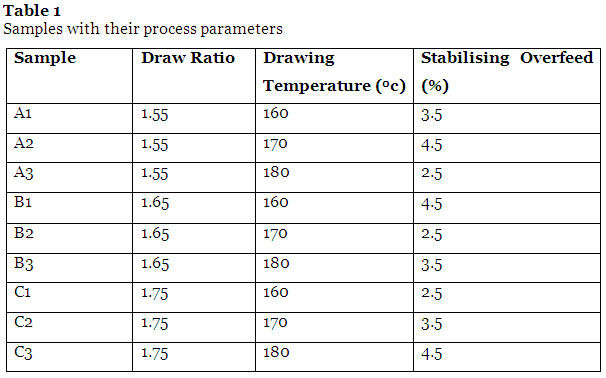 The material used in this study was PET partially oriented yarn of 250/48D. Tensile strength of material was found 528gf with breaking elongation of 78.18 per cent.

Linear density of the drawn yarns was tested by using ASTM standards 1907-07, on the metric wrap reel.

Mechanical properties of the oriented materials were measured at room temperature. The samples were tested on an Instron tensile tester. The results obtained were expressed in terms of tensile strength and breaking elongation.

Shrinkage refers to the decrease in length of specimen when it is placed in a hot environment. Here the produced polyester samples were placed in hot air for a specific period of time and the shrinkage percentage is calculated over the change in length due to hot air.

Densities of produced samples were determined by using flotation technique and then crystallinity was calculated. The volume fraction crystallinities percentage of yarn was estimated from densities of sample using following expression.

Where p, pa, pc, are densities of sample standard amorphous and standard crystalline phase respectively. The values for pa and pc are given below.

Physical properties and structural characteristics of yarns were summarised in Table 2.

Physical and some structural properties characteristics of yarns 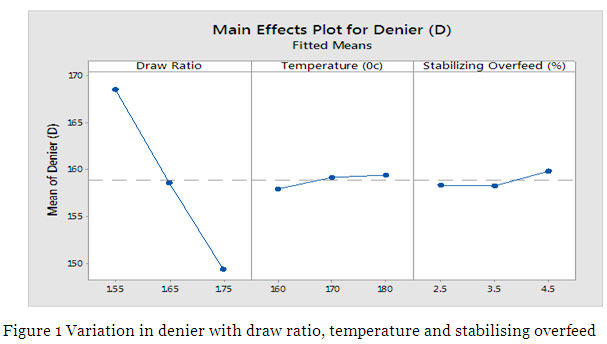 Micro fibrils arranged into fibrils of filament length are proportional to draw ratio. The deformation in the structure is caused by sliding of fibril while drawing. As draw ratio increases, volume fraction of micro fibrils decreases. The increase in fibre strength on drawing increases as a result of transformation of micro fibrils into extended chain interfibrillar molecules. The increase of the strength with draw ratio is possibly due to the increase of molecular orientation. Same trend of increase of strength of filament with increase in temperature from 160 to 180c due to drawing at high temperature builds up a crystal structure giving the fibre high tenacity. The elongation values increase as stabilising overfeed increases. Due to relaxation, tension on filament decreases on extended chain molecules and we get more elongation. 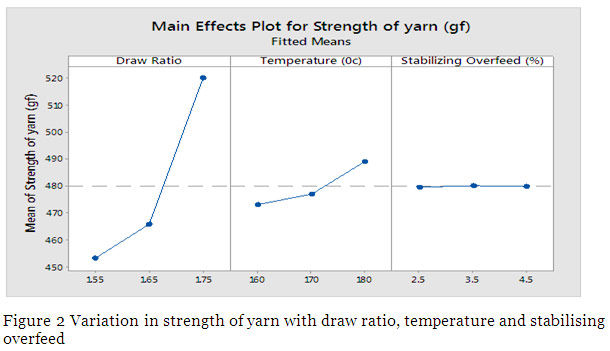 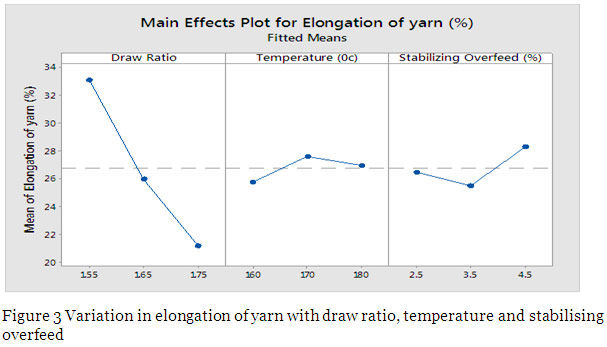 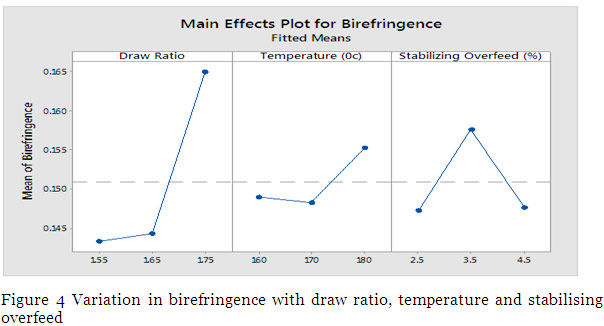 Density of samples is measured and crystalline fraction is calculated. Drawing as expected, increases bulk density of filaments. Also it is seen that increase in stabilising overfeed percentage decreases density crystallinity percentage. In case of polyester, the chains contain bulky benzene rings in main chain which prevent chains from attaining lowest state of energy level. As drawing proceeds, the chains pack up in an orderly way and in such a manner so that the energy associated with them decreases. Thus, more crystallinity seen at 2.5 percentage and decreases with increase in stabilising overfeed percentage.

It was seen that shrinkage decreases with increase in draw ratio. In case of polyester, the chains contain bulky benzene rings in main chain which prevent chains from attaining lowest state of energy level. As the drawing proceeds, the chains pack up in an orderly way so that the energy associated with them decreases. This helps in release of internal stresses, lowering shrinkage values. At higher draw ratio, higher orientation is produced. Shrinkage was increased at lower drawing speed and at low draw ratio. It was observed that a direct relationship exists between shrinkage and filament denier i.e., with the increase in the denier, shrinkage increases and vice versa.

It seems that increasing drawing temperature, shrinkage values decreases. This may be due to high temperature values that make the perfect crystal formation. It was also seen that increase in stabilising overfeed increases shrinkage. This is because overfeed increases molecular relaxation. Because of overfeed, the chains pack in disturbed positions and at lowest energy by reducing tension. This causes internal stress in chains once again because of disturbed position and secondly because of immobility of bulky groups. Thus, increase in internal stress causes increase in hot air shrinkage. 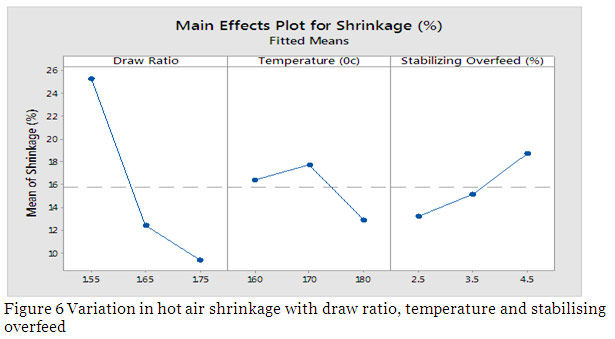 The authors are thankful to the management of DKTES Textile & Engineering Institute, Ichalkaranji and DKTES Center of Excellence in Nonwoven for giving permission for testing and carrying out this work. The authors are also thankful to Welspun Syntex Ltd, Mumbai and Sandeep Ostwal, Vice President, Welspun Syntex Ltd Mumbai for supplying polyester and for his guidance.