'Approval procedures need to be swift'

Improvisation of infrastructure, reforming labour laws, investing in a skilled labour force, implementing the Goods and Services Tax (GST) and most importantly, speedy approvals are some of the measures that domestic brands feel are required for the 'Make in India' initiative to be a success, reports Manisha Almadi Midha. 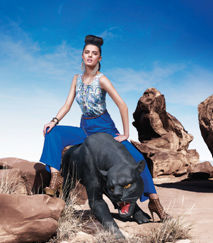 The 'Make in India' campaign was launched by the Narendra Modi government for 25 sectors, including the textiles and apparel industry. It focuses on transforming India into a global manufacturing hub by encouraging brands to manufacture in India. The campaign also hopes to attract capital and technological investment into the country, thus spurring GDP growth. While some domestic brands share their views on the campaign, global ones completely shy away from participation. Some say that being MNCs they cannot comment on 'Make in India', while others are wary of sharing their feedback on a government policy as it might affect their stake in the market. Fibre2Fashion did a wrap-up of two domestic brands that came forward: Fusion Beats and Riot.

Fusion Beats is a womenswear brand, Western in look but Indian in spirit. It is an amalgamation of ethnic and western wear. 109°F, on the other hand, is a women's fashion brand offering westernwear. These brands were launched in 2012 by Mumbai-based Creative Lifestyle.

Riot is a casualwear brand for the youth, launched in 2010. "The name was chosen not for its meaning, but for its connotation. Our idea was to exude a rebellious nature as seen in young adults whom we target. Our store (slightly rough and funky), along with our tagline 'Your Life, Your Rules' conveys the same theme. We aspire to grow and become one of the well-known brands of India which the young people would want to identify with," explains Animesh Maheshwari, VP- Riot, the retail venture of Mumbai-based Suditi Industries. The philosophy of Riot is to be innovative and constantly strive for contemporary fashion with fine quality and finishes for various categories. "Our USP lies in offering latest trends at reasonable costs," says Maheshwari.

According to Radhesh Kagzi, president of Creative Lifestyle, their manufacturing unit helps them produce the best styles as per international standards, hence enabling people to create their own style statements. "Besides, we launch new collections every season which are both contemporary and complement every body type," says Kagzi.

Fusion Beats and 109°F stores are present all over the country as well as overseas in the UAE, Kuwait, Saudi Arabia, Nepal, Sri Lanka, Australia, Ecuador and Kurdistan. "We are present on online platforms like Jabong, Myntra, Fashionara, Flipkart and Amazon. We are planning to expand on the e-commerce front in the near future. We will also come up with new franchisee stores and additional large formats," informs Kagzi.

Riot merchandises, on the other hand, are sold in nine exclusive brand outlets. Other platforms include multi-brand outlets and large format stores like Central, Reliance Trends and Bharti Wal-Mart. Products are also available on Riotjeans.com and portals like Myntra, Jabong, Amazon, Flipkart, and Paytm. 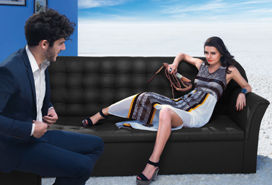 Fusion Beats and 109°F apparel are manufactured in Mumbai and Delhi, while Riot has an in-house manufacturing unit located in Mumbai that manufactures for various international and domestic brands like Pantaloons, Lee Cooper, Madura Garments (Louis Philippe, Van Heusen and Allen Solly), Lee, Shoppers Stop, Sypkar and Ink fruit among others. Their manufacturing plant can produce knitted hosiery fabrics and up to 5,000 garments a day. They also have an in-house printing section attached to the unit where printing work is done on fabrics and garments. "In addition to this, there are various manufacturing hubs/units based in Mumbai itself from whom we outsource when required," says Maheshwari.

Fusion Beats and 109°F use fabrics such as cotton, viscose, polyester, Liva, wool, acrylic and many other blended fabrics. "These are sourced from all over the country and overseas," informs Kagzi. Riot uses cotton, viscose, modal, tencel, polyamide, coolmax, recycled polyester, linen and blends. "Yarns are purchased from our repeated partners like Grasim Industries, Lenzing, Reliance, etc, who are major cultivators of organic fibres," says Maheshwari. 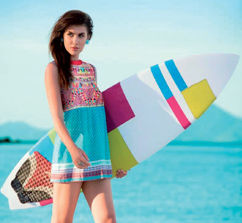 Overcoming the challenges of manufacturing in India

"A company usually faces challenges like technological obsolescence, poor productivity of labour and machines, irregular fiscal policies, multiplicity of taxes and levies, high cost of capital, restrictive labour and industrial laws, poor perception of Indian products, procedural problems in exporting, high tariffs, etc. These indirectly affect productivity, quality and costs, and it is likely to have an impact on the supply chain model. Elongated procedures have lowered investor's preference for India and this is not good for the economy. This gap has to be structured and transparency has to be brought in the tax laws by avoiding retrospective improvements," feels Maheshwari.

Kagzi suggests, "Currently, there is a problem in supply of adequate skilled labour in our industry. To resolve this, we should train new workers and then induct them into our production facilities."

"The garment industry is labour-intensive and is the second largest employing sector after agriculture. With the 'Make in India' campaign, we expect a lot of manufacturing for international buyers happening in India thereby, providing a boost to the sector," he says.

"'Make in India' is an amazing initiative that will bring gratitude and eventually benefit the country. This campaign has turned investors' focus on stocks that have helped in reviving manufacturing which was in a stagnant phase. It has helped in adding the X factor that was much needed by the garment industry. The government allows 100 per cent Foreign Direct Investment (FDI) in the textiles sector which backs the 'Make in India' programme. Supporting this initiative, we will be exploring the category of T-shirts," says Maheshwari. 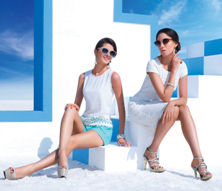 Ways to ensure 'Make in India' is a success

"Even though numerous steps have been undertaken to facilitate the campaign, several underlined initiatives will ease out the processes of doing business. Entry point has to be easy, initial barriers faced by manufacturers need to be lowered, and after entry a secure environment needs to be planned and created. Furthermore, improvisation of infrastructure, bringing reforms into labour laws, making investments in skilled labour force, implementation of Goods and Services Tax (GST) and most importantly, the approval procedures need to be swift. India is a country with humongous opportunities and requires support to leverage on it.

"To become a competitive nation, India needs to move forward to create a favourable environment for all procedures so as to take off smoothly. The relationship between the government and private sector (both foreign and domestic) needs to be harmonised. Indian companies have support from neighbouring countries which play a vital role in our economy; hence, a welcoming environment needs to be developed for them," maintains Maheshwari.

"We need the government's support for single window clearances for new projects. Prospective manufacturers must be provided facilities to set up units in India and should be given tax benefits. Labour laws should be made manufacturer-friendly," suggests Kagzi.